Only a few tourist attractions and events leave a 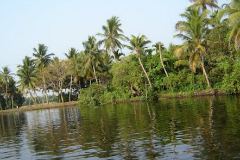 traveler with an unforgettable experience. In spite of reading guidebooks or looking at photographs or video clips, the event can exceed expectations. The boat races in Alleppey certainly fall into that category.

I had heard so much about the snake boat races and planned a trip to coincide with the Nehru Trophy Snake Boat Race. I chose this one, because unlike some of the other races that depend on the Malayalam calendar, this one is always held on the second Saturday in August, making planning easy.

A friend came to pick me up early from my hotel in Alleppey, because unlike most tourists and locals, who had to buy tickets and sit on the temporary bamboo decks along the banks of the Ponnumuda Lake, I was being taken on a houseboat to watch the race from the water. “We have to get there early to get a place close to the finish line,” he said.

A short cruise along the palm-fringed banks along the backwaters brought us to our chosen spot. I could understand my friend’s urgency for getting there early, because in spite of being there a good two hours before the race, there were at least twenty other boats that had beaten us to it.

It was a long two-hour wait, but fortunately, we had a good supply of food and drinks. Although people sat patiently in the decks on the shore or on the boats in the water, the sense of excitement in the air was palpable.

My friend filled me in on the history of 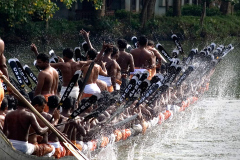 the Nehru Cup, telling me that a snake boat race was organized as part of the cultural entertainment during the visit of the late Prime Minister Jawaharlal Nehru in 1952. He had been so impressed with the event that he donated a trophy, which made it an annual event.

In response to my question, he also told me that snake boats, locally known as chundan vallam (chundan meaning serpent), had been in Kerala for over 200 years. They got their name from the design, which included a raised rear that was around 20 feet high and a tapering front that made it resemble a large serpent. These boats were originally designed for a local king who wanted a vessel big enough to carry around 100 soldiers and ammunition. Being in a region that was interlocked with waterways, this long and narrow boat was probably the only way he could ferry sufficient troops to match his rival’s army. As the story goes, not to be outdone, his enemy used a spy and got a similar boat made. The competition continues even today as local teams battle each other for the trophy, spying on each other’s practice routines.

After hearing the story, I couldn’t wait to set me eyes 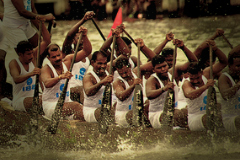 on the boats, and soon the frenzied shouts alerted me that they were nearing. I could hear the rhythmic chanting of the men on the boat and the excited cheering from the crowd. Then, two boats glided across the water in front of our boat, amazing me as around hundred oarsmen perfectly coordinated their movements to dip and pull in unison. Of course, I soon realized it was thanks to the man who stood at front shouting the count and the singers strategically positioned at intervals who clapped to help sync the rhythm.

Before I knew it, they glided past so smoothly and quickly that I wondered if it had been a figment of my imagination. Just then, another boat, which was lagging behind, passed us to remind me that it had indeed been real.

Not waiting for the announcement of the results, we made a quick getaway to avoid being caught in slow moving line of houseboats on the waterways. As I relaxed on the deck, I realized my heart was still pounding due to the frenzied excitement that was so contagious. This would definitely be top of the list among my memories of Kerala!