The Romance of a Kerala Backwater Cruise

With the Arabian Sea washing its western shores and many small rivers flowing down from the mountains and forming estuaries and lagoons where they meet the sea, the backwaters in Kerala are a unique ecosystem consisting of lagoons and canals in which saltwater and freshwater mingle. Freshwater flows into the sea during low tide. In the high tide, the process gets reversed, with seawater entering the canals. Thousands of lagoons and canals wind through Kerala and offer travelers the opportunity to experience life at a slower pace – the perfect way to unwind.

The traditional boat or kettuvallam was used in the yester 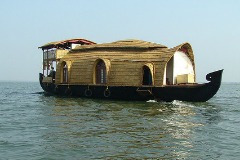 years for transporting cargo, especially rice and spices to and from the ports. Nowadays, they are an intrinsic part of Kerala’s tourism scene, as house boats have been redesigned as complete homes on board with bedrooms, dining decks, western-style toilets and kitchens. Tourists can spend a night or two on the water with meals cooked in typical Kerala style using fresh ingredients such as seafood, spices and coconut. Sitting out on deck sipping a cold drink or fresh coconut water and watching a colorful sunset or taking in views of the landscape, flora and fauna is often rated as the top things to do in Kerala.

The most popular cruises are from Cochin, Alleppey and 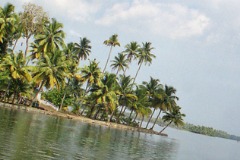 Kumarakom. Cochin or Kochi is the commercial capital of Kerala, with a colonial history. Beyond its urban boundaries are small lagoons, rivulets and coconut palm fringed islands that make for a charming half-day cruise.

Alleppey, also known as the ‘Venice of the East’, has hundreds of small canals that crisscross through the town. It is often the boarding point for cruises on the Vembanad Lake – the longest freshwater lake in India. A sunset cruise on the lake can be as spectacular as it is romantic. 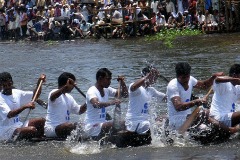 The nearby Punnamuda Lake is a hot favorite for watching the lively Nehru Trophy Snake Boat races in August.

Across the lake from Alleppey, Kumarakom comprises a group of small islands surrounded by green paddy fields and dotted with resorts along its shores. The bird sanctuary in the nearby Pathiramanal Island is a bird watcher’s delight.

Further south, Kollam – another port town and Kerala’s cashew center – has backwaters leading to the serene Ashtamudi Lake. Kuttanad can transport tourists back 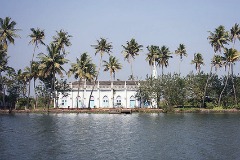 in time when life was simple, with a rural landscape, including banana plantations and ducks swimming along the canals. The northern districts of Kozhikode and Kasargod, present the most unspoiled scenery.

Kerala has its best weather from October to March and the same holds good for the boat cruise season. The monsoon months from June to September are a good time to beat the crowd, but the rain can play spoilsport – often not letting up for an entire day.