Thekkady – A green haven amidst the Western Ghats

On the Western Ghats running through Kerala’s Idukki District that borders Tamil Nadu, Thekkady is one of the state’s hill retreats. Surrounded by spice plantations and natural reserve forests teeming with wildlife, it is perfect for a relaxing vacation in the midst of greenery. In addition, many of the resorts in the area offer Ayurveda treatments, which in combination with the crisp mountain air make for a rejuvenating experience for the mind and body.

While the main agenda of a vacation in Thekkady is doing nothing, there are a few things that will keep visitors comfortably occupied while they enjoy the natural beauty of the place. 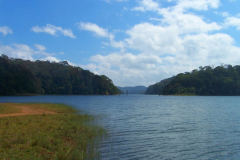 Spread over an area of around 777 square kilometers, the Periyar National Park is beautiful with diverse vegetation that ranges from hills and flat grasslands to lush tropical deciduous forests. The Periyar Lake, which is an artificial water body created when the Mullaperiyar Dam was constructed over the Periyar River, adds to the scenic beauty, sprawling across an area of more than 50 square kilometers.

The park, which was declared a tiger reserve in 1978 under the Project Tiger initiative, is home to over 35 animal species, including elephants, bison, spotted deer, sambar 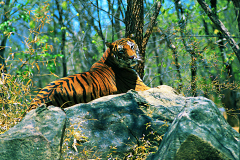 , langur, wild boar and wild dog, among others. The most popular way of viewing the wildlife and taking in the scenery is a boat ride on the lake, which gives better views of the animals on the shores of the lake or in the flat grasslands and hills surrounding it.

A more recent addition to the tourism activities is bamboo rafting, which is traditionally used by the tribal folk in the area to get around the waters. The ratfing experience involves trekking the initial distance through the forests up to the lake, accompanied by guides (many of whom are rehabilitated poachers), followed by a ride on the rafts.

Being the town nearest to the Periyar National Park, Kumily is the center for shopping and is a place where many of the hotels are located. It is a major center for spice trading. The town also has many Ayurveda centers that offer therapeutic massages at very reasonable rates. 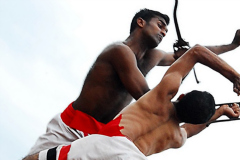 The center showcases Kalaripayattu, which is a martial art form that originated in Kerala. Every evening, after sunset, the center puts on display a performance of the art form by trained fighters, giving tourists a glimpse of the culture of the state. Watching the fights, which are filled with energy and precision, can be a thrilling experience.

Around 15 kilometers away from Thekkady, on top of a hill that is approximately 1337 meters above sea level, the Mangala Devi temple is a place of pilgrimage. It is open for prayers and ceremonies only once a year, usually in the months of April or May, coinciding with a full moon when the Chitra Pournami festival is celebrated. At other times, visitors need a special permit from the forest department to view it.

The temple is believed to be over 2000 years old and is built in the Pandian style of south Indian temple architecture. Besides seeing the ancient temple, visitors can also get spectacular views of the surrounding landscape from the top of the hill.

This small town is where the largest cardamom auction center is located. A visit to the area also presents views of the lush plantations in the surrounding area. Many spice tours originate from Vandamedu and take visitors on a walk through the plantations accompanied by a guide for learning about spice cultivation.

Thekkady presents a quieter side of Kerala compared to the bigger cities. Other than the monsoon months from June to September, which bring damp weather that makes outdoor activity impossible, it can be visited throughout the year. The best weather is from October to March. However, the area gets crowded in the months of December and January, when thousands of pilgrims from across India use the route to get to the Sabarimala Temple in the district.