Around an hour’s drive from Kerala’s capital 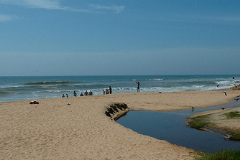 Thiruvananthapuram lies a quiet hamlet by the sea, which is known for its natural beauty. Unlike other parts of the coast, which are flat, red laterite cliff faces along the shoreline add a sense of drama to Varkala’s landscape. Its location is approximately 50 kilometers north of Thiruvananthapuram and 37 kilometers to the south of Kollam.

For tourists, Varkala has a mix of attractions, including a beautiful beach and a 2000-year-old temple. The town is also the venue of the Sivagiri Mutt – the religious center and final resting place of Sree Narayana Guru, a social reformer from Kerala who played an important role in eradicating injustices caused by the caste system. In addition, Varkala has some sights of colonial history, as the East India Company’s first trading settlement in Kerala was set up at nearby Anjengo.

Additionally, a couple of lakes in and around the town present the opportunity of a relaxing boat ride, and there are many Ayurveda centers, where travelers can treat themselves to rejuvenating natural therapies. 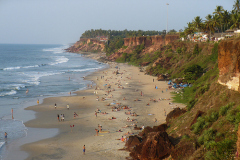 which gets its name from the Malayalam words ‘papam’ and ‘nasam’ that translates ‘destroying sins’. Most of the resorts and shops that cater to tourists are located on the cliffs along this beach.

While the wide stretch of sand is a great place for swimming in the sea, some parts of it are used by the locals for immersing the ashes of their departed relatives, after performing religious ceremonies at the nearby temple. The mineral springs near the beach are said to have curative properties, and locals visit it to take a dip in the waters or to have a sip of it, based on the belief that it will wash away sins. The water is also used for Ayurvedic treatments due to its medicinal properties.

Although the temple is believed to be 2000 years old, 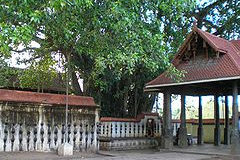 the present structure dates back to the 12th century. Vishnu is the residing deity of this temple, which is near the Papanasam Beach. Hindu pilgrims from southern India visit it to offer prayers in memory of their dear departed and to conduct the last rite ceremonies, including the immersion of ashes in the waters of the sea. The temple is built in the typical Kerala architectural style with sloping tiled roofs. An object of interest is an ancient bell displayed in the temple, which was washed ashore from a shipwrecked Dutch vessel.

On the cliff top, around 3 kilometers from the 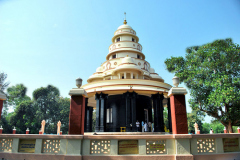 temple is the ashram of Sree Narayana Guru, where his tomb is also located. The religious center is managed by a trust controlled by followers of the great social reformer. Devotees from all over the state flock to the ashram to pay their respects to the departed leader. The largest crowds can be seen during the annual Sivagiri pilgrimage – a three-day event from December 30th to January 1st. Other important days at the ashram are the birth and death anniversaries of Sree Narayana Guru, which are celebrated in the months of August and September, respectively.

Anjengo, as it was called by the British, is the 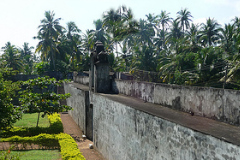 mispronounced version of the name derived from the words ‘anju’ meaning five and ‘thengu’ meaning coconut tree. The fort was built in 1864 between five coconut trees on a small plot of land given on lease to the East India Company. Located around 7 kilometers away from Varkala, it was the first trading settlement of the British in the state. The remains of the fort are a protected national heritage monument.

Although the fort is not as architecturally attractive as some other forts in Kerala, the site is of historical importance as several colonial powers, including the Portuguese and the Dutch, tried to take control of it. The adjoining cemetery has ancient tombstones that date back to the 16th century. The 130-feet lighthouse, which was built to guide British ships and the ruins of an old factory, built by the British, are other heritage sights that showcase the town’s colonial past.

This 924-feet long tunnel was built to extend Kerala’s waterway transportation system further south, beyond Varkala. Until it was constructed, Varkala was the southernmost point up to which goods could be transported from northern parts of the state. After the Diwan of Travancore, Sir T. Madhava Rao, commissioned the project in 1867 the tunnel took 14 years to build and was completed in 1880.

Around 6 kilometers to the north of Varkala, Kappil 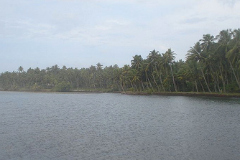 Lake is a picture of serenity. The tranquil waters fringed by coconut palms and the estuary where the lake’s waters merge with the Arabian Sea make this a picturesque spot. For active travelers, the nearby state-run boat club offers pedal boats for hire, which can be used to explore the area. The bridge across the lake is an excellent viewpoint for taking in the surrounding beauty. Vettekkada Beach, which is near the lake, is another beautiful beach in Varkala.

While Varkala may not have as many attractions as the bigger tourist cities and towns in Kerala, it presents the perfect option for a relaxed holiday in a spectacular setting. In addition, the elements of history and spirituality make it a relaxing yet interesting destination.