In spite of the assurances given by Lamayuru’s lamas about finding shared rides out towards Leh quite easily, we did not find any! It could be because tourist season was yet to begin; there just weren’t that many visitors while we were there. So in the end we hired a local cabbie, a retired army captain running a cab service, to drop us off at the village of Alchi, which is about 55kms east on the way to Leh. A friend had recommended a place to stay there and we decided to give it a try. It is within walking distance from Alchi Monastery.

The ride to Alchi was fun not just because of the fantastic scenery (which we were kind of getting used to) but also because of the retired captain’s friendly banter. He was eccentric and had some of the funniest things to say. A couple of teenage boys, staff from Niranjana Hotel, hopped in with us to be dropped off at the nearest town as they both needed a haircut. Conversation with them was easy. We learnt that the staff at the hotel was mainly from Goa – they come up to Ladakh during summers and then head back to Goa for the ‘happening’ winter season out there. The boys looked too young to be wandering around like this, though; they ought to be in school!

About one-thirds way to Alchi Monastery, the famed Indus (Sindhu) River came into view, flowing northwestward towards Pakistan. The highway runs along its right bank almost until Leh. When we had read about it in our history books, it was often referred as the ‘mighty’ Indus River so we always imagined it to be a huge mass of water pummeling across the country. But the water body we saw was a little more serene and narrower than our imagination! It’s only when you realize that this water originates in Tibet, flows across the entire northern part of India, crosses into Pakistan and finally empties into the Arabian Sea at the port of Karachi, that the word ‘mighty’ gains its significance!

The village of Alchi is about 2kms south of the highway, across the Indus River on its left bank. If we had taken a shared ride out of Lamayuru, we would have been dropped off at the highway and then would have had to either walk the 2kms or wait for another ride; I’m so glad we hired a cab! After crossing the river over a quaint bridge, a newly-tarred road led us from the banks to the village. It turned out to be a nice little settlement with stores and a couple cafes around the monastery complex. We went directly to Hotel Samdupling where our friend had called in advance to let the owner know of our arrival. There we were shown into a comfortable double-room with windows overlooking the hotel’s beautifully manicured gardens!

The monastery of Alchi is actually a monastic complex 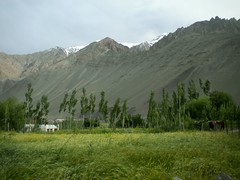 with three major Buddhist shrines and chortens set within a walled courtyard. What makes the shrines unique from the other monasteries we had visited so far was that these were built in the early 12th and 13th centuries by Hindu Kashmiri artisans hired by the then Hindu rulers and therefore, have a hint of Hindu influence in their architecture. In the evening, just after 4pm, Madhu and I stepped out of the hotel and walked towards the complex. A clean, narrow alley at the southern end of the village led us to it. To our left were rows of stores selling lovely Ladakhi & Tibetan jewelry and handicrafts. I knew I would see more of these in Leh, where the prices would be more reasonable, so even though we browsed the collection, I refrained from making a purchase. To our right were homes or hotels set within large, walled-in compounds, surrounded by vast fields that seemed to go all the way to the base of the surrounding mountains! Soon the stores were left behind and we found ourselves in a walled-in lane shaded by walnut trees on either side – it was beautiful and serene!

When we entered the monastic complex, we were immediately hailed by an elderly, traditionally dressed, Ladakhi gentleman who gestured us to follow him and led us to an ancient prayer hall, outside which a board announced it to be Kagyur Lakhang Gompa. We knew it was not one of the major shrines within the complex, firstly because this name was not listed in the guidebooks and secondly because architecturally it looked just like any other Ladakhi Gompa we’d been to. Nevertheless we entered and were over-awed by a lovely golden image of the Lord Buddha against the far wall. The caretaker claimed that it was made of pure gold entirely, but we doubt that! The walls were completely covered with fading murals and stacked with ancient, dust-covered texts. The caretaker let me light a diya for the Lord and then stood around smiling until we tipped him for his services.

We walked around the complex in a parikrama (clock-wise 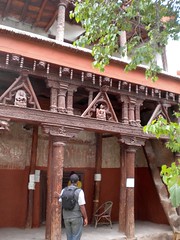 direction) and found that a lot of construction was underway; there were building materials strewn everywhere – not a pretty sight! The first shrine that we came upon was the lovely, three-storied Sumrstek Temple. The carvings on the wooden pillars of the porch and the carved wooden facade made the shrine look quite different from the usual monasteries of the area – we were immediately impressed! And yes, it did seem to have a Hindu touch to it. Inside, the prayer hall was even more impressive! There were large niches built in each wall. The niche in the back wall had a standing image of a tall (4.6m high) Maitreya – images of Manjushri and Avalokiteshwara flanked it on either side. The other niches had 4m high images of standing Boddhisatvas – it was a beautiful sight! Sadly pictures weren’t allowed inside.

After exiting the Sumrstek Temple, as we continued 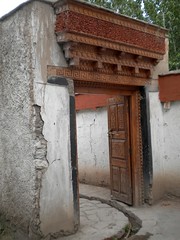 our parikrama, we came upon one of the loveliest entrance portals ever! It was a large gated entrance to the Vairochana Temple. The gateway had a fantastically carved wooden frame and it was very well-preserved. Inside, a small courtyard with trees and flower plants led to the temple. It is also known as a Dukhang or Assembly Hall as all the monks gather here for worship and prayers. The main deity here is the Vairochana with lovely murals of the 1000 Buddhas, Boddhisatvas and lesser-known deities.

The last major shrine in the complex was, for me, the best of all. It was the Manjushri Temple and it housed an unbelievably beautiful sculpture on a high platform in the center of the prayer hall. The sculpture was of 4 images of Manjushri seated back to back, each facing a different direction! They were painted in beautiful colors and looked extremely vivid – loved them! Four wooden pillars surround this sculpture, making a lovely enclosure. Three sides of the prayer hall have niches in them with an image of the Buddha in each. The main wall at the back has a large image of Manjushri on a throne. There were murals here too but none as nice as the ones in Sumrstek.

Later, we stopped at a German Bakery outside the monastery complex for some coffee and watched the crowd passing by. There weren’t many people yet but definitely more than in Lamayuru. After coffee we walked around the village but there wasn’t much to see or do, so we simply went back to our hotel and relaxed.

The following day we woke up early and hurried with our backpacks to the main village square where we were told we could board a local bus to Leh at 7am. However when we got there, the bus was already completely packed with the locals and their stuff. Many of the villagers take their field produce to Leh for sale and they had piled into the bus along with large jute bags long before the bus had even got to the square; we had absolutely no chance of getting in! So we let the bus go and sat down at a small tea-stall for some lovely breakfast of Omelets and Parathas with piping hot tea. The friendly tea-stall owner said that we could walk to the main highway across the Indus River from where we could easily get a bus or hitch a ride to Leh. It was only 2kms to the highway but I knew I wouldn’t be able to walk the distance with my heavy backpack. So we hired a local cab. We asked the driver if he could drop us all the way to Leh but he was busy, so we settled for the highway.

On the highway, we waited for nearly 3hrs for a ride. There was no shade to protect us but at least there was a stone wall on which we could sit and rest our legs. A lady from Alchi, who had not been able to get into the bus like us, waited alongside. She had a huge bag of peas that she needed to sell. Very few traffic passed by of which only a couple of trucks stopped when Madhu flagged them down and neither of them were going to Leh. We watched as an army truck pulled up with a bunch of laborers and parked by the side of the road. The laborers immediately alighted and started breaking down the huge boulders nearby into smaller pieces and then loading them onto the bed of the truck. It was steady, hard work in the blazing sun. We spoke to the officer supervising the work and he said that the rocks would be taken to a nearby construction area where they were in the process of building stone walls (like the one we were sitting on) to protect traffic from the deep plunge into the Indus River flowing below.

Around 11:30am a Leh-bound bus finally pulled up and stopped for us. It was a slow ride but we were just simply relieved to be on our way; didn’t fancy standing in that heat any longer! We realized that although Alchi was definitely worth visiting, we need not have stayed overnight. We could have started early from Lamayuru, asked the retired captain to wait for us for a couple of hours in Alchi while we toured the monastery and then driven on to Leh – would have saved us a day! But then we aren’t exactly on a tight schedule, so the additional day didn’t really matter that much!