Just about 5kms south of Shey, right on the highway, is the village of Thiksey atop which sits a very beautiful monastery complex.

Known as ‘Mini Lhasa’, because of its cascading architecture (quite like the Leh Palace), the monastery complex is one of the largest in central Ladakh. Till date, we have never spent more than an hour in any monastery but at Thiksey, there was so much to see that it took more than 2hrs to tour it all. And it turned out to be one of the finest monastery tours we’d been on¦

Leaving Shey at around 9am, we decided to walk the distance to Thiksey and hitch a ride, if possible. On the highway, we stuck our thumbs

out at every south-bound vehicle and finally, about a kilometer later, a Maruti Omni stopped for us. The friendly couple in it was heading to Hemis and when we asked them if they could drop us off at Thiksey, which was on the way, they happily asked us to hop in. They chatted with us all along the way and then dropped us off at the base of a foot-trail that climbed up to the monastery; apparently this is an easier route on foot than by the main motor-able road.

As we climbed up to the top, the trail took us to the 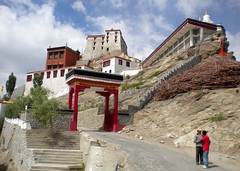 parking lot below the complex and from there an arched entrance welcomed us into the lovely monastery. As we continued on, to the left was a rectangular structure housing a restaurant, a museum and a souvenir store. The museum was not yet open but the souvenir store was and we couldn’t help but browse through it. It stocked some really good stuff and we ended up buying several necklaces, prayer wheels and wall-hangings as gifts for family and ourselves!

The monastery was at a higher elevation and there were steps leading up to it. However, before going there we noticed a board announcing 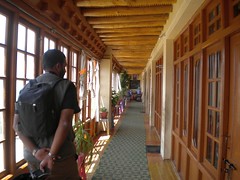 a school. Visitors were being allowed to take a look inside so we walked over as well. The entrance doors led to a narrow gallery with windows on the left overlooking the plains below and classrooms on the right. The school consisted of just about 4 small rooms with about 15 to 20 students – boys only – in each. When we walked past quietly, the kids peered at us curiously but continued with their work. A senior Lamaji graciously showed us around and even offered us some chai. We politely refused; didn’t want to disturb their school day any more than we already had.

At the entrance to the shrines within the monastery, we paid Rs.25 each as entry tickets and entered a lovely courtyard. The gallery surrounding the courtyard had fantastic murals on its walls. To the right, above the 2-storied gallery, was a red, brick structure, which housed some of the shrines. In the front, cemented steps led up to the yellow structure, which housed the assembly hall. The long, rectangular courtyard was divided in the center by a bed of flowering plants that covered its entire breadth – looked absolutely lovely and well-maintained.

We visited the assembly hall first and were struck by the ancient murals on its walls, the lovely golden thrones for the head Lamas and the fabulous idols of Buddha, Maitreya, Manjushri and other Boddhisatvas in the inner sanctum. Just as we were standing around gaping at all of this wide-mouthed, a small congregation 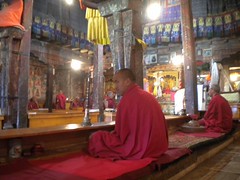 of monks gathered within the hall and went about setting things up for a prayer session. And then, for the first time in our lives, we witnessed the monks playing their gongs and trumpets and chanting as a group. All visitors were welcomed to sit in on this session and even take photographs as long as no flash was used and everybody remained silent. We, including many other visitors, sat over-awed as the proceedings around us lent a magical air to the atmosphere, giving me goose-bumps! It was another high point of our travels in Ladakh.

Later we visited the Gonkhang or Temple of Protectors, 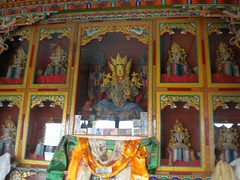 which was in the adjoining red building. This shrine was much more ancient than the Maitreya one with old paintings and idols that looked quite scary with their fierce faces and multiple arms. There was a Tara Temple as well with 21, wonderful idols of the Tara encased in a glass cabinet. I loved this room for the ornate carving on the wooden cabinets. A ledge against the wall  opposite to the cabinet provided seating for visitors who wished to sit awhile and meditate in that beautiful space; many visitors were doing just that!

The newest shrine in the monastery is a Maitreya Temple; it is also the most popular. It houses a fabulous 15m tall image of Maitreya seated in the Lotus position. It is the largest such statue, about 2 storeys high, in all of Ladakh and is unique in the sense that almost all other Maitreya images are either standing or sitting on a throne. The statue took 4yrs to complete and then was inaugurated in 1970 by the 14th Dalai Lama. We loved how grand the image looked, especially the intricately carved crown and jewelry that adorned it.

On our way back down, we stopped at the monastery’s restaurant and gorged on a simple lunch of sandwiches and tea. By then the museum had opened, so after the meal we went over to visit it. Located on a floor lower than the store and restaurant, the museum is a large display of Ladakhi artifacts spread over a couple of rooms. There were gorgeous Thangka paintings, wooden and metal sculptures, as well as unique Ladakhi household items as well. My favorite was a lovely sculpture of a standing Avalokiteshwara framed against 2 exquisitely carved wooden arches.

On a high after the wonderful visit at Thiksey, Madhu and I literally hopped and skipped our way back down to the main highway. And within a couple of minutes of standing around in the heat, a pickup truck stopped to give us a lift back to Shey. We squeezed ourselves into the front seat between the driver and his friend while they chatted with us like old friends – it was so much fun ! Instead of being dropped all the way to the village, we alighted a kilometer before, right in front of the Druk Padma Karpo school.

The Druk Padma Karpo school is an award winning venture, founded by the 12th Gwalwang Drukpa, a spiritual 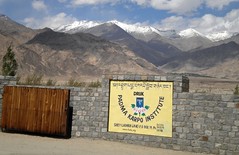 leader of the Ladakh region. The school enlists children from impoverished backgrounds living in the remote areas of the region and provides them with a world-class education including arts and sports. It opened in 2001 with less than 100 students but today has over 500 of them. It has won awards for its architecture as well as its eco-friendly initiatives. It is also listed in guidebooks as an interesting place for a visit. However, in spite of all this, it became known country-wide only after the release of the movie 3 Idiots, which filmed an important part of it here, on the school grounds.

As soon as we walked into the school grounds,

we were immediately struck by the beauty and austerity of the stone-walled buildings with Ladakhi-style window/roof trims. They were all one-storey, squat buildings with multiple rooms in which the classes are held. A young volunteer gave us a guided tour of the place, showing us the lovely classrooms and the hostel rooms where the kids lived. Interestingly, each hostel building was named after a mountain pass in Ladakh.

Later, we were taken to the fabulous Naropa Palace, which lies on the school campus. Unlike the other mud palaces we saw in Ladakh thus far,  the Naropa Palace looks every bit like a palace should, with its pagoda-style roof. Built in 2004, it is run and managed by nuns who live on the premises. Naropa was a 10th century Indian, Buddhist scholar, who was closely associated with Tibetan Buddhism. In Lamayuru we saw the cave in which he had meditated with his disciples. Here, in the palace’s prayer halls there is a large image of him flanked by images of Padmasambhava and Lord Buddha. While we stood around listening to the guide’s narrative, the nuns went around decorating the hall with colorful lamps made from flour and ghee. I chatted with some of them and they had tons of questions about where we were from and our (regular) lives outside traveling – loved the conversation!

By the time we got back to our hotel in Shey, Madhu and I were quite exhausted and happy to be back in the comfortable space that Whispering Willows provides. This was our last day in Shey as we planned to check out the following day, tour the Hemis monastery and then head back to Leh. We had loved our stay in Shey and would highly recommend it to all those wishing to see a beautiful Ladakhi countryside.

One Response to Day Trip to Thiksey Monastery