Of all the wonderful sights in and around Leh, the one place that truly touched our hearts was our visit to its Donkey Sanctuary. We had read about it briefly in the guidebooks and found signs advertising it throughout Changspa. Intrigued, we just knew that it had to be checked out and I’m so glad we did!

Founded by a South African traveler, the ‘Home for Helpless Donkeys’ in Leh is a shelter for all the old and/or sick donkeys, asses and mules that the farmers of Leh have no use for. Normally such donkeys are left to stray on the streets and starve with no one to care for them. Well, now the farmers have a place to send the donkeys instead of simply letting them go. We had no idea what to expect when we went looking for it. So we were quite pleasantly surprised with what we found!

Located north of Leh’s market area, it’s a good 20 minutes away on foot. We lost our way and misunderstood directions but finally managed to get to 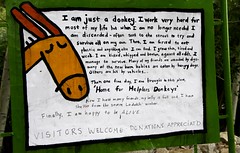 it, only to find that we were on the wrong side of the fence, on the opposite side of the main entrance. We could see the donkeys milling around; some even came to us out of curiosity and stuck their noses at us while we stood around wondering whether it would be appropriate to jump the fence or walk around it looking for the entrance. Luckily a local woman came by and helped us make the decision: she said ‘just jump’ and that’s exactly what we did. She sweetly called out to the caretaker of the sanctuary to let the lady know of the trespassers. We were warmly welcomed by her and the donkeys, of course, who surrounded us completely.

The sanctuary is a large piece of land where the donkeys get to hang out idling their day away. Near the main entrance is a shack where

supplies are kept for them along with bundles upon bundles of hay. It also has some rooms for the animals to sleep in during the harsh winters. There are no trees on the grounds so the caretaker sits under a little canopy that she’s built for herself to stay out of the sun. She keeps a keen eye on the donkeys and ensures that no fights break out. She is also responsible for their general care – feeding, dressing wounds, etc. She lives close by but hangs out in the sanctuary for most part of the day. She said that they get all their funding through donations of cash or supplies. She let us pick some hay out of the shack and feed the donkeys, which was way too much fun. I wished our nieces had been around – those little girls would have totally enjoyed the experience!

Just as we were about to bid farewell to the donkeys 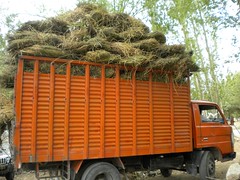 and their caretaker a huge truck pulled up, its bed filled to the brim with hay – more food for our friends! We stood watching as the driver expertly maneuvered the truck by the side of the shack and unloaded the hay into it through an opening in its roof. Just as this was happening, a car pulled up and a couple of men got out of it carrying large bags filled with carrots – even more food! They took the bags to the center of the sanctuary and immediately started distributing it to the donkeys that looked absolutely ecstatic about the treat – it was so much fun to watch! A few other travelers showed up as well, each with a few carrots in hand. I wish Madhu and I had come prepared with some treats for the donkeys too.

As we walked away, we realized how even travelers can make a difference to a place, if they really set their minds and hearts to it. This visit to the sanctuary was one of the nicest experiences during our travels and we have that South African traveler to thank for it!

Earlier in the day, before visiting the sanctuary, we had stopped 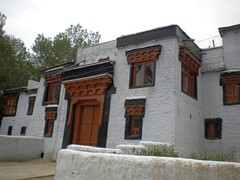 at the Sankar Gompa as it was (sort of) on the way. But at that time the Gompa doors were closed. A small board on its porch gave a number that could be called in case we wanted to visit the Gompa and there was no one around to help us. Madhu had called that number and whoever answered it had asked us to come back after 3:30pm. So after visiting the sanctuary we stopped by again to check but it was still closed. So Madhu called the number again and this time they asked us to wait for a few minutes. Soon a young Lama showed up with a set of keys and opened the doors for us.

Sankar Gompa is beautifully located in the middle of Leh’s 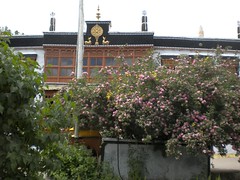 village area, some 3kms north of the market. We loved walking past the village homes and fields; it gave us a very different perspective of Leh. The monastery itself is located within a lovely courtyard surrounded by the residences of the Lamas. In the middle of the courtyard, right in front of the steps leading up to the prayer hall, is a landscaped area with flowering trees and flower bushes – it was well-maintained and quite eye-catching.

The front porch of the prayer hall has some exquisite paintings and wooden pillars with carved, colorful capitals. This itself was quite impressive but the interiors of the prayer hall were equally good. The walls and pillars were adorned with murals and silk hangings. Low prayer tables sat in rows in front of a 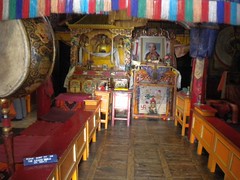 cabinet that was placed against the back wall. Enshrined within this cabinet were images of the present Buddha, the future Buddha (Maitreya) and the founder of the yellow hat sect to which this monastery belonged. I’m so glad we had a chance to see these lovely interiors – it’s totally worth a visit!

In the evening, after a brief siesta, we walked back to the market area, and visited the Chowkhang Gompa. Its entrance is almost hidden 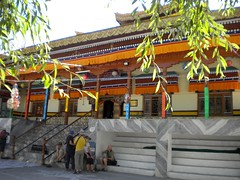 amongst the many store fronts that line the street. A few steps lead down to a lovely square, set at a slightly lower elevation than the streets outside; the Gompa sits right in the middle of this square! One step onto the courtyard and we felt like we were in a completely different world. Suddenly the chaos of the market outside ceased to exist and we were in a quiet, remote place where the only sounds were that of birds and visitors milling around or talking in hushed tones. A set of cemented stairs face the Gompa’s entrance and it looked like a wonderful place to sit alone and meditate as it was shaded by large trees.

A relatively new structure, the Chokhang Gompa complex is quite important as it houses the headquarters of Ladakh’s Buddhist association. It also

holds residential programs to learn Buddhism. The prayer hall sits on a raised platform and has a pillared gallery that runs all around it. Inside, its floors are wooden and have been polished to a high sheen. It’s a large, uncluttered hall with a lovely chandelier hanging from the ceiling in the center. There are windows on three walls, giving the place an airy, light feel. A lovely image of Buddha sits against the back wall.

This was one of our nicest days in Leh, although there were many more in which we did nothing but laze and try all the different restaurants on Changspa. We were now done with the sights within Leh, but we knew that there was plenty more to be seen around it as well, which meant that we would have to spend more days here than anticipated not that we were complaining!