After the long, bumpy ride from Padum to Kargil, we stayed there for the night to rest 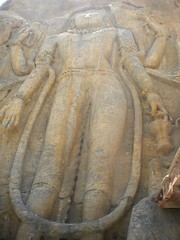 and make arrangements for traveling on to Leh. However, we realized that even before getting to Leh, there’s plenty to see on the way. So taking a shared ride was out. We spoke to the staff at our hotel and asked them to get us in touch with Mohd. Hussein, who had driven us to Panikhar in his Maruti Omni; his was the most reasonable cab rates to be found in Kargil.

Since there was quite a bit to see on the way, we decided to break the 200-odd kms journey to Leh by staying the night at Lamayuru, which is just about 85kms from Kargil. The monastery there is considered to be one of the best in Leh region. By the time we decided on all this and called on Mohd Hussein’s cab it was 10am in the morning. However, since we had less than 100kms to cover for the day, we weren’t worried.

The highway, NH1D, from Kargil onwards to Leh is in pretty good shape. At places where it’s not, the army is in the process of getting it fixed. The first few kilometers out of Kargil were rough and bumpy but soon it smoothened out and we relaxed enjoying the unbelievable scenery along the way. Our first stop was at the lovely statue of Maitreya in the little village of Mulbekh, some 45kms east of Kargil. The 9m high statue of the Maitreya Buddha is said to have been carved in the first century AD, which makes it older (and bigger) than the one we saw in Suru valley. It’s truly magnificent! A pretty 2-storied Gompa has been built around the statue. A small prayer hall within enshrines an image of the 11-headed Lord Avalokiteshwara in a glass-fronted, carved, wooden cabinet.  The walls have been painted with the images of the 1000 Buddhas, of which Maitreya (future Buddha) will be the fifth. A rectangular opening in the ceiling gave us a fabulous view of the murals painted on the floor above. We loved the atmosphere of the Gompa and although, it does not warrant an overnight stay in the village, is definitely worth a stop-by en route to Leh.

Before getting to Lamayuru, the highway wound through two spectacular passes – the Namika La at 12,200ft and Fotu La at 13,479ft. The peaks 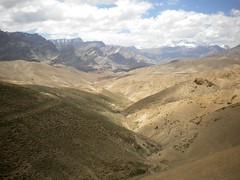 of the passes were no doubt beautiful but the ascents and descents were unbelievably gorgeous too; endless mountain peaks all around and deep valleys with a shimmer of water at the bottom! The force of the winds at the peak of Fotu La, which is the highest on the highway between Srinagar and Leh (yes, higher than the deadly Zoji La but nowhere as treacherous!), took us by surprise and we barely stood around for more than a minute!

At around 3pm we got to the village of Lamayuru where an ancient monastery has been built picturesquely into a mountain-side; from a 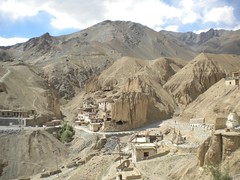 distance, the mud walls of the village homes blend into the brown, bare surroundings beautifully! It’s just off the highway with the village at the base of the monastery complex. Right next to the monastery, by the road leading up to it, is Niranjana Hotel where we were able to get accommodation for the night. We let go of Mohammed Hussein after paying him and thanking him for his fantastic cab service. A Lamaji who sat by the road selling entry tickets for the monastery assured us that we would be able to find rides to Leh quite easily the following day.

After a super-late lunch in the hotel’s restaurant and a brief but refreshing nap, we set out to explore the monastery and the village below. 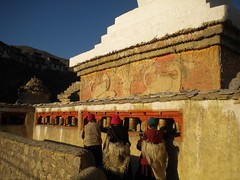 We toured the complex in a Parikrama, going around it in clock-wise direction. A continuous row of prayer wheels were placed under large, white-washed chortens and we turned each one of them as we walked along. Before us, three local, traditionally dressed women, with spinning, prayer wheels in hand, did the same. A rough cut sheep skin with long, white fur, hanging off their shoulders caught our eye. They smiled at us warmly and even agreed to let us take their pictures!

A lovely courtyard within the monastery led us into its ancient prayer hall. There were beautiful, albeit repainted, murals on the walls of the courtyard and prayer hall. Pillars within the prayer hall were adorned with fantastic silk tassels and large, ancient Thangka paintings hung from the ceiling. The main 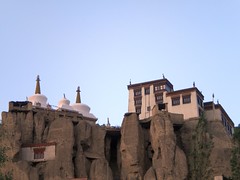 idol was that of Vajradhara Buddha – serene and enchanting! But Lamayuru’s monastery has one unique  feature – it was built around a little cave where the 11th century Buddhist Indian scholar, Naropa, spent several years meditating. Today it is protected by a metal grill, which was opened for our viewing by one of the Lamas. We were surprised at how small the cave was. A seated figurine of Naropa and two of his disciples have been placed here to signify the importance of the place.

Later in the evening we walked down the steep mountain-side to the village below. Unfortunately, although it looked pretty and 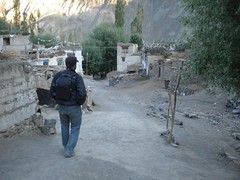 picturesque from a distance, we didn’t like the village once we were in the middle of it. There was litter everywhere and a narrow, stinking gutter ran right through the middle of it. We were surprised to find many small garden restaurants with continental menus catering to the hordes of foreign travelers in the area. The cafes looked inviting but the filth outside made us lose our appetites. Eventually, we sat at a roadside cafe sipping on black tea for a while and then climbed back up to our hotel. On the way we passed some fabulous green fields with tiny yellow flowers scattered all over – it was a beautiful sight!

At night, over a dinner of yummy, vegetarian pizza, we watched a game of the ongoing soccer World Cup in the hotel’s restaurant. It was a fun atmosphere with the hotel staff and other guests joining in to watch the game. Although I’m not really a soccer fan, I really enjoyed that evening!

The following morning, quite early, we visited the monastery again in the hopes of witnessing the Lamas chant during the morning prayer session. But when we got there we saw just one Lama sitting by himself praying softly. There was none of the bells and gongs we were hoping for!Apparently all the Lamas congregate with musical instruments only during the two annual festivals that are held here every year in March and July. Nevertheless, it was beautiful to be out there at that time of the morning. The Lamayuru monastery definitely deserved more than a stop-by visit and I’m so glad we had the time for it!