One of Ladakh’s most prominent monasteries is located in the village of Hemis, which lies about 49kms southeast of Leh and less than 35kms from Shey; we hired a cab for the ride. In the morning we checked out of the lovely Whispering Willows and set off for Hemis in a Maruti Omni, with two young Ladakhi lads who were running the cab service during their college’s summer break.

The route to Hemis is absolutely scenic with the Indus River to the right and green fields irrigated by it, all around. We couldn’t see the village right until we got about a kilometer from it and then just as we turned a corner, it suddenly came into view with the monastery hanging miraculously over it clinging to a rocky cliff-face – it was an awesome sight!

did all the climbing (which wasn’t much really) and we were able to park in a parking lot right at the base of the monastery complex. We immediately noticed that there were busloads of visitors here from Leh giving the place a touristy feel, unlike the other secluded monasteries of the region. And again because of this patronage, the Hemis monastery seemed a lot more well-preserved and under good care.

Considered to be the largest monastic institution in all of Ladakh, Hemis monastery’s courtyard is also one of the largest. The annual festival held here is quite popular especially because the monastery can accommodate hundreds of monks on its premises. The main shrines of the monastery are 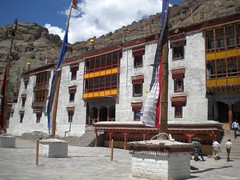 housed in the 3-storied structure, which stands atop a high platform, to the right of the courtyard. The other sides are enclosed by a pillared gallery, which has been painted in the traditional Ladakhi colors of red, yellow and black.

Unfortunately, for us the main assembly hall within the monastery was under maintenance and therefore not open to the public for viewing. But we were able to visit the other shrines, of which the one on the first floor was the loveliest with great murals covering every inch of the wall. The highlight of the shrine, though, was the intricately carved, gold-toned thrones, which are used by the head monks. They were colorfully painted and beautifully preserved. While we, including many other visitors, explored the shrine excitedly a lone monk sat and chanted quietly, oblivious to the chaos around him.

On the upper floors we visited two other shrines of which one, the Guru Lakhang, had a fabulous image of Guru Padmasambhava in all his glory. It was a tall image looking quite crowded in a narrow, rectangular space. The other shrine was dedicated to Lord Avalokiteshwara and had a long cabinet protecting some ancient 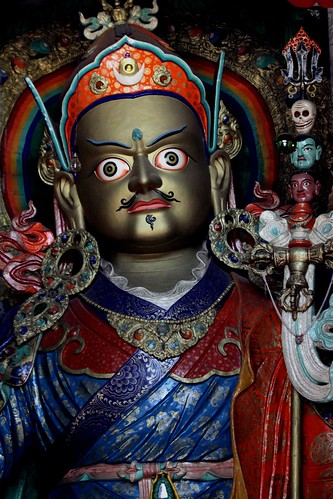 scriptures and images of Buddha, Maitreya and Tara. And then finally we climbed up to the terrace atop the monastery from where the views out to the village of Hemis and the surrounding mountains was spectacular – it was totally worth the climb!

Back in the courtyard, we cut across to the left-hand corner where lockers were provided for visitors to deposit their belongings before heading down to the museum where no cameras, phones or bags were allowed. Liberated from our luggage, Madhu and I toured the museum leisurely and simply loved it. Compared to the other monasteries, the collection here was of far superior quality and much larger too. The metal sculptures dating hundreds of years back and the exquisite Thangka paintings were our absolute favorites.

Overall, the visit to Hemis was quite nice and, though not as spectacular as Thiksey, was definitely worth our time. Later in the afternoon the kids dropped us back to Leh where we went around making arrangements for seeing the rest of Leh region. There’s way too much to see out here¦