The previous night we had enquired at Sonamarg’s market about getting shared rides to Kargil, our stopover destination before heading south to Zanskar valley. We learnt that around 8am in the morning many cabs, on their way to Leh from Srinagar, stop at Sonamarg for breakfast. We were assured that we would definitely find a couple of seats on at least one of them to drop us off at Kargil. So on the morning of the 20th, we got to our favorite Sonamarg eatery, Kargil Zojila Restaurant, at around 8am and sat down for breakfast. Just as we were finishing our meal, several cars stopped by. The restaurant owner, bless his heart, ran out, spoke to a few of the drivers and found us a Leh-bound Maruti Omni with 2 seats available for Rs.500 each.

As we left Kashmir behind and rode east, the scenery en route kept us absolutely mesmerized! 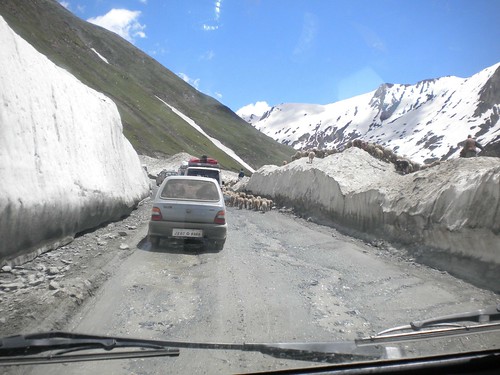 However, the entry into Ladakh was not all that easy; we had to cross the mighty Zojila Pass first! The word ‘Ladakh’ means ‘Land of Mountain Passes‘ and therefore it wasn’t surprising to learn that both its entry points – from Srinagar and from Manali – were guarded by such passes. We didn’t realize how treacherous these can be until our puny Maruti Omni started struggling up Zojila’s curvy, steep roads. The darned car’s engine sounded like it would 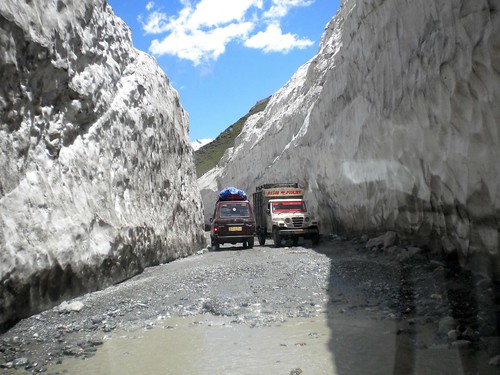 sputter and die any moment. It didn’t help that we had to share the pot-holed road with herds of cattle as well. Sitting in the front passenger seat, next to the driver, I had a perfect view of the scary roads and the driver’s struggle to keep the car safely on it. At times, the Omni would have to be squeezed to the very edge of the road to allow oncoming traffic to pass by, making us all literally gasp with fear. At the very top of the pass, the road was bounded by almost 10ft high piles of snow on either side! There were quite a few army personnel supervising the traffic and ensuring that no blocks occur. They must have belonged to a Kerala regiment as we heard a couple of them speak in Malayalam over their walkie-talkies.

Toppling over the edge of Zojila Pass is one thing, but there was also the fear that the car would just not be able to get across it. To maneuver some of the steep, curvy roads, we were all asked to climb out and walk the distance, while the van, relieved of its burden, lumbered up slowly and carefully! Madhu and I made a silent oath to ourselves that from now on we would only ride in powerful SUVs in the land of the mighty mountain passes¦

Although it was a struggle to get to the top of Zojila Pass, the descent into Ladakh was fairly easy and absolutely beautiful! From green Kashmir, we descended into a valley of bare, brown, snow-covered 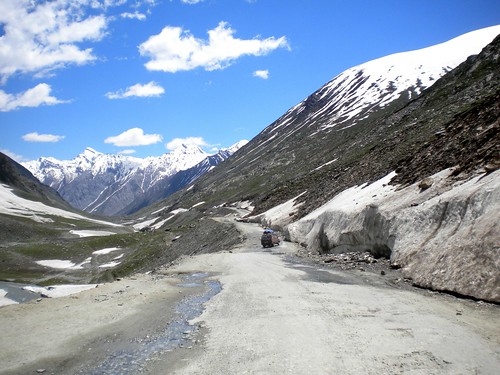 mountains with patches of green settlements – the contrast was immediately noticeable. We passed several army check-posts and memorials. Near the village of Drass is the famous Tiger Hill where our army fought a valiant, victorious battle against Pakistan. We wanted to stop by here and click pictures of the hill but our driver was not inclined to stop. He had been driving non-stop since the previous day from Jammu, was super-tired and couldn’t wait to get to Leh, his final destination. I hoped that he would at least stop in Drass for lunch but that didn’t happen either. So we got to Kargil sooner than expected at around 3pm.

Madhu and I found a comfortable, though expensive, room in a relatively new hotel hidden in a side alley just off the highway, which runs through the town. We were both hungry and extremely tired; the rattling ride in the Maruti van had given us a headache and we were dying to stretch out and rest! But we needed to eat first so we headed out to the market area. To our dismay, even after walking the entire length of the market area, we couldn’t find a single, good-looking restaurant to eat at. We eventually selected one of the many bakeries that line the streets, selected a few baked tidbits and settled down at their solo table for a delicious meal.

Most travelers between Leh and Srinagar stop at Kargil for a night to break the journey and rest. But many, like us, stop here to arrange their journey into the remote, seldom-visited areas of Suru and Zanskar Valley. The road heading to these valleys forms a T-junction with the Leh-Srinagar highway at Kargil. We were told that many shared jeeps and local and govt buses ply south from here but we weren’t very sure which areas in the valley were worth visiting; our guidebooks hadn’t given any detailed info. So we decided to enquire at the local JKTDC office but since it was a Sunday, their tourist information desk was closed. Disappointed, we walked to a nearby internet cafe and spent a couple of hours researching. Eventually, we figured out that the villages of Panikhar, Rangdum and Padum should be our stopover points, after which we would have to return to Kargil as there is no road beyond Padum. Most visitors, therefore, hire cars from Kargil for a round-trip into the valleys for a few days. From what we read, we figured that the car-rental charge for the whole trip of about 5 days should be around Rs.10,000 which seemed reasonable for a ride into what is probably one of the most scenic and remote regions of J&K state.

Armed with this info, we walked over to the taxi union stand to enquire about their rates. To our horror, we were told that a round-trip from Kargil to Padum and back, with one night stay included, would cost us Rs.17,000. An amount of Rs.1,500 would then be charged additionally for every extra night. More would be charged if we wanted to go sight-seeing around any of the villages we stopped at. So, in total, for a 5-night trip, we could expect to pay almost Rs.25,000! It sounded like robbery! The drivers at the stand justified the cost by citing terrible road conditions and the fact that the area is pliable for business only during 3 short, summer months, within which they have to make up for the rest of the year. As a cheaper option, we could get on a shared cab to Padum and then work our way back slowly, but shared rides leave at 4am in the morning from Kargil. Madhu and I knew that we were too tired to wake up in time for it. So we gave up and returned to our hotel where Madhu spoke to the staff for advice. Talking to them, he realized that it would be cheaper to hire taxis for just point-to-point drops without engaging them for the entire Zanskar valley visit. The hotel staff then helped arrange a private taxi for a drop to our first stop in Suru valley – the village of Panikhar. For Rs.1,600, it was agreed that we would be able to stop en route for photo breaks and also visit a large, Maitreya statue hidden in a village of the valley. More importantly, we would be able to leave at a more comfortable time of 8am the following morning.

Our night stay in Kargil didn’t give us much of a chance to explore it (not that there’s anything to see!) but it has definitely given us a feel of the place. First of all, the people look distinctly different from the Kashmiris; it was almost like we had entered a different country. Although, the predominant religion is still Islam, the people here have more of Central Asian features and physique, compared to the tall, statuesque Kashmiris. The language is Balti, which sounds a little gruffer than the Urdu-ish Kashmiri language. And we soon realized, it was not just the language that was gruff. In Kargil, there were no pleasant, warm smiles that we had gotten used to in Kashmir; instead there were blank, inquisitive stares and a grim look; it was a little intimidating making us feel like complete outsiders. Without Madhu by my side, I would have never walked Kargil’s streets on my own! However, on the other hand, the staff at our hotel and the boys at the bakery were nice and had spoken warmly. So we were quite confused with the experience! Overall, though, Kargil didn’t seem to be a place where one would want to hang out for too long; we couldn’t wait to leave for Suru valley the following day.