Around Leh : Leh to Likir and back

When we left Alchi we knew that there was more to see along the way to Leh but since public transport was almost non-existent we realized that the best way to see all of it was to hire a car from Leh. So after having toured the city and the monasteries to the south, we hired a cab from Leh’s taxi stand and started out at around 10am for a full day of sightseeing to the west of Leh.

Just outside Leh, on NH1D going west, is the poignant Hall of Fame. 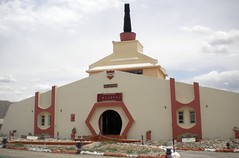 It was founded, and is being maintained, by the Indian army. Spread over two floors, the museum showcases the work and sacrifices of our elite forces since independence. There were models of the terrain over which the past wars have been fought, info on the flora and fauna of the region and the statistics of each war. But the most touching of these was a hall dedicated to those who lost their lives fighting for the country. It was difficult reading about their bravery; the hardest being a letter written by a son to his father just before he became a martyr – I couldn’t finish reading it completely!

The upper floor of the museum is dedicated to India’s fight over the Siachen Glacier region. The amount of money spent by the government here is just unbelievable! On display were the arms, ammunitions and gear used by the army personnel in those extreme conditions. It was very informative!

Although, a visit to the Hall of Fame can be quite disturbing, as it was to me, it is totally worth a visit – a definite eye-opener!

Our next stop was the Likir Gompa, which is about 52kms from Leh. The village of Likir is set about 2kms north of the highway and the road to it,

though not in the best condition, is quite scenic. It winds by the banks of the Indus River and then climbs up a mountain side to the village sitting atop – it looked spectacular! An arched entrance above the village homes welcomed us to the monastery. However, when we got there it was lunchtime for the monks and the Gompa doors were closed. So we took a break as well and ate at a small eatery just outside the monastic complex.

The first thing that came into view as we walked up 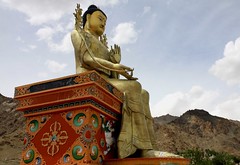 to the monastery was the unbelievably large statue of Maitreya Buddha that was seated on a high, beautifully carved platform, on the terrace of a 2-storied building. A staircase on the outside of the building led us up to the terrace where we could walk around the platform and observe it from up close; the Maitreya statue looked humungous as we stood at its base! Right next to the terrace, on its left was a small shrine with murals on the walls and brass idols encased in a cabinet. Either the shrine was relatively new or the murals had been repainted in recent times – they looked bright and fresh!

Steps from an arched doorway led us up to the 18th century monastery’s courtyard, which had pillared galleries on 2 sides, an assembly hall on the 3rd side and a 3-storied shrine on the 4th. 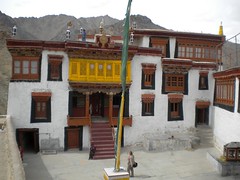 When we got there, young Lamas, probably on a break from their studies, were lounging around. Some of the youngest ones among them (surely not older than 12) were running around playing and teasing each other – it was so much fun to watch! Later, when a senior Lama climbed to the terrace above the galleries and sounded a gong, all of the kids dispersed and things became quiet. Then a group of monks gathered in the assembly hall and a prayer session, similar to the one  we witnessed in Thiksey, began. Here, as well, visitors were welcomed to sit in on the session and watch quietly. We did so for some time, enjoyed it as much as we had at Thiksey and then left to tour the rest of the complex.

The shrines within the monastery were gorgeous with some really lovely idols in each of them. My favorite 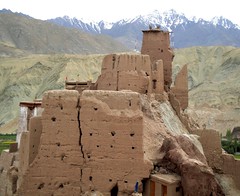 was one of Sakyamuni Buddha with a mural of Tara framing it against the back wall – it was absolutely gorgeous! Another shrine in the complex was dedicated to Avalokiteshwara where the idol was really nice too. Since most of the visitors were still in the assembly hall listening to the monks’ chanting, we had these shrines to ourselves and were able to explore it quite leisurely!

On the way back from Likir, we stopped in the village of Basgo, which has the ruins of a 16th century palace and two 18th century Gompas. They sit spectacularly atop a craggy cliff and almost completely blend into the brown mountain-side. We walked around the ruins and were rewarded with wonderful views of the Indus valley below, with green fields on either bank. A caretaker showed us inside both Gompas, which had lovely, ancient idols of Buddha and fabulous murals – they were probably the most atmospheric Gompas we’d been to.

And then our final stop before being dropped back to Leh

was at the ‘Sangam‘ (confluence) of the two rivers Zanskar and Indus. We were driven about a kilometer off the highway, down by the river from where we could clearly make out the muddy waters of the Indus colliding with the clear waters of Zanskar – we’d never seen anything like this before; it was quite mesmerizing! The sun was just about setting behind the mountains when we got there, making the place look quite serene and beautiful! It was a fabulous end to a very nice day of sight-seeing!

2 Responses to Leh to Likir and back!