As the bus pulled into the big, bustling town of Leh, I felt happy to be back 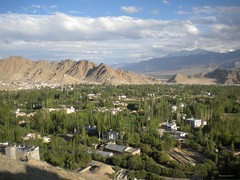 in civilization and happy to see the crowds milling about. After having spent the last couple of weeks in remote villages with just a handful of people around, Leh’s chaotic market scene felt wonderful! However, after the long, tiring wait in Alchi for a ride to Leh and the subsequent bumpy, 3hr bus ride into town, I didn’t expect the day to get any better. So I was in a bit of a grumpy mood when we took an auto from the bus station to Changspa, a street where most of the backpacker-friendly, budget hotels and restaurants are located. We hadn’t researched in advance about stay options so we wandered along the street aimlessly, which annoyed me further. I was sure we would end up at the first hotel we came across, no matter how bad it was, as we were too tired to explore further. But to my utter amazement the first hotel we came across turned out to be Zambhala Inn, which was brand new with large, nice rooms and even better bathrooms; moreover it was very reasonably priced. We praised the Lord, checked in and lazed the afternoon away!

Once the capital of the region of Ladakh, Leh is today the administrative capital of the district of Leh, which is the second largest district in India after Kutchh in Gujarat! At an altitude of about 3500m it is connected to the rest of the country via NH1D to Srinagar in the west and via the treacherous Rohtang Pass to Manali in the south. For centuries Buddhism and Islam have coexisted here peacefully and that accounts for the many monasteries and mosques in town. Over the years, its picturesque location, trek-able landscape and unique culture have attracted millions of visitors from all over the world, making it one of India’s top tourist destinations!

In the evening, when the heat of the day had subsided a bit, Madhu and I decided to check 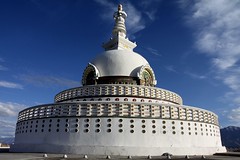 out the Shanti Stupa, which could be spotted from anywhere in town as it is located at the end of Changspa, on the top of a steep hill. Most guidebooks don’t advice visitors to attempt this hill on their first day in town as it is quite a tiring climb and would not be advisable until the visitors are properly acclimatized. This isespecially true for visitors who fly into Leh from much lower altitudes and therefore, definitely need to give their bodies a day or two to acclimatize before attempting anything strenuous. Since Madhu and I had been in high altitude areas over the past few weeks and have already had our share of altitude sickness, we weren’t afraid of attempting it on our first evening in Leh.

Built by a Japanese Buddhist group called ‘The Japanese for World Peace’, the Shanti Stupa has a place of pride in Leh’s landscape. It took about 8 years to complete and was built to commemorate 2500 years of Buddhism and to promote world peace. The temple next to the Stupa was the first to be built and was inaugurated by the Dalai Lama in 1985, while the Stupa itself was inaugurated in 1991. Funds for it were contributed by the then Prime Minister, Mrs. Indira Gandhi, the state government, the Japanese group, local Buddhist monasteries and even the local Leh residents.

A motor-able road runs up to the Stupa from the base of the hill but for the rest of us, who are on foot, steps have been carved into the mountain-side overlooking Changspa. From the base, looking up, the climb looked quite formidable and it didn’t disappoint. Madhu and I took several breaks while climbing but at every break it was wonderful to gaze out at the town of Leh spread out before us. It took us a good 45 minutes to get to the top but eventually both the climb and the views from the top ensured that it was a time well-spent.

At the top we emerged at the back of the Stupa wherewe spotted the temple; 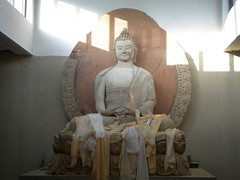 we decided to visit it on our way back. As we walked out to the front of the Stupa, we spotted an under-construction prayer hall. Out of sheer curiosity we walked into it past its open doors. The hall and walls were completely bare but against the back wall was a fantastic sculpture of a seated Buddha; it was a beautifully serene image! The throne on which the sculpture was seated looked incomplete but had some wonderful carvings on either side. Strands of cloth lay spread over the Buddha’s lap; not sure what they were going to be used for. I’m so glad we stumbled upon it; not sure if we’ll get a chance to see it after it’s completed.

We climbed up the white-washed Stupa observing thecolorful carvings on its exterior walls. I was disappointed to see that they were quite crudely done. However, a seated sculpture of a preaching, seated Lord Buddha placed in a niche built into the Stupa, more than made up for the carvings – the sculpture was quite stunning and well-made. We walked around the Stupa for which a wide gallery has been built. I felt that the Stupa was far more impressive from afar than up-close. 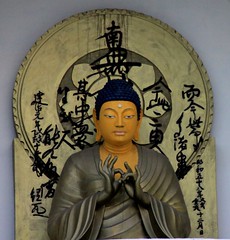 In front of the Stupa a large terrace with railings overlooks Leh town and is a wonderful place to lounge in, watching sunrise or sunset. We were lucky enough to be there just before sunset and then hung around till it got dark and the crowds started thinning.

On the way back we stepped into the little temple and were impressed to see that, albeit small, it was quite ornately decorated with beautifully carved idols, lovely silk Thangkas and silk fabrics. Donations for the maintenance of the Stupa and the temple were being accepted in the neighboring office.

Later we strolled through Changspa and had a wonderful time browsing through the stores and eyeing the various cafes and restaurants. There were quite a few internet cafes and travel agencies organizing treks, 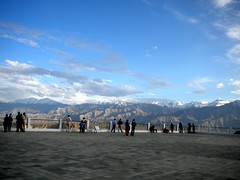 jeep safaris, river rafting, etc. as well. Because of all these amenities, Changspa is the hot-spot of most travelers in Leh, especially the backpackers. They were grungy young men and women in hippie-cool clothes with an attitude to match. They could be seen lounging in cafes with a smoke and/or coffee, and in restaurants with beer and music. They didn’t look like they were interested in sightseeing per se; they just seemed to be experiencing Leh at a completely different level than us regular travelers. We learnt that a majority of them were Israelis, on their year off after having completed their mandatory army service. Over the following few days, one of our favorite pastimes became sitting at the porch of one of the cafes and watching this crowd as they milled around aimlessly! Leh’s laid-back attitude had drawn us in as well and we could think of nothing better to do but lounge around like the rest of the crowd – it felt wonderful!