In the center of Leh, perched atop a hillock, blending almost completely into the mountain-side, is its ancient palace. Most of the city’s historic quarters are spread at the base of this hillock. On our 2nd day in Leh, we decided to explore this part of town, which was just about walking distance from Changspa.

Built 400 years ago by the then King Sengge Namgyal, 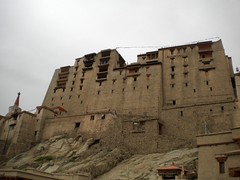 Leh Palace is said to have been modeled after the Potala Palace in Lhasa, Tibet. In the 19th century, when the Dogra kings took over Ladakh, the royal family abandoned the palace and fled to the neighboring village of Stok. Since then the palace has been in ruins until a recent initiative by the ASI and state govt brought some life back into it. Unfortunately, a lot of the damaged parts have been reconstructed completely instead of being restored. Nevertheless, today it is an important tourist attraction and is definitely worth a visit.

To get to the palace, we walked over to Leh’s market area where the town’s Islamic past is represented by a Jama Masjid that sits snugly in a corner flanked by stores on either side. We were quite disappointed with its location and setting. It had a freshly painted, white with green trim, facade but that didn’t help much! Most old mosques we’ve visited were set beautifully within walled-in, landscaped courtyards. However, here the mosque was right in the middle of a crowded market and we couldn’t even identify its entrance from the rest of the store fronts around it; rather sad! 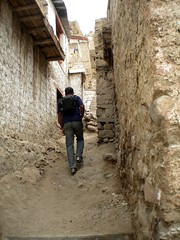 area via a narrow alley and suddenly found ourselves in a completely different world. Here the homes were all traditionally built with mud and looked quite ancient. There was a quiet, laid-back air to it unlike the chaotic market scene that we had left just two blocks ago. We asked for directions to the palace and were simply told to continue in the uphill direction as that would eventually lead us to our destination. We passed stray cows and young children playing in the alleys. Women smiled warmly at us while they went about their daily chores, washing clothes or utensils outside the homes. It would have been a very pleasant stroll had it not been for the filth around¦

Climbing up the hillock towards the Leh Palace, we spotted an elderly Lama sitting patiently by a low wall on the boundary of the palace complex. He gestured us to visit the Gompas within the complex first and we immediately agreed. The first one w 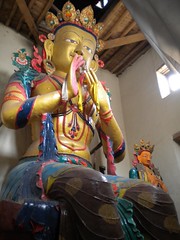 e went to was called Chamba Gompa. Also known as the Red Temple, the Chamba Lhakhang was built sometime between 1400 and 1430 AD by the then ruler of Leh. Inside, it enshrines a fabulous 3-storey high statue of Maitreya (future Buddha) with figurines of Avalokiteshwara and Manjushri on either side. There were many faded murals on the wall, lending the Gompa a very ancient, sacred feel. A board announced that restoration work is ongoing on the paintings. I wondered if the work was really a restoration or just a repainting of the murals!?!

Further up to our right was the Changzik Gompa, which was much larger than the first one. It had a lovely wood-carved ceiling with a skylight in the center allowing plenty of sunrays to pour into the vast hall. A glass-fronted, wooden cabinet sat against the entire length of the back wall. In the center of it was the main deity of the shrine, the 1000-armed, 11-headed Lord Avalokiteshwara. The rest of the cabinet was filled with ancient scriptures. The walls were covered with ancient paintings that seem to have been preserved quite well.

The third shrine within the complex was called the 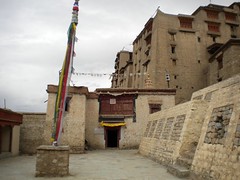 Soma Gompa and it sat right across from the Changzik Gompa. It had a small walled-in courtyard with the prayer hall in the upper storey of the 2-storied monastery. The prayer hall here was much smaller and a lot less ornate than the other two within the complex. However, its setting was the nicest. A terrace surrounding the prayer hall overlooked the old town and gave splendid views!

Later we walked up to the entrance of the palace where a newly-built gatehouse sat to its left. Itserved as the ticket counter selling entry tickets, which were just Rs.5 each. Even though, the front facade of the palace that faces Leh’s old town is not very impressive (it looks more like a huge prison with small windows ) the newly redone entrance to the side of the palace looks quite marvelous. From here its unique cascading architect 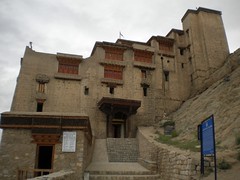 ure is clearly visible lending it a regal look. The entrance door frame has been, thankfully, beautifully restored. Supported on two pillars, the wood work above the doors looked absolutely wonderful and intricate.

Inside, though, the palace was a huge disappointment! It had nothing except bare, dark corridors with small, bare rooms branching off in every direction; there was just nothing to see.We climbed up to the top floors of the palace, as far as we could go, in search of finding something interesting b 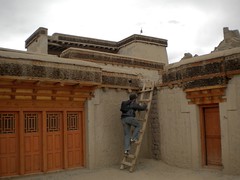 ut found nothing! The only room of interest was a small shrine with lovely images of Buddha and Avalokiteshwara. The pillars in the room were adorned with lovely silk hangings while beautiful Thangka paintings hung from the walls. Apart from this, we skimmed through the rest of the palace, pausing only to gape out at the scenery from the many windows and small terraces.

Before exiting the complex we decided to take a quick tea break. We had noticed a dilapidated building at the base of the palace with a small board announcing ‘Old Town Cafe’ outside its entrance. We entered through here and found ourselves in a courtyard with steps leading down to the rooms below. Following directions pasted on the walls of the courtyard, we descended these steps and came upon two rooms, one of which led to the kitchen of the cafe while the other was the 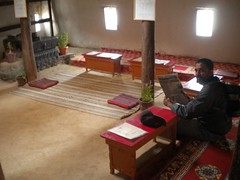 seating area. We entered the seating area and were pleasantly surprised to find a lovely room furnished with traditional Ladakhi furniture of mattresses and low tables. There was a small water feature against one of the walls while another held pamphlets and brochures regarding the work of a social group that is working towards preserving the Ladakhi way of life. We sipped tea and munched on cookies in this tranquil setting, enjoying the lovely space!

Overlooking the Leh Palace is the neighboring Namgyal Peak, atop which sits the ruins of Leh’s first recorded royal residence. When the Leh Palace was later built, the one here was converted into a fort. Today it stands in ruins and looks neither like a fort nor a palace. The only way to get to it is via a steep foot-trail, which takes ones breath away. We climbed all the way, huffing and puffing, and were rewarded with more fantastic views of the old town. At the top, it was nice to wander around the ruins aimlessly. There were 2 shrines as well, which looked ancient but well-preserved.

On our way back, just below the palace complex, we stumbled 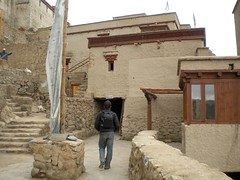 upon the Munshi House. Built around the same time as the Leh Palace, this lovely house was originally the residence of the then King’s secretary. It is a traditionally built, 2-storied house with a lovely courtyard. However the prettiest parts of the house are the lovely, wooden balconies, which give its facade an unbelievably grand look! In 2003, the house was taken over for restoration work, which is still on-going. The work is being managed by the Ladakh Arts and Media Organization. Once the restoration work on the facade and interiors is complete, they plan to convert the house into an Arts Resource Center for the town. When we walked in to explore the place, we saw photographs of the work in progress, an exhibition of paintings by children and some posters advertising the work of the organization; it was all quite interesting!

By the time we descended down to the lanes of old town and walked back across the market area, back to Changspa, Madhu and I were super-exhausted! We weren’t suffering from any altitude sickness, but walking and climbing at that altitude is definitely more strenuous than usual. Thank God for Changspa and its restaurants! We happily refreshed ourselves at one of our favorite eateries and then hurried back to our lovely hotel room for a brief siesta.

There’s lots more to see in and around Leh but we decided to take it easy and do it all at a leisurely pace. The town has just the right atmosphere for a chilled-out vacation and we were certainly in no mood to hurry things along!