During our one day halt in Rangdum, we had learnt that no taxis could be hired for a ride into Zanskar valley … there was just no means of arranging one! The only way out was hitching a ride on vehicles heading in that direction. So we packed up, checked out of the tourist bungalow, walked to the lone tea shop (others hadn’t opened for the season yet) and settled on its chairs outside. We knew that very few vehicles would pass by, especially since it was still early in the season for tourists to pour in; we were in for a long wait. But what we were most afraid of was that the few vehicles that did show up would be completely full with no spare seats for us! Madhu joked about being stuck in Rangdum for days, unable to hitch a ride out. I didn’t find it particularly funny, though; after having spent the previous night cold and shivering with a bad headache and lack of breath (altitude sickness!), I was definitely in no mood to stay longer – I desperately needed a hot shower and a warm bed!

Thankfully, our luck held out. After about 2hrs and 3 cups of tea, 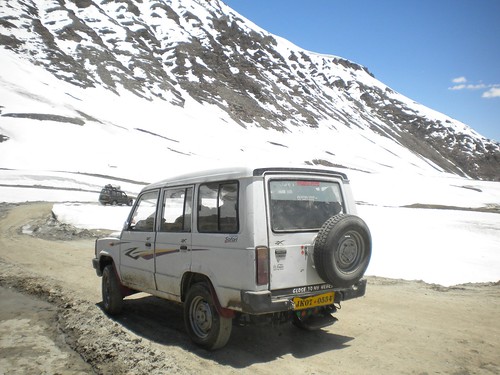 one of the SUVs that pulled up to register at Rangdum’s police check post was hauling goods from Kargil to Padum. The driver had only brought along his teenage son and a friend of the kid. He agreed to take us to Padum for Rs.400 per seat; we would have gladly paid twice as much! We stuffed our backpacks in the back along with all the other things they were lugging, and squeezed ourselves in the front alongside the driver – not entirely comfortable but doable!

The drive to Padum was absolutely gorgeous, which I enjoyed in spite of my ill-health; the pot-holed, almost non-existent road didn’t help matters either. The Tata Sumos seem built especially for this kind of terrain. 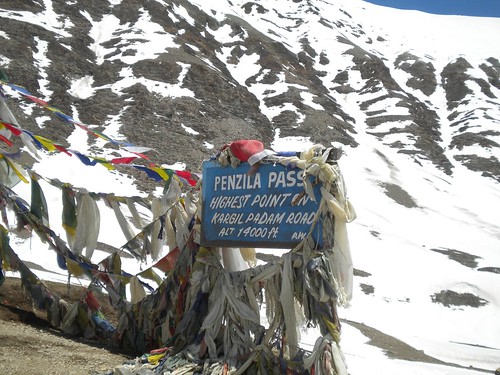 It definitely doesn’t boast of a comfortable ride, but is able to power across gushing streams and large craters quite confidently. Bumping along, about 40kms later, we got to the peak of Penzila Pass, the mountain pass which connects Suru with Zanskar valley. There was snow everywhere and it was quite windy. We got out for pictures  and to take in the lovely landscape, but it was too cold to stay for long. From here the view out to Zanskar valley was absolutely breath-taking; a vast expanse of flatlands riddled with small pockets of blue water. A few kilometers downhill, we had a fantastic view of the Drak-Drung glacier before us. This large mass of slow-moving ice was magnificent in its magnitude and location; have never seen anything like this before!

As we descended into Zanskar valley, we started to encounter small settlements of mud homes that could hardly be called villages. Men and women could be seen tending cattle or working on the road, clearing rock and debris caused by landslides and fast-moving streams. The road from Kargil to Padum had only recently been cleared of snow by the army and there was still plenty of work left to make it completely pliable. As we approached the first of the homes since crossing Penzila, we saw some young girls place a large jacket smack in the middle of the road and look smugly in our direction. Our driver smiled to himself, slowing the car and eventually stopping right before the jacket. Immediately the girls ran over and gathered near the driver’s window, chatting with him excitedly and giggling all at the same time. After a minute or two, the driver pulled out a 10-rupee note and handed it to them. The girls happily grabbed it, laughed some more and then withdrew the jacket from the road, indicating that we could now proceed.  We later learnt that the young women of these remote villages often do this at the beginning of every season. After almost 8 months of isolation during the harsh winters, they eagerly await visitors and the chance to talk to outsiders and this was their way of making sure visitors stop to chat. The money they ‘charge’ for removing the jacket is just a token amount; a fun ritual for them! It was so touching!

When the Sumo finally pulled into Padum at around 4pm, 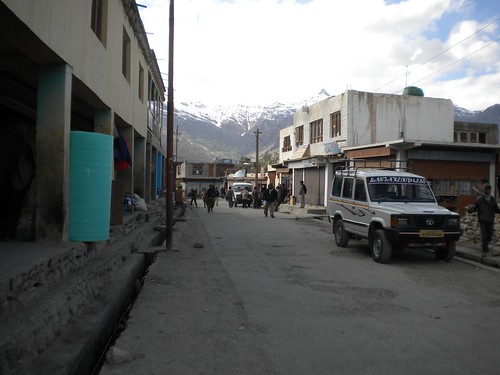 we were relieved to see that it was a proper village, almost a small town. We were dropped off at the first junction where I sat myself along with our bags by the side of the road under a large prayer wheel, while Madhu went around looking for a suitable accommodation.  He took more than half an hour to look through the many guesthouses that line Padum’s main road and eventually selected Mark’s guesthouse, which turned out to be really nice. We checked in immediately and after a hot shower, I spent the rest of the evening indoors trying to relax and acclimatize my body.

Padum is the administrative capital of the Zanskar region. 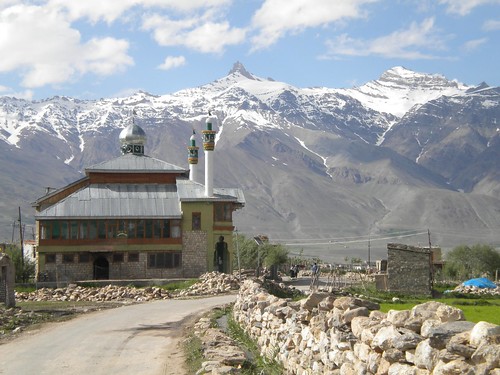 It is a fairly large settlement with a lovely mosque in the center and an ancient monastery at the top of a small hillock overlooking the village. It serves as a base for travelers and trekkers who wish to explore the area and therefore, has all the basic amenities: guesthouses, restaurants, stores and even an internet cafe; after 2 nights of tasting rural life in Suru valley, this felt like heaven!

We decided to visit the Stakrima monastery on the following day 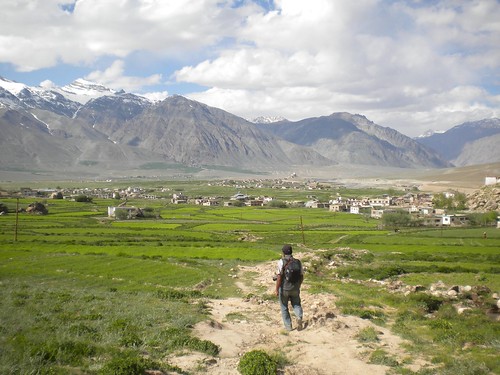 when I woke up feeling relatively refreshed. The climb to it is an easy walk well, at least for healthy individuals, which I couldn’t say for myself unfortunately. What should have been a 15minute hike took me more than 30 minutes. The only consolation was the route: at the suggestion of a passerby we had steered off the motor-able road that leads to the monastery and had instead walked up the hill cutting across large fields. As we climbed higher, the view of Padum got better and better. It looked like a green oasis nestled at the bottom of a ring of bare, snow-tipped, rocky mountains; it looked truly gorgeous!

From the outside the monastery didn’t look architecturally impressive. 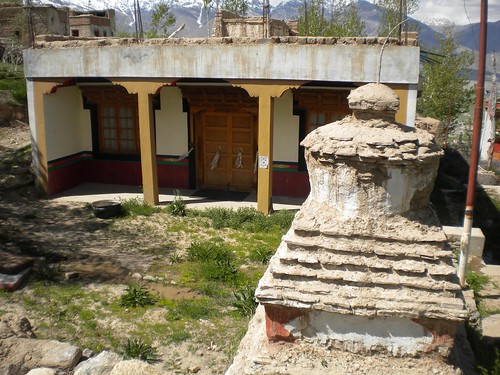 It was a one-storey flat-roofed structure with decaying walls and an unkempt courtyard. We were keen on taking a peek inside, but the doors were locked. A couple of young, smiling kids, with whom we shared some candy and biscuits, went off in search of a Lama who could open the doors for us. But even after half an hour of waiting, no one came by. So we gave up – took pictures of the courtyard and facade of the monastery and left.

In the evening we took a cab to the village of Sani, which is about 5kms north of Padum – we had passed it on our way into town. The monastery there is renowned and we figured that we had just about enough time to pay it a quick visit. 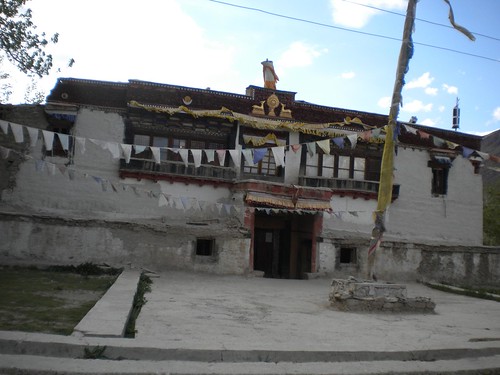 The drive took about half an hour and we entered a fairly large village with lovely, traditional Ladakhi homes and white-washed chortens around every corner. Unlike Padum’s Stakrima, the monastery in Sani was nicely enclosed within a large, well-kept courtyard. Even though it looked a lot older than Stakrima, its 2-storey facade looked regal and in relatively good shape. The taxi driver noticed that the main doors were locked and immediately offered to go looking for the resident Lama. Madhu and I sat under the porch of the monastery and waited patiently. But it wasn’t really our day ‘coz the driver returned 20 minutes later looking quite disappointed – the Lama was nowhere to be found! Oh well…

Trekking is one of the top activities in the Zanskar region. Its out-of-the-world landscape, remote setting and relatively gentler slopes provide one of the best opportunities to explore on foot. We knew we couldn’t leave without trying it out a bit ourselves. But it couldn’t really be done without a guide and/or porter who would know their way around. We enquired at a couple of trekking agencies and finally selected Snow Leopard Conservation, which specializes in arranging multi-day treks with ‘home-stays’ – overnight accommodations at the homes of the local Ladakhis. There Mr. Tashi suggested a 5-day round trip into the valley and back, which would give us a chance to visit the remote Phuktal monastery as well.

On reading about trekking in the region, Madhu and I had found that one of the most popular treks was a 6 to 7-day one from Padum to Darcha (HP), from where we could hitch rides back to Leh. It’s not supposed to be a very difficult trek, in spite of its length, which gave Madhu and me hope that we were fit enough to attempt it. However, the trek involves crossing the mountain pass, Shingo La, which, Mr. Tashi said, was still covered in plenty of snow and therefore, cannot be attempted by the uninitiated. We were a bit disappointed but took his advice and agreed on the 5-day itinerary instead. We decided to start a couple of days later in order to give me a day to rest and regain some strength – Lord knows I needed it!