South of Leh, on the way to Manali, lies the village of Shey with a palace and a Gompa that were rumored to be worth visiting. Its surrounding villages also have some of Leh’s other prominent monasteries. So we decided to stay in Shey for a couple of nights to explore the area. We hired a cab for the drop but decided to first make a detour to the village of Stok to visit its palace and museum.

Madhu engaged the cab from Leh’s taxi stand, which is close to the market area. As expected, the cabbies have fixed rates, decided upon by their union, for the day trips around Leh. Thankfully, these rates were relatively reasonable and not as atrocious as the ones in Kargil and Zanskar.  Stok doesn’t really fall on the way to Shey, so we agreed to pay for a round fare to there and back, and then additionally for the drop to Shey.

The drive to Stok was short and easy with relatively good roads. 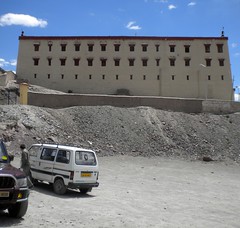 Built in the early 20th century, the Stok Palace became Ladakh’s royal family’s official residence when they had to flee Leh on the arrival of the Dogra kings. It sits atop a small hillock, which is said to be made of glacial deposits of pebbles, overlooking the Stok village. It is 4 stories high and has a nicer facade than that of the Leh Palace. We parked in the huge parking lot at the base of the hillock and then trudged up to the palace on foot.

We climbed up a few stairs and entered the palacethrough an arched entrance, finding ourselves in a lovely, square courtyard. Funnily, even though the palace is a 4-storied structure, the courtyard we entered seemed to be on the 3rd floor ‘coz there was just one more floor above this level. We immediately noticed that the interiors had been given a fresh coat of paint and everything looked to be quite nicely maintained. 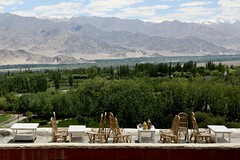 A pillared porch surrounded the courtyard with small, potted plants placed along the edges. In the middle of the courtyard was a cement pedestal upon which a few Mani stones and a tall, prayer flag were placed.

To our right, at a level above the courtyard, using a few of the rooms of the palace, was a cafe. It had indoor seating but had seating on the adjoining, narrow terrace of the palace as well. From here the views out to the barley fields below and the mountains around was truly magnificent. We made a mental note of stopping by here for a coffee after touring the palace. But as it turned out, we just didn’t find the time.

None of the rooms within the palace are open for viewing but I guess that’s because there’s nothing really to see. From our experience of Leh Palace we knew that Ladakhi palaces are architecturally very simple with hardly anything grandiose within. However, Stok Palace has converted a couple of the rooms on the floor above the courtyard into a museum of sorts by putting out on display some of the artifacts, jewelry, household items and garments used by the royal family during their stay in Stok. We were able to tour these rooms and absolutely loved the stuff. Our favorite was the royal headdress worn by the queen. It was studded with blue turquoise and Lapis Lazuli gems – it looked brilliant and quite unique!

After the museum, we visited the shrine within the palace. Just outside the shrine was a small hall which had been converted into a picture gallery with photos of the royal family and their life in Stok – it was 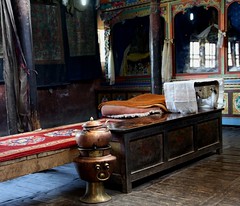 intriguing and my favorite part of our visit there. Inside the shrine, a friendly Lamaji let us take pictures and explore the room at leisure. As befitting a palace, we found the interiors to be lavishly adorned with paintings, murals and silk wall-hangings. We found a few items on sale as well – small prayer wheels, locally-made silk pouches and a roll of paper with Buddhist prayers hand-written on it, all quite reasonably priced. Madhu and I enthusiastically bought one each of the silk pouch and the prayer roll as souvenirs. Proceeds from such sale go towards the maintenance of the shrine.

Just as we were exiting and saying our goodbyes to the Lamaji who was still chatting with us, he suddenly mentioned that there were not many visitors to Stok on this day because most were at the Phyang monastery, attending the one-day festival there. We were completely taken by surprise; we had no clue about it. Attending a monastery festival was definitely on our wish-list. So when we heard of this one, we hurried back to our cabbie and requested him to take us to Phyang as well before Shey. For a reasonable, additional amount he agreed immediately!

Phyang lies off NH1D, some 15kms west of Leh. So we backtracked north to Leh and then headed west. As we turned right towards the village of Phyang, the landscape was quite flat on either side of the road but in the distance, sitting pretty atop a hillock, the Phyang monastery could be seen quite clearly. There was quite a bit of traffic heading towards it and when we got to the village, it was chock-a-bloc with cars. Security personnel directed all incoming traffic to a parking area while we alighted and got to the monastery on foot. This was the first time we had seen so many visitors in any monastery in Ladakh. There were rows of stalls selling jewelry and Tibetan artifacts and offering food and games – it was just like a fun fair! On the whole, there was quite a bit of excitement in the air and Madhu and I were brimming with anticipation!

Built in the early 16th century, Phyang Monastery is one of just three monasteries that belong to the Drikung Kagyu sect – the 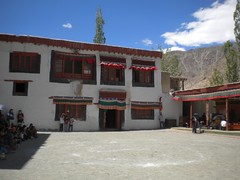 others being Lamayuru and Sharchukul – in Ladakh. Annually, on the 2nd and 3rd day of the 6th month of the Tibetan caledar, sacred dances are held here. And on July 9th, that’s exactly what we were there to witness. We got to the monastery complex at around 2pm and weren’t sure if we had already missed out on the dances. However, we saw a huge crowd gathered on the fringes of a bare courtyard; they all seemed like they were waiting for something to happen and the courtyard looked large enough to hold a dance, so we joined the group.

Only after we wedged a place for ourselves beside the waiting crowd did we notice the row of monks sitting in a shaded gallery on the right of the courtyard. Some of them were holding musical instruments like gongs and trumpets, while the monk at the head of the row was the vocalist. TV crew from some channel showed up with their paraphernalia and went about setting it up in anticipation of the dance. We wondered how long we would have to wait but were surprised to see things stirring within a few minutes of our arrival.

First the gongs were set off and then slowly the head monk started chanting. His voice didn’t come across very clearly, though, and when the trumpets took off we could barely hear him. Then a group of musicians showed up and walked along the periphery of the courtyard. And finally masked figures started emerging as well from a small door at the back of the courtyard. They were exactly as in the photographs I’ve seen 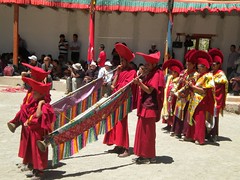 of Ladakh festivals: draped in colorful robes with fiery-looking masks and swords in hand; it was a complete feast to the eyes! Within a few minutes the entire courtyard was filled with performers of all sizes, from the youngest Lama to the biggest! However, we soon realized that the dear monks cannot really dance. Not only was the music quite uninspiring (it sounded more like a drone), the dance moves were even worse – none of the Lamajis were coordinated and some of them looked downright lost! I’m not really sure what Madhu and I were expecting – of course, one can’t expect monks to be dance experts or performers – but we were bored within just a few minutes. When things didn’t improve, we quietly exited the courtyard. 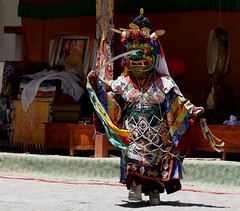 is a simple, single storied prayer hall. Its interiors looked similar to that of the other monasteries we had seen thus far except for the central image, which was enclosed within a glass cabinet – a huge, crowned statue of Maitreya Buddha. We had read somewhere that Phyang’s monastery has a huge (probably one of the largest) Thangka, which is unfurled once in a few years on the day of the festival; we wondered if it would be unfurled this year (just testing our luck)! We spoke to a Lama with considerable hope and although he wasn’t sure which year this event would happen he assured us quite confidently that it’s definitely not happening this year. We left a little disappointed.

Overall, the trip to Phyang didn’t really live up to our expectations! We had expected something a lot more exciting and dynamic. We hung out for a few more minutes browsing the stalls outside the monastery and then returned to our car, asking the driver to drop us off at Shey as soon as possible!