There are many ancient monasteries in the Zanskar region but visiting them all is not really feasible as it can get both time-consuming and tedious. We researched a bit and finally decided on visiting the ones in Zangla, Stongde and Karsha, which were listed amongst the best in the area. Stongde lies on the way to Zangla, which is about 35kms northeast of Padum. We hired a cab to cover these two for the day; Karsha was left for later.

Padum has a very strong taxi union with ridiculously high rates for day excursions to the nearby monasteries. Madhu and I were appalled when we were quoted more than Rs.3,000 for the 70km round trip to Zangla and back. The taxi drivers’ justification for such high prices was similar to what the Kargil guys had told us about their taxi rates to Zanskar: a very short tourist season of about 4 months in which to earn a living for the entire year. Aziz, the owner of Mark Guesthouse, said that we shouldn’t pay more than Rs.1,000 for the trip and Madhu was determined to find someone who agreed to this rate. And he eventually did! He found a taxi driver from Kargil who was in Zanskar on an errand and would be returning to Kargil in a couple of days. Instead of sitting around, he was more than willing to make some money on the side. And since he didn’t have to adhere to the Zanskar Taxi Union’s rates, he agreed to do the round trip, with a stop at Stongde for Rs.1,000 – we were thrilled!

The road to Zangla is not quite as bad as the road into Padum; in fact, it seemed newly tarred and in relatively good shape. We later learnt that the govt is connecting Leh and Padum via Zangla and the new road now goes at least up till Zangla; work is ongoing for the stretch beyond. Once completed, it will ensure that Padum doesn’t have to depend only on Kargil for connectivity. Another road, also under construction, will connect Padum to Darcha (currently a trekking route) in Himachal Pradesh ensuring further connectivity of the Zanskar region with the outside world. By then I guess the valley will not be as remote and hard-to-reach as it is currently. This would mean more facilities and access for the locals, and therefore, a better quality of life. But, on the other hand, it could also mean uncontrolled development and gradual disappearance of the traditional, eco-friendly, Ladakhi way of life, which seems to have been preserved and nurtured beautifully over the past centuries. So none of the travelers we met in Zanskar were entirely sure if they were happy about the new roads or not¦

Zangla is a tiny village at the northeast end of Zanskar region. 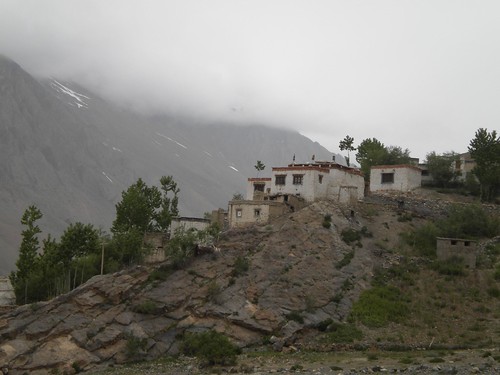 It has an old nunnery (monastery run by female monks) and a dilapidated palace both perched atop small hillocks overlooking the village. We visited the nunnery first and were greeted by an elderly female monk who smiled and warmly gestured us to follow her. She showed us into a newly-built prayer hall, which had a shrine dedicated to the Dalai Lama and small idols of Tara enclosed in a cabinet alongside. Madhu and I were at first confused because we were expecting to see an ancient monastery, not a new one like this. But once we stepped out, to our relief, the lady gestured us to continue following her to the original nunnery.

The female monks live around these places of worship and 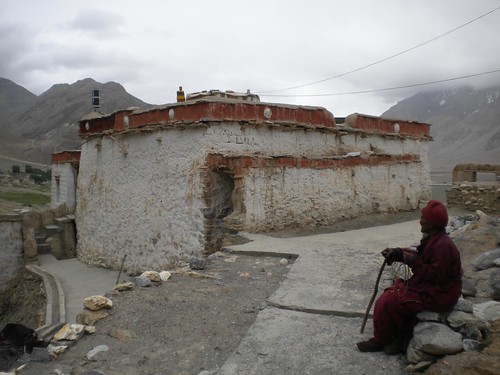 do all the house-keeping work on their own. We saw a few of them in their dark red robes serenely going about their chores, their faces creased and etched with the hardships brought on by the harsh Ladakhi weather. One elderly nun sat near the monastery with prayer beads and a walking stick in hand. Madhu asked if he could take pictures of her and she shyly agreed. She couldn’t help smiling and looking away when Madhu tried to get a close-up of her deeply etched face – she was too cute!

The atmospheric old nunnery turned out to be just as we expected: 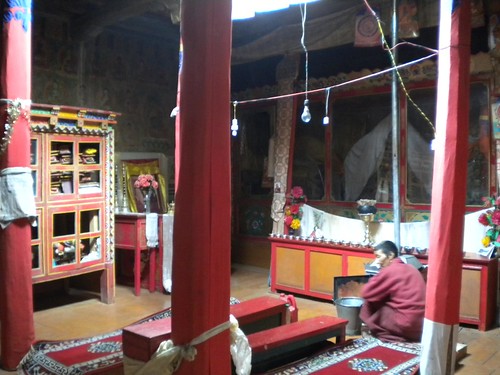 serene and wonderfully ancient! Its walls, which had been once covered with colorful paintings today have only a hint of them. Unlike the richer monasteries, the pillars here were bare with just one or two worn silk tassels adorning them. Enclosed in a glass cabinet is the monastery’s main idol, Lord Avalokiteshwara. Against a side wall was a cabinet filled with ancient scriptures. A large skylight in the ceiling allowed the morning sun to pour into the dark hall, creating a dramatic play of light on the ancient walls. The nun graciously allowed us to take pictures.

The warmth of the nuns of Zangla made our visit to their nunnery extremely special – it was a wonderful start to our day!

We were then driven across the village to its southern end, 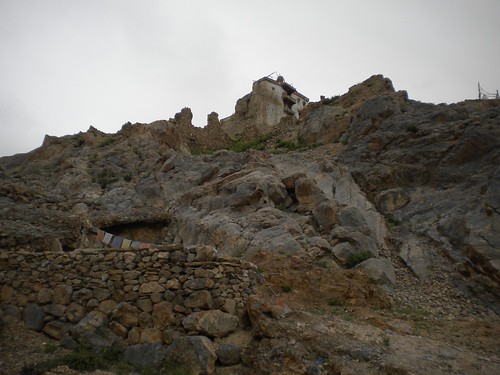 where the palace sat atop another rocky hillock. The car took us half-way up and then we clambered on foot the rest of the way to the ruins. A couple of days prior, when we were waiting to hitch a ride from Rangdum to Padum, a SUV with 2 Hungarian couples and the present king (yes, the king) of Zangla, stopped by. We chatted with them over cups of tea and learnt that the Hungarians were architects who had volunteered to work on the restoration of the Zangla palace during the summer. The king had picked them up from Leh and was bringing them to Zangla when we met in Rnagdum. So as we climbed up to the palace ruins, we spotted the architects standing on the terrace, waving to us.

Entering the palace was like entering a big rubble of stones and mud. 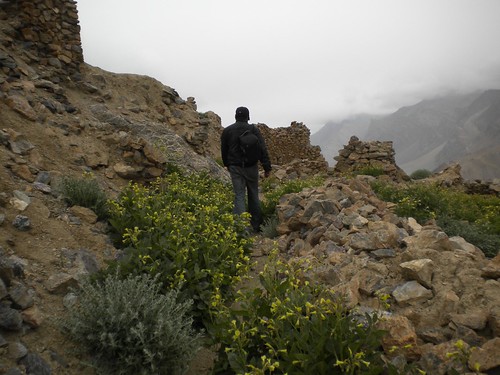 There was no recognizable entry way or porch, just a gaping hole in the wall, through which we entered into a cavernous hall and then climbed 2 stories up on rickety, wooden ladders till we joined the architects atop. The terrace was just a large mud deck, portions of which had collapsed completely. The architects enthusiastically showed us around, taking us to the room, which was the reason for their presence in Zangla. Apparently, back in the early 19th century, Hungarian scholar Alexander Csoma had stayed in this very room during his stay in Ladakh. He is a well-known literary figure in Hungarian history, credited with being the author of the first ever Tibetan-English dictionary, 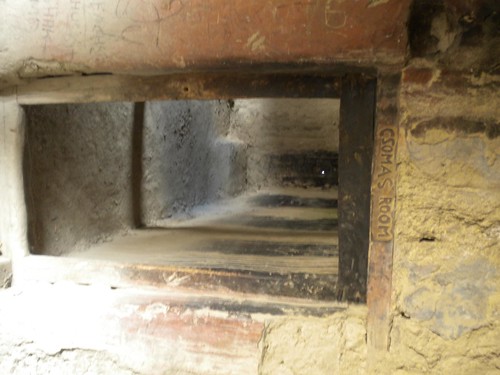 which he incidentally wrote during his stay here in 1823. Because of this, the Hungarian govt has been financially supporting the restoration of the palace. Using these funds and their own time and knowledge, the Hungarian architects have been working on the palace since the previous summer. They hope to get most of the work completed within the next couple of months. Looking at the state of things, though, Madhu and I felt a little skeptical of their optimism – they seemed to be a long way from making the place look like a coherent structure again!

Right by the deck is a small prayer room, which has some wonderful wooden idols of Buddha and other Boddhisatvas. As we stepped in, 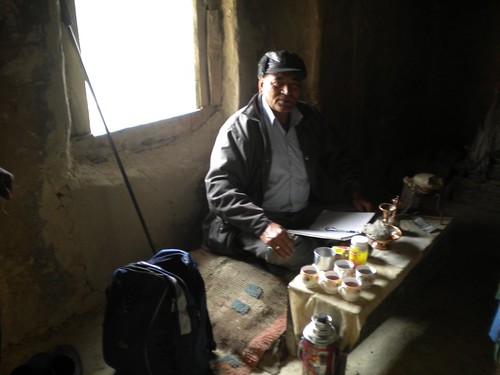 we saw the king sitting next to a window, praying and reading out of some religious texts that were placed before him on a low table. We chatted with him for a bit and learnt that he now lives, with his family, in a newer home within the village at the base of the hill. He is in the process of building and setting up a guesthouse, which would be ready by the time the road between Zangla and Leh is completed; just in time to welcome the flow of travelers that it is sure to bring! He is quite lucky that because of the Hungarian connection, his family’s home is also being restored without much of a personal expense. By the time the new road brings in hordes of tourists, his palace will be ready for ticketed public viewing¦

After sharing some Ladakhi butter tea with the architects and the king, we bid them goodbye and headed back to our car, immediately resuming our journey back. Our next stop was the lovely monastery complex of Stongde. 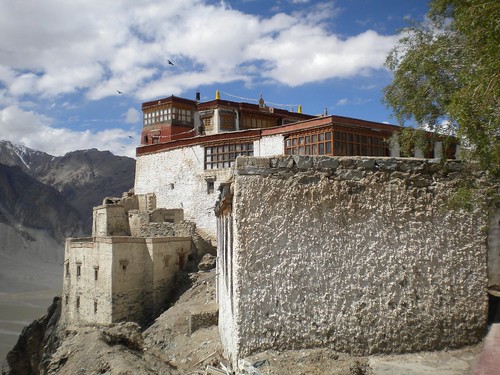 It sat atop a rocky cliff and getting there required some serious driving skills. There was practically no road except for a rocky pathway with tire tracks that seemed to lead up to the monastery. Thankfully, our driver turned out to be a resident of the village of Stongde and knew his way around easily. At the entrance to the monastery complex, he personally walked over and came back with a senior Lama, who graciously offered to show us around. 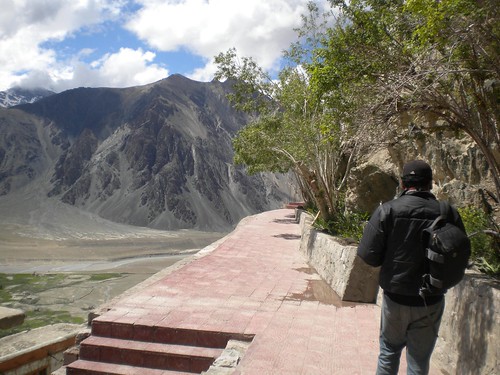 and led us across a tiled edge of the cliff, which literally took our breath away! To our right was the cliff with its landscaped trees while to our left was nothing! The cliff just fell away to give us one of the best views we’ve had of Zanskar. Before us was a vast flatland with the green oasis of Stongde village in the center. The snow-capped mountains formed 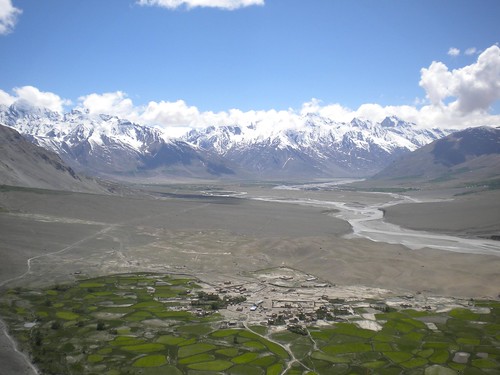 a beautiful semi-circular ring around this and the whole view looked picture-postcard perfect! The monasteries are set in a cluster beyond this tiled stretch within traditional, Ladakhi, white-washed structures. Behind us, close to where we had parked the car, was the Lamaji’s residence. Even though he had walked on ahead towards the monasteries I almost couldn’t tear myself away from the unbelievable view before us¦

We were led to a couple of prayer halls, which were set around a central courtyard. The main hall was on the upper storey and had a pillared 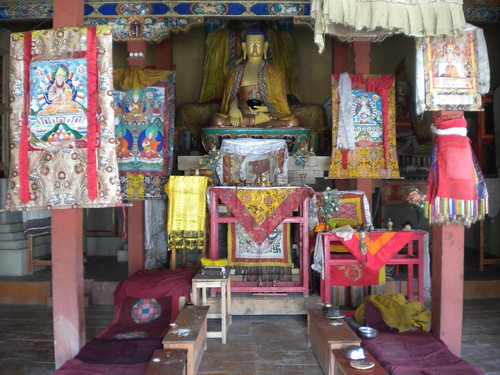 porch in the front. The doors to both halls were beautifully carved in wood and colorfully painted. Inside were seated images of the Lord Buddha while the halls were decorated with lovely, worn Tangkha paintings and tassels. There were cabinets full of old scriptures and texts as well. But the most interesting and eye-catching were the colorful, wooden masks that hung from the pillars of the smaller prayer hall. I’ve seen these being worn by monks while dancing during Buddhist festivals – they looked unique and wonderful!

On our way back to the parking area, the Lamaji asked us if we would like some tea; Madhu and I nodded ‘yes’ in unison – couldn’t let go of an opportunity to chat with a Lamaji! He took us and our driver to his cute little residence where he seated us in a small room that had windows on two adjacent sides. We sat on thick rugs with low tables before us. The Lamaji spoke to us with our driver as the interpreter. His questions were the usual: where were we from, what do we do for a living and are we enjoying Ladakh! It was a fun conversation over cups of sweet, milky tea. A few young Lamas appeared out of nowhere and stood at the doorway peeking in at us curiously.

Later as we started to leave, the Lamaji requested us to drop the young Lamas off at Padum’s market as they had some errands to run. We were more than happy to help! In the car I passed around some candies and all of them accepted it shyly with broad grins and a sweet ‘Juley’ (love the word!).

Our day trip around Zanskar gave us a glimpse of the unbelievable scenery here – there are just no words to describe it. We thought nothing could beat our experiences in and the beauty of Kashmir, but Ladakh is proving us otherwise – after all beauty comes in all forms and shapes¦