Today was our last day of sight-seeing in Mandu. The only places left to explore were the monuments within the Village group and the Neelkanth Mahal, which is further into the hills. As usual we ate breakfast at our hotel’s cafeteria and headed out. It was just a 1km walk to the monuments.

The Village group includes 3 monuments – Jami Masjid and Hoshang Shah’s tomb, both of which are within the same enclosure, and Ashrafi Mahal, which is across the street. The entrance for all 3 monuments is from one ticket, which we bought from a ticket counter close to Jami Masjid’s entrance. So we started our tour from there.

The entry to Jami Masjid is a flight of stairs, which is right on the village chowk. 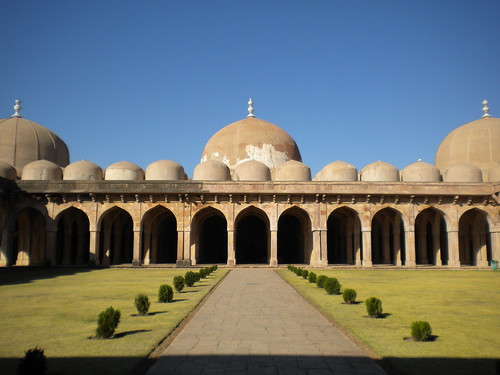 The stairs lead up to a lovely, marble-framed entrance and a huge, circular porch with a high dome. It was a spectacular entrance and gave a great first impression! As we exited the porch from its rear archway, there was a large courtyard before us, with nicely maintained lawns. And facing us was the beautiful, red-stone mosque topped by 3 domes. It was a fantastic sight! The other two sides of the courtyard were enclosed by pillared, arched hallways or at least the left side was; many pillars and part of the ceiling were missing from the right side.

The construction of the mosque was started by Hoshang Shah and he aimed to make it similar to the Omayyad Mosque in Damascus, Syria. But he couldn’t complete it and it was later completed by Mohammed Khalji in 1454. The mosque is quite plain in design, but absolutely stunning. It’s said to be one of the finest and largest examples of Afghan architecture in India. Fantastic! The western wall of the mosque has 17 marble-framed Mehrabs (prayer niche), the central one being larger and wider in depth than the rest. Right beside the central one is a lovely pulpit with a marble dome supported by 4 arched pillars. The height of the mosque is tall enough to support a loft on either side where ladies and visitors could pray privately. These lofts had their own prayer niches as well. Another lovely feature was the stone jalis that covered the windows of the mosque.

A side exit from the mosque led us out to the rear entrance of Hoshung Shah’s tomb. Again, 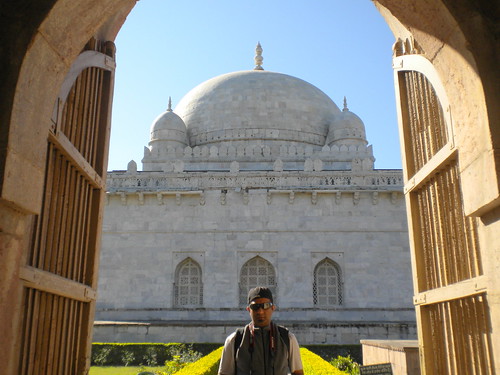 the entrance was thru an arched, marble porch. The actual structure that houses the tomb is made entirely of marble and is said to be India’s oldest marble monument. It’s also said that, in 1659, Shah Jahan sent his architects including Ustad Hamid who was closely associated with the building of the Taj Mahal, to pay their respects to the tomb’s builders. It’s absolutely gorgeous! The structure is surrounded by green lawns with a stone pathway that leads visitors from the entrance to the tomb and around it. We walked around to the front of the structure and were disappointed to see that the door to the tomb was closed and locked with a chain at the bottom. There was no caretaker to check with either. So we kept walking and sat down for a few minutes against its western wall admiring a lovely, stone hallway built by Hoshang Shah’s Hindu architects at the western end of the compound. We are not entirely sure what this building was used for but a sign outside the tomb had mentioned that it is known as the ‘Dharmsala’ alluding to its Hindu architecture. The hallway has arched entrances to an elongated, empty room on one side. It was a beautiful structure in red-stone. Just as we sat staring at this, 2 men, presumably village folk as they were dressed in white shirts and dhotis, walked by. In a few minutes, we heard them speaking from inside the tomb structure. Surprised we walked back to the entrance of the tomb and found that the door was now open; either the men broke open the door or had a key to the lock or the door had not been locked in the first place. We did not ask them; we were just happy to be able to look inside. There were four tombs within the structure, one being considerably larger and more carved than the rest, so we assumed that to be Hoshang Shah’s. The stone jalis on the windows cast subdued light into the tomb and gave it a wonderful feel. We didn’t stay long as I heard many rats squeak from the innards of the structure and I didn’t want to face them.

From here, we crossed the village chowk to get to Asharfi Mahal, which is completely in ruins. 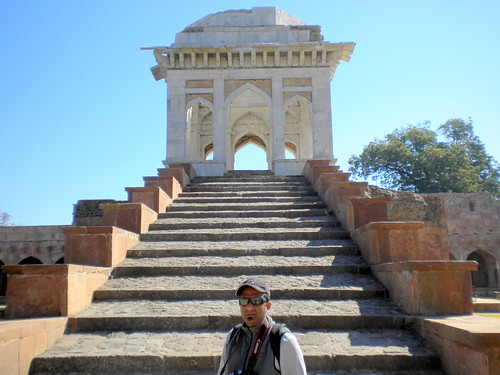 So far, in Madhya Pradesh, we’ve noticed that the ASI has managed to restore most monuments quite beautifully. But Asharfi Mahal is so badly damaged (there’s no roof and hardly any pillars left) that I doubt anything can be done to restore it. All we could do is walk thru the ruins and imagine what it must have looked like back in the day. It was originally built by Mohammed Shah to be used as a madrasa (school for Islamic studies). The walls were covered with marble slabs and small cubicles were built for students to study in. The madrasa was constructed in such a way that its main entrance faced the wonderful mosque, giving the students an inspirational view. However, Mohammed Shah later decided to have his tomb built on the same site and therefore built an extension to it. This is said to have been an overambitious project with a seven-story circular tower of victory. But it all collapsed leaving behind just a shell of a building. The sad thing is that this structure blocked both the usage of the madrasa as well as its fantastic view!

This completed our tour of the Village group of monuments and now the only other monument of interest that we hadn’t seen yet was Neelkanth Mahal. It was about 11am and quite hot. We were in mood to bike out to the Mahal in this heat so we talked to a couple of people in the chowk and one guy said that his car would take us there and back for Rs.100; we happily agreed. But the car was elsewhere and it would take a few minutes for it to get to the chowk. While we waited for it, we suddenly noticed that Asharfi Mahal has a lower level with some arched hallways – we had not visited this part at all. So instead of hanging out on the street, we decided to quickly go and check it out.

As we entered the arched hallways, we realized that there was nothing much to it but some shaded rooms. We turned left towards the hallways at the back and, instead of walking on the stone pathway, we ducked into a narrow, pillared hall that led to there. Almost instantly Madhu was attacked by 3 or 4 bees. I saw him jerk in front of me and also saw a bee land on his camera bag. We immediately turned around and ran out into the courtyard. Thankfully, the bees didn’t follow us there but they had bitten him on his upper, left arm; I could see two red bites . He said that it felt like they were still poking him and that it hurt terribly . I was quite terrified; didn’t know what we could do to alleviate the pain and ensure that no allergic reaction happens. We washed the area with some water and then walked back to the chowk where our car had just arrived. We told the driver about the incident and he assured us that the pain will eventually subside. He also said that the village folk believe that the stung area is relieved of pain if it is rubbed with iron for 7 times. Thinking back at this statement, I should have laughed when he said this. But at that time we were so desperate for help that we immediately agreed to the experiment. He took us to Neelkanth Mahal and stopped in front of one of the many stalls that lined the road. There he told the stall-owner about the bee-sting who in turn brought a very rusted-looking iron pincher and immediately rubbed it over the affected area 7 times. Unbelievably, the pain disappeared almost instantly! The redness of the bites also disappeared ! We felt incredibly grateful to our age-old home-remedies – some can definitely work wonders ! Since then Madhu has had no pain or allergic reaction – thank you, Lord!

Neelkanth Mahal is a palace built during the time of Akbar over an ancient Shiva shrine. 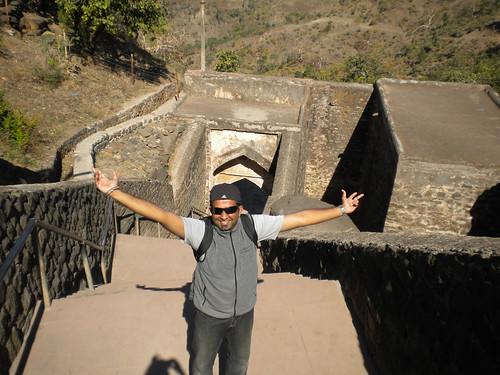 What makes it special is its lovely location! It’s situated right at the end of a cliff overlooking a ravine. During the monsoons this place must look magical! The palace itself, thought is not very special. It’s nice, of course, but if I had biked in the heat, over the not-so-flat terrain, then I would have been very disappointed with the place and wouldn’t have found it to be worth the effort. There are Persian inscriptions on the walls of the palace, which record Akbar’s visits while on his way to the south. The palace continues to be used as a temple with a small Shiva Lingam inside and a couple more in the adjoining rooms. There’s a small, square water tank in the front, from which water flows out to the ravines via a spiral water channel, similar to the ones we saw within the Jahaz Mahal.

The car dropped us back to our hotel around 1pm, which gave us the whole afternoon to relax. Our Mandu visit has been absolutely fantastic! When we visited Orchha we thought that it was far better and had more to offer than Bundi, which is a similarly rural town. But when we got here, we found that Mandu is far more rural and has a lot more to see than any of the other places! We spent 4 nights and 3 days here. For most visitors, though, a ‘2 days 3 nights’ stay should be enough to cover most of the places easily: first day could be spent seeing the Sagar Talao group  and the Rewa Kund group, with an optional ride out to Neelkanth Mahal, and the second at the Village Group and Royal Enclave. Since Madhu and I preferred to take it very easy and relax in the afternoons away from the heat, we took longer and totally enjoyed it .

What a fantastic end to our MP sojourn!