It was really, really hard to wake up this morning, just like it has been over the past few days. Apparently, winter has been much cooler this year than ever before. Chhatresh, our auto-driver, was to pick us up at 9am to take us to Raneh Falls. Madhu and I seriously considered calling it off; after all we hadn’t heard or read much about these waterfalls. But somehow we managed to drag ourselves out. Thank God, we did! If we hadn’t, we would have missed something incredibly special¦

Raneh Falls is 20km south of Khajuraho within the Ken Wildlife Sanctuary’s boundaries. The scenery, en route, was absolutely gorgeous with green fields on either side. At the entrance of the sanctuary, we were charged Rs.20 per head and Rs.40 for a guide to accompany us; he sat in front with Chhatresh. The waterfalls are a further 3km south of the entrance. Here the scenery changed to a dense forest quite like that at Bandhavgarh. We also noticed a dried, rocky, riverbed – the landscape looked gorgeous.

When we reached the Raneh falls, Chhatresh parked in an almost vacant parking lot and the guide, Mr. Yadav, walked us out to a wooden platform. The platform extends out over a rocky cliff and provides views of the waterfalls that are on the cliffs across from the platform. In between the cliffs was a deep canyon where the river Karnavati (or Ken as it is known since the British days) flowed passively. We stopped at the first 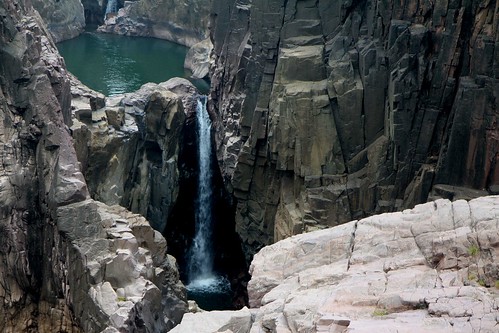 viewpoint from where we could view the 1st waterfall. It wasn’t very impressive but the scenery was beyond imagination! The rocky cliffs were awe-inspiring. Mr. Yadav informed us that there were 5 types of rocks in this riverbed – black basalt, grey dolomite, yellow/red jasper, gold quartz and pink granite. These colors looked absolutely magical in the dull sunlight.

Mr. Yadav realized that we weren’t too impressed with the waterfall.So he whipped out his cell-phone and showed us pictures of it during and after monsoons. He claimed that in monsoons the water level rose up and nearly covered all the cliffs that we could see now. At that time the waterfall was much larger and prettier, and he had pictures to prove this. In 2005, when the rains flooded and caused a lot of damage in Mumbai, the river Karnavati 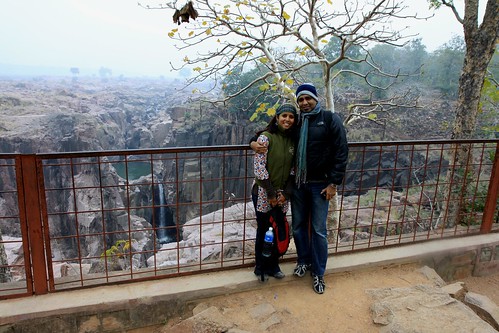 also flooded and caused water to rise about a feet above the platform we were standing on – scary!!

We walked on the wooden platform to the second viewpoint and here we could see the river-water-filled crater of the volcano that originally existed. Diagonally to the right, were 3 more waterfalls. Here the view was even better than before. I commented that the canyon looks like a mini version of the Grand Canyon. Mr. Yadav smiled and said that many foreign tourists have commented the same and also that during the rains, the place looks like a mini version of the Niagara Falls.

This place is so darn beautiful! It deserves to be promoted as a highlight of 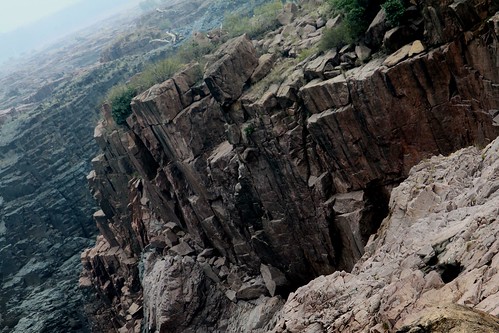 Khajuraho along with the temples. The guide books have mentioned it in passing and the locals, whom we spoke to, barely had anything encouraging to say. In fact, because of this, we were a bit skeptical about making the trip here. We mentioned this to Mr. Yadav and he explained that since the maintenance of the falls does not fall under the tourism dept, it does not get advertised. The forest dept maintains the place well but doesn’t do much to attract visitors. What a shame!

We sat around for a while soaking in the lovely place and then reluctantly left to look for Ghariyals (long-snouted crocodiles) within the Ken Wildlife Sanctuary. The Ghariyals are usually found 6km inside, near a rocky beach where they lay out on the rocks and try to get some sun. Mr. Yadav mentioned that the sanctuary has plenty of Neel Gaay, Sambars and Chittals (spotted deer) and that we may be able to spot them en route. As Chhatresh drove us into the sanctuary, I realized that we were on an auto-rickshaw safari through the Ken Wildlife Sanctuary.

We did spot plenty of wildlife. Before this, we only had far away glimpses of the 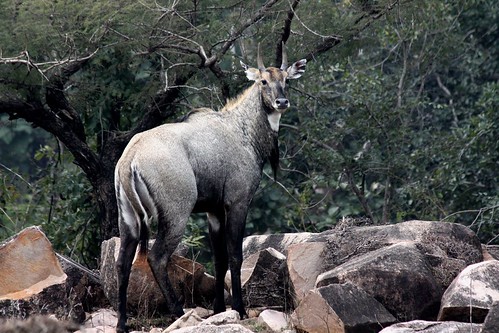 elusive Nilgai. But here, we spotted them right by the road and Madhu was able to get some really good shots. We also saw plenty of cows grazing around. We assumed that they may be cattle from nearby villages but Mr. Yadav later explained that they were actually abandoned by the villagers. Rains haven’t been good over the last few years and the villagers have had a tough time making a living out of their farms. At such times, feeding the cattle becomes extremely difficult. So they’ve had to abandon them. Instead of letting them stray in the villages, they were brought to the jungle so that they could live peacefully with plenty of food around. Our farmers face such adversity – it’s heartbreaking! Fortunately, this year, though late, rains have been better, which accounts for the greenery we saw everywhere.

We got to the point from where the crocodiles can usually be spotted but unfortunately, we didn’t spot any. The day was still cool and the sun hadn’t come out – so the crocs had no reason to let themselves out of the water. Sigh!

The forest dept offers boat rides in the river from this point. But for this, one has to scramble down the rocky cliff, about 200m down, to the base. Mr. Yadav warned that climbing down isn’t as hard as climbing back up. Madhu and I were in no mood for such hard work. Moreover, we don’t really trust the safety standards of such services; especially when they are not very popular and seldom used.

We dropped Mr. Yadav back near the entrance of the sanctuary, on our way back to Khajuraho. He was very warm, helpful and knowledgeable. He has been working as a guide at Raneh Falls since 1999 and seems quite passionate about his job. Without him we wouldn’t have learned so much about the sanctuary. We would definitely like to come back, someday, during or right after the rains, to see the waterfalls in their true majestic form. However, I’m glad we came here in this season too ‘coz the rock cliffs are an amazing sight and must definitely be seen.