The auto made the 46km journey quite slowly and made it to the caves in about 75 minutes – a little longer than we anticipated. Oh well! The caves are set well within the Ranapani Forest, so it cannot be visited on foot – got to have a car, or as in our case, an auto. Near the entrance, we hired a guide (Rs.150) to show us around and entered MP’s third (and our 8th) UNESCO World Heritage Site.

Right at the beginning, the guide explained that these are not caves, which are man-made, 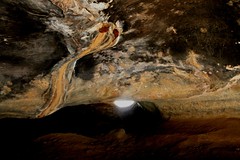 but rock shelters, which are natural. There are about 700 of them in Bhimbetka, of which at least 500 contain some of the world’s oldest prehistoric paintings! The name Bhimbetka is because in Hindu mythology it is believed that Bhim sat/rested on one of these rocks. Presently, at the site, public can tour 15 rock shelters and our guide took us around to each one of them. The paintings were mainly in red and white. And since they were made inside the rock shelters, they have been remarkably well-preserved. These were made over a span of thousands of years so we could make out the different styles as well. The earliest painting, about 12,000 years old (!), is in red and depicts large animals like elephants and ox that existed then. Later paintings showed horses that were introduced into India from the northwest. The earliest painting of horses was done quite crudely in a geometric fashion, which can still be seen today in the Warli style of painting from Maharashtra. Later paintings evolved to show the contours of the animal perfectly and we were amazed at the grace of these. 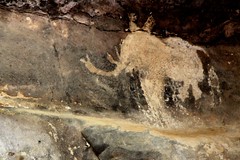 The newer paintings also showed religious images of Lord Shiva and Ganesha proving that as man evolved, he began believing in a higher self. All this was quite amazing and in a sense, overwhelming – it was hard to imagine what human life was like thousands of years ago! These paintings seemed to just add to the mystique! Even the rock shelters, which were carved out of water bodies that existed millions of years ago, looked quite unreal! It was all a fantastic sight!

Since there were just 15 rock shelters to view, the tour ended quickly. On our way out, our guide suggested that we visit the 10th century Bhojeshwar temple at Bhojpur, which lies mid-way between Bhimbetka Rock Shelters and Bhopal. The guidebooks had mentioned this temple but I wasn’t sure if it would be worth visiting. Now since the guide recommended it highly and since it was on the way, we decided to pay it a visit as well. Our auto-driver promptly added Rs.50 to the fare for this extra excursion.

To get to Bhojpur without adding extra kilometers to our trip, we took a narrow, bumpy, village road, a shortcut, which afforded us some fantastic views of endless farms!  When we reached Bhojeshwar temple, we saw the usual chaos that ensues outside every temple in India that is still being used. The road leading up to the temple was lined with stalls selling everything from plastic toys to pooja items. The whole place was terribly crowded and noisy. I didn’t have a good feeling and immediately started regretting our decision to stop here. But I was so wrong!

Built in the 10th century, the Bhojeshwar temple is a huge, square, stone structure that looks like a giant warehouse from the outside. There are absolutely no carvings; just rectangular, 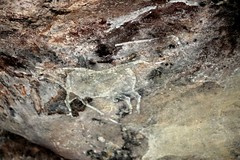 sandstone blocks. But its entrance is framed by a pair of lovely pillars and that itself sets the stage for the sight within. The temple has just one room within and this houses the world’s tallest Shiva Lingam, which is 22ft tall. And what a sight it is! The huge Lingam is placed on an even bigger square, stone base. There was hardly any room for visitors (where were just us; the rest were all devotees) to walk around the idol. The whole structure, including the Lingam looked like it was built for giants and was being visited by us dwarfs!

Bhojeshwar temple is definitely worth stopping by, en route to or from the caves. I’m so glad the guide at Bhimbetka Rock Shelters convinced us to make this stop! He had also mentioned that the State Museum, which we missed yesterday, was truly world class and not to be missed. So after Bhojeshwar, when the auto driver dropped us back near our hotel, we immediately took another one to Shamla Hills. This time we knew where we wanted to go and the auto driver knew about it too, so we got there without any drama. Thank God!

It was past 3pm when we entered the huge, modern complex of the State Museum. It closes at 5:30pm, so we knew we had plenty of time. We were super tired after the day’s excursions so I was a little skeptical about how much attention we would devote to the museum. But it has such a fantastic collection of artifacts that we forgot all about our tiredness and spent more than 2 hours here! Right near the entrance is the best gallery; one filled with masterpieces of stone sculptures from around MP. It felt like the museum had collected the best-preserved sculptures from the ruins of MP and placed them here in this room – it was mind-blowing. Apart from these, the museum has collections of letters and documents showing the role of the MP region during India’s freedom struggle, starting from the 1857 uprising. This was quite interesting! Another interesting gallery was that of artifacts collected by the nawabs and princes of MP. In this was a little, metal statue of a bearded carpet seller. LP had mentioned it, which is why I looked at it closely – and what a masterpiece it is! The carpet being displayed by the carpet seller looks like it’s truly made of cloth, while it’s actually made of metal. Like Madhu says, it’s worth visiting the museum just to look at this tiny figure! Other galleries included collections of textiles, armory, bronze sculptures and paintings. They were all wonderful!

This has been another tiring day in Bhopal but totally worth all the effort! Unfortunately, though, we didn’t find time to visit the mosques in the old city. Tomorrow we plan to head out to Mandu. Staying back in Bhopal for one more day just to see the mosques doesn’t make sense. I guess we’ll just have to leave it for some other time!