We were to leave for Mandu today morning. But when we enquired around we found that there are no direct connections (no surprises there!). Our only option was to get to Indore first and then take a bus to Mandu. MP Tourism’s website allows online booking of their Bhopal-Indore air-conditioned buses, so we got ourselves booked on the 12pm bus out of Bhopal; earlier buses were fully booked. The website stated that it’s a 6-hr ride to Indore.

Since the morning was suddenly open, we decided to use the time to visit Bhopal’s mosques in the older parts of town. LP had mentioned 3 mosques that were worth visiting – Taj ul Masjid, Jami Masjid and Moti Masjid. So after breakfast, we took an auto to the first one.

Built by Bhopal’s third female ruler, Shah Jahan Begum, Taj-Ul-Masjid was still incomplete when she died in 1901. She had set out to create the world’s largest mosque but it never got there. The mosque was 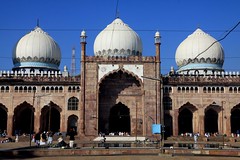 completed in 1971 (not sure by whom) and has since been used for prayers. We walked into the walled compound of the mosque through a side entrance to find a huge courtyard (comparable to the one before Jami Masjid at Fatehpur Sikri) with a water tank in the center. Many children sat under the arched walls of the mosque, studying under the guidance of senior teachers. Men milled around the complex and looked at us curiously. I felt slightly out of place but the stares were never unwelcoming.

The mosque is quite huge with 3 onion-shaped, white domes and 2 pink minarets. The original color of the mosque is probably a deep reddish-pink of sandstone (similar to that of Qutb Minar) but now it has been painted over. Madhu asked a couple of men if we could enter the mosque. They replied that he was free to go with something covering his head. As for me, I would have to cover my entire face. Not wanting to get into all that nor offend anybody by being the only female presence inside the mosque, I asked Madhu to go check it out on his own while I sat outside on the steps. He went in and came out claiming that the mosque had a great feel inside especially since the acoustics are brilliant; the sound of the studying children reverberates throughout the mosque.

Our next stop was Jami Masjid, which was a short auto ride away. This mosque, though, was nothing special. It is architecturally very simple and didn’t interest us too much. Moreover there were older children studying here and we didn’t want to disturb them, so we left quickly.

A few blocks away from here, across a busy street, is the Moti Masjid. Built by Bhopal’s 2nd female ruler in the early 19th century, this mosque is simple yet elegant. We climbed a few 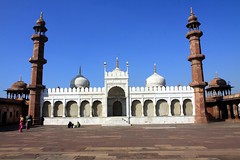 steps to enter its courtyard through an arched, gated entrance. Much smaller in scale than the Taj-Ul-Masjid, this mosque has a marble facade with 11 arched entrances including a larger, central one. Two red minarets frame the mosque beautifully. We sat here awhile, enjoying its serenity.

I’m so glad we got this opportunity to see the mosques. Not that they are a must-see, but it would always nag us that we missed one important part of Bhopal. The old city has a nice charm to it and, though it has cramped streets and stores, the place was quite clean.

Later, we caught the 12pm bus to Indore. The large, AC coach was relatively new and therefore quite clean with plenty of leg-room. It was a very comfortable ride. In between, it stopped at a highway restaurant run by MP Tourism. For the first time in our travel, I was able to use the restroom provided by a highway restaurant; I’m so thankful to MP Tourism! In Indore, we checked into Hotel Kalinga for the night ‘coz it wasn’t possible to find a connection to Mandu late in the evening. We’ll head there tomorrow. Tonight we’ll relax!