As expected, there were no proper connections from Sanchi to Bhopal except for state-run buses and passenger trains that take forever. But what we didn’t expect was that even these options would be taken away from us because of some upcoming election . Apparently, none the buses were plying as they were being used for election runs (Lord knows why). Because of this the trains were completely over-crowded . This is not the first time this has happened to us – twice before we have been stranded because of politicos deciding to take over the transportation system for their own agendas – very frustrating! The hotel guys said that a taxi would cost Rs.1,600, which is ridiculously high for a 50km ride. So we hired our second-favorite mode of transport – auto-rickshaw ! We got a large one, with bench seating at the back, for the ride and it cost us Rs.450.

Again the scenery was absolutely gorgeous! There were green fields, as far as the eye could see, on either side of the road. Thank God for the rains this year! While gazing out at these visuals, 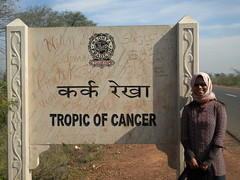 We reached Bhopal around noon and checked into Park Hotel. Bhopal is a fairly large city. It has 2 lakes within the city limits called the Upper Lake and Lower Lake. To the north of these lakes is the old city, which has a predominantly Muslim population. This is mainly because Bhopal was ruled by Islamic rulers, female Islamic rulers (yeah! You go girls!), in the 19th century. To the south of the lakes are the newer parts of the city. We are in Bhopal mainly to explore the prehistoric caves at Bhimbhetka, which are about 46km south. So we weren’t really planning to see anything in Bhopal itself especially because we knew that it didn’t have anything to offer. But since we were here and since Madhu and I couldn’t really leave the city without seeing at least a little bit of it, we decided to head out.

Bhopal has 2 major, if you can call them that , attractions – the mosques and the museums. The guidebooks mentioned that the State Museum is ‘world class’ so we decided to go there first. After lunch at a local 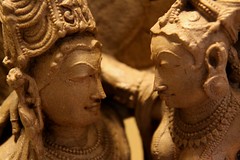 fast-food joint, we tried to get an auto to drive us to the museum. But, to our utter dismay, nobody seemed to know where (or what) it was. This made us doubt if the museum was really as reputed or good as the guidebooks made it out to be . Finally one auto guy claimed to know where it was, so we hopped on. But he took us to some Science Center instead . We were so frustrated by now that we were seriously thinking of turning back to the hotel. But the security guard at the Science Center convinced us that the State Museum is the one called Rashtriya Manav Sangrahalay (RMS). However, in the LP, RMS was listed differently from the State Museum. Assuming that they had it wrong, we asked the same rickshaw to take us to RMS.

We were dropped off near the entrance where there was a ticket booth. We bought tickets and then had to walk uphill for nearly 15 minutes before getting to the building at the top. On the way there were many exhibits of tribal huts set into the forested area that was on either sides of the road. They must have been worth exploring but we were a little too frustrated and irritated to make the effort . Moreover, the sun was beating down on us and we were quite tired. The building at the top had a sign saying ‘Veethi Sankal’; nothing else. We had no idea what those words meant and whether this was a museum or something else. At this point we were ready to scream!

Thankfully, once we entered this structure, things got better. It was a museum and it turned out to be the National Museum of Man, Rashtriya Manav Sangrahalay in Hindi . A helpful staff member informed us that the State Museum is different and is in a new structure built behind the RMS complex. But he convinced us that the National Museum is one of the best and must be seen as well. Since he sounded very passionate about the museum and since we had no energy to go hunting further for the State Museum, we bought tickets for RMS and walked in.

The staff member was right; this is an amazing museum! It starts off with displays explaining the evolution of man from apes, giving details of each evolutionary step. From here it displays information about the prehistoric sites found in India including the one close to Bhopal, Bhimbetka. Then it displayed information, handicrafts and other artifacts from the tribes of India who have maintained their culture 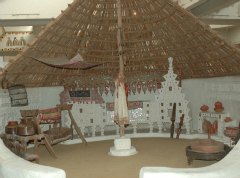 and rituals passed down from ancestors. It was all very fascinating – we were completely absorbed! There were 12 galleries in all. The last one, though, was the best – especially for antique-hunters like us . It displayed bronze artifacts like jewelry boxes, urns, idols, religious lamps, etc. – it was a fantastic collection. For us, this gallery was the highlight of our visit to Bhopal’s National Museum.

We spent nearly 2 hours at the museum and walked out sometime around 5pm. By this time it was too late to see the State Museum, which closes at 5:30pm. So we left it for tomorrow and walked out of RMS’ rear entrance. From here we walked downhill for about 20 minutes before finding a rickshaw to take us back to the hotel. What a tiring day it has been! The hunt for the State museum was mentally exhausting and the tour of the National Museum was both mentally and physically exhausting! Tomorrow we will head out to see the Bhimbhetka caves. But before then, we will definitely get a good night’s rest.