A bike ride through Mandu

Today morning we woke up (relatively) early, ate breakfast at the cafeteria and biked out to see Mandu. The Mughal rulers of Delhi conquered it in the 14th century and later the Afghan, Dilawar Khan, set it up as his own little kingdom. This is when Mandu’s golden age is said to have begun as all the monuments were built then. His son, Hoshang Khan, moved their state’s capital from Dhar to Mandu, adding to its glory. In early 16th century, Baz Bahadur Shah of Gujarat captured Mandu but was eventually defeated by Emperor Akbar 40 years later. Because of this history, Mandu has some of the best Mughal-Afghan architecture of India. The guidebooks have listed 3 groups of monuments as the sights to see. The Village group of monuments, as the name implies, is right by the village chowk and provides a magnificent backdrop to an otherwise sleepy, not-so-unique chowk. The Royal Enclave group of monuments is parallel to the main road and is within walking distance from the chowk. The third group, Rewa Kund, is the furthest. It’s at the southern end of the fort, a good 4.5kms away.  We decided that we would start here. 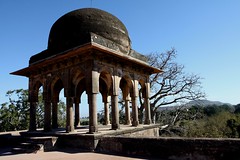 would definitely make it a fantastic experience! Moreover, the guidebooks promised me that the roads are flat allowing a pleasant ride. Liars! There was no hill, I agree, but the road to Rewa Kud group was definitely not flat! I huffed and puffed my way up, at times walking the bike, to the entrance. By the time we got there, my lips were dry and my newly washed hair stuck to my scalp with sweat. I must admit, though, that the surrounding greenery made it totally worth the effort. The place is absolutely gorgeous! We passed a small lake, Sagar Talao, and many marked ruins that had not been mentioned in the book. We made a mental note to stop by them on our way back.

Rewa Kund group is so called because of the Rewa Kund tank, which is at the base of the monuments. Many sadhus were sitting on its steps, bathing or chanting prayers. Some women were performing pujas too. We later learnt that all this activity is because today is Basant Panchami (Festival of Spring). The entrance to the group is right across from the Kund. We parked our bikes here, bought entrance tickets and sat for a few minutes under an adjoining banyan tree to recuperate before setting off towards the first monument – Baz Bahadur’s Palace.

Even though it’s called so, Baz Bahadur’s palace was built by the Afghan ruler, decades 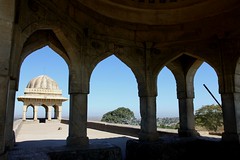 before Baz came into power. It is said that he liked living here because of his romantic liaison with a pretty singer, Rupmati, whom he stationed in the pavilions built on top of a cliff close to the palace. Very simple in design, the palace is said to be a mix of Rajasthani-Afghan styles; we loved its simplicity! After entering through an arched entrance, we came upon a green courtyard from where another arched gateway led to the main living area. Here there was a stone-paved courtyard with a fantastic, square, water tank in the center. Unfortunately, repairs are still ongoing at the palace. A few men were working fastidiously, cutting stones and replacing a stone awning, which seems to have fallen away. Because of the noise from all this work, we didn’t spend too much time here. We walked through the arched hallways that surround the courtyard and quickly climbed to the terrace above. The views from the terrace were simply breathtaking! Two, pillared domes are placed at the palace’s southern end, making them perfect places to find shade from the sun and gaze out at the scenery.

The walk up to Rupmati’s Pavilion from the palace is quite steep. We didn’t bother bringing the bikes ‘coz I knew I would end up walking it. There’s a parking lot near the entrance to the pavilion and from here too there’s a bit of a climb up. Half way, though, we found steep, stone steps that led us from the road up to the pavilion. After more climbing, we finally reached the base of the monument.

Just like the palace, Rupmati’s pavilion is a very simply built living quarters that cannot be 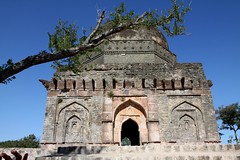 really termed as a palace. L-shaped, arched, stone hallways are topped by a fantastic rectangular terrace, which has a pillared dome at each end. Being at the edge of a cliff, the view out of the southern dome is stunning! Acres of fields stretched out in front of us with sprinkling of small water bodies here and there. It is said that on a clear day, which is not today, a glimpse of the holy Narmada, a good 40kms away, can be seen. Rupmati obviously must have loved her pavilion for that view. This place is supposed to be the most romantic one in Mandu, mainly because of its history. It’s said that Akbar was attracted to Mandu because of the stories of Rupmati’s beauty. When he advanced towards Mandu, instead of facing him, Baz Bahadur fled leaving Rupmati behind (coward!). The proud lady consumed poison and killed herself before Akbar got to her. It’s said that, even today, this love story is a subject of many Malwa (region surrounding Mandu) folk songs.

We spent maximum time here resting on the stone platforms built inside the domes. It was also a good spot to gawk at other tourists. Surprisingly there seemed to be many; probably day-trippers from nearby places like Indore. There was a group of teenage kids who seemed obsessed with the camera and taking pictures of themselves. They seemed least interested in the place. Then there was a group of Gujaratis who were visiting Mandu on their way to Indore. They were a large group and were carrying food. A couple sat on the stone platform of one of the domes and ate their lunch leisurely; a couple of stray dogs watched them intently hoping for a morsel to come their way – poor things! But it was definitely a great place for a picnic. Madhu and I wished we could get some hot chai to sip on ¦

Sometime past noon, biking (and sometimes walking) back from Rewa Kund, the heat started taking its toll on us. Near Sagar Talao, we stopped at a shaded spot where a couple of Nimboo-pani-walas (lime juice 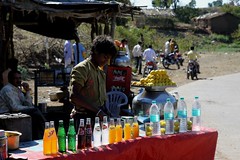 vendors) had set up stalls. Surprisingly they had bottles of mineral water too so we could ask them to make us some Nimboo-pani using the bottled water. These were absolutely refreshing and we drank two glasses each! Only after cooling down did we notice that the spot was marked with a sign that said ‘Echo Point’. We asked the Nimboo-pani-wala what it meant and he said that it meant just that – yell something loudly out and the surrounding cliffs would echo the sound back. We tried it and the echo was distinct and rang out multiple times – quite amazing and loads of fun!

Right by the road, behind the stall was a lovely domed structure that looked unmarked and abandoned. The Nimboo-pani-wala said that it’s worth visiting and that there are other structures behind it that are equally nice. He pointed out to some steps that led down from the road to a dirt track going towards the structure. He said that the track would take us to all the monuments in the area and would eventually lead us out back on to the road. Refreshed from the drink, we set out to towards the monuments.

Later, while researching on the web, we learnt that the group of monuments here are referred to as the Sagar Talao group. The first monument, which is completely visible from the road, is locally known as the Agyat (Unknown) Mahal because nobody knows who it belonged to or for whom it was built. Stone steps led up to a domed pavilion on the terrace of the structure. The lower level is square with multiple arched entrances, giving it a very nice look. The pavilion on top has 4 entrances, one on each side. Inside it’s quite simple, with hardly any carvings or embellishments. The high domed ceiling gives it a very airy feel.

The next structure along the dirt road had a marked sign stating it to be ‘Dai (nurse) ka Mahal’. There was no mention of who this Dai really was. It’s actually not a Mahal but a tomb of the Dai. Perched on a 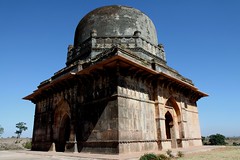 high platform, the stone steps leading up seem to have been newly placed. I wish they had given some kind of ‘distress’ finish to these stones so that they matched the aged, ruined look of the rest of the structure. Right now they just look brand new and quite out of place. Anyway, the tomb above hasn’t been touched yet and is partially in ruins; it had a fantastic ambiance. We sat around here for a while until a Langoor jumped into sight, startling both himself and me!

Right across from Dai’s Mahal is Dai’s Chhoti Behan ka Mahal (Nurse’s younger sister’s palace). Again, there was no mention of who this lady was. But her tomb is similar to her older sibling’s and equally 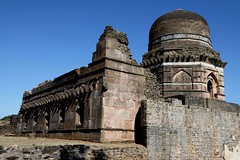 ruined. However, the domed pavilion next to her tomb had a lot more of carvings and looked quite exquisite.

A few yards from the tomb was a large, square enclosure called Caravan Sarai. Apparently, back in the day, this was used by travelers for stay. The walled enclosure houses several rooms with arched, open entrances and we could almost immediately visualize it buzzing with travelers with their wagons parked in the courtyard within the enclosure. Madhu said that they could convert this into a dorm-style, heritage hotel – it would be a great place to stay.

Across from Caravan Sarai is Malik Mugith’s mosque. There was nothing indicating who 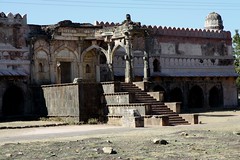 Malik Mugith was, but his mosque is definitely the prettiest structure within the Sagar Talao group. It has a projected, circular porch, which must have been covered by a pillared dome. Today only a few pillars remain. Inside, there is a square, green courtyard walled in by arched hallways. But here again much of the roof and many pillars are missing. The shaded, prayer hall at the opposite end of the entrance has several carved pillars and looks absolutely serene. The partially ruined walls give it a great feel; I hope the govt doesn’t try to fix this!

From here the dirt track led us back out to the main road leading to the village chowk. By now we were so tired that I wasn’t sure if I had the strength to pedal anymore. It was 2:30pm and the sun was still beating down on us. Somehow, we hauled ourselves back. At the village chowk, we walked into a local restaurant and tried to regain composure over lunch and chai. Can’t believe how exhausted we were! So out of shape!

On our way back to the hotel, we returned our bikes as we were in no condition to do any more sight-seeing. Moreover, tomorrow we plan to cover the Village group, which is within walking distance. We had initially planned on staying 3 nights in Mandu but today we’ve decided to stay an additional night. There’s way too much to see here; much more than what’s mentioned in the guidebooks. We want to see it all leisurely; who knows, we may never get to visit Mandu again!

One Response to Mandu on two wheels