Today we checked out of Hotel Sita Manor and hired a taxi to drive us to Orchha, which is about 120km south of Gwalior. The plan was to visit the Jain temples at Sonagiri and the fort at Jhansi en route. We left Gwalior around 9:30am and found that there was quite a bit of fog in the air. Visibility was low, which slowed us down a bit. Our driver, Salim Khan, informed us that almost all trains in the north have been either delayed considerably or cancelled because of the heavy fog. We were glad that we weren’t stuck in any of those trains!

Around 10am, Salim stopped at a roadside tea stall for breakfast. We ate Kachoris and Samosas. The chai was served in little mud pots  and was absolutely yummy! Warmed up with all this food, we slept thru the 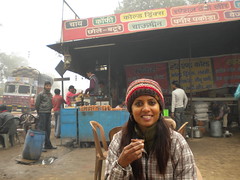 rest of the journey till Salim pulled into the small village of Sonagiri. Here we removed our shoes and socks at the main entrance of the temple complex and walked barefoot up marble steps built into the hillside.

Sonagiri’s Digamber Jain temple complex houses about 108 temples. Out of these 77 are 16th century ones while the rest the were added slowly over time. As we climbed the steps, we passed many small, white-washed temples on either side. There weren’t many other visitors so we had the place pretty much to ourselves. Because of the heavy fog that still hung in the air, it was super cold but 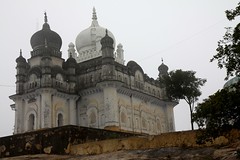 it also gave the temple complex a very eerie, haunted look – we loved it!  We visited the main, large temple at the top of the hill, took pictures and hung out for a while. On our way down, we saw a bunch of peacocks; many more than I’d ever seen before. A couple of them sat atop trees while a few strutted around in the bushes – it was absolutely beautiful to watch. The scene reminded me of paintings of Lord Krishna that showed him in gardens surrounded by peacocks atop trees .

From Sonagiri we continued to Jhansi, which was about 35km south. On the way we passed a town called Datia. The guide books had mentioned that this town has many palaces and temples, which are in ruins. From the highway, through the fog, we saw the outline of a massive palace; it’s sad that these are yet to be salvaged and preserved by the govt. When we reached Jhansi it was almost 1:30pm. Salim took us directly to the Rani Jhansi’s fort. We didn’t have many expectations from the place because there wasn’t much written about it. And we soon found that there’s not much to write about it either! The fort is much smaller in scale than the ones we’ve seen so far. It’s surprisingly well-maintained, though. There are a couple of neat, grassy lawns within. We walked around the periphery of the fort and were able to cover it 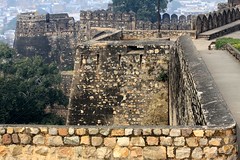 completely within a few minutes. There wasn’t much to explore nor was there anything architecturally special. I guess the fort is special because of Rani Laxmibai and the stories associated with her and the fort.

Madhu’s friend Soumya told us to stop at Narayan Chat Bhandar if we ever passed by Jhansi. Not ones to ever miss out on good food, we headed out in search of it as soon as we left the fort . To our surprise it turned out to be a popular eatery and people on the streets were able point out its exact location to us. The eatery was either recently renovated or newly built – it looked clean and neat. Soumya had suggested that we try Aloo Tikkis and something called Dal ka Chilla. Both were absolutely yummy!  Dal ka chilla was a kind of Dosa made of Moong Dal and filled with grated paneer and onions and other chaat spices – fantastic mixture! We also tried Gol Gappas and a Papdi Chaat – these were just about okay.

Salim finally dropped us off at Orchha sometime around 3:30pm. We checked into our hotel and relaxed for a while. Madhu promptly fell asleep. I prodded him awake a couple of hours later and then 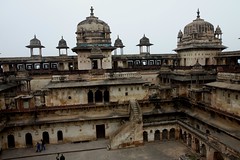 we headed out to explore the town. As we stepped out and walked towards the main chowk, we realized that Orchha is nothing more than a village. We had read in the guidebooks that, just like Bundi, it is also a relatively new destination on the tourist circuit. Because of this, the village didn’t feel very touristy and had a very nice charm to it. We had tea and pakoras at a small restaurant and then walked to Orchha’s main attraction, the palaces, hoping to catch the evening’s Sound & Light show. But the heavy fog played spoilsport – it was too foggy for the lights to have any effect, so the 7:45pm show was cancelled . We then walked back out to the market and spent the rest of the evening gawking at the antique stores and generally enjoying the rural, laid-back atmosphere.

Tomorrow we hope to start early and cover as many of the main sights of Orchha as possible. Most tourists visit Orchha during the day and then head directly to Khajuraho (about 200kms away). But I doubt we’ll be able to see everything in just a single day. For one, Madhu and I tend to take our own sweet time and like to enjoy each place leisurely. Moreover, we already like Orchha’s laid back charm – I’m sure we’ll hang out here for a couple of days at least.