Gwalior – Traveling through the Heartlands of India

After sampling a bit of Madhya Pradesh at Bandhavgarh, Madhu and I were suddenly keen on seeing the rest of the state. MP, which is in the heart of India, has plenty to offer – from forested areas like Bandhavgarh and Kanha to culturally rich towns like Gwalior, Khajuraho and Mandu. So, yesterday, Jan 6th, we boarded Kerala Express (pure coincidence, trust me! ) from New Delhi railway station to Gwalior, closest MP city from Delhi.

Due to heavy fog conditions, all trains in the north were running late and ours was no exception; the 4.5 hrs journey took almost 6.5 hrs! We alighted at Gwalior station around 6pm and immediately hunted around for a hotel. We zeroed in on Hotel Sita Manor, which is just about a couple of kilometers from the station and settled in for the evening.

Gwalior’s biggest attraction is it’s hill-fort and we headed there today morning. The auto-rickshaw dropped u 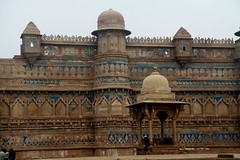 s off at the north-eastern entrance of the fort, which is called the Gwalior Gate. Just inside the entrance, to the right, is Gujari Mahal, built for Raja Man Singh’s ninth wife, Mrignayani. Since she was not a Rajputhi woman like the other eight queens, he had to build her a separate palace. The name Gujari is derived from the caste, Gujar, that Mrignayani belonged to. Today it houses a small museum. We got there around 9:45am and found that the museum opens only at 10am. We were prepared to wait but the security guard seemed reluctant to let us wait. He kept suggesting that we tour the rest of the fort and come back to the museum later. He also mentioned that there was no electricity until 11am so it was best to visit the museum after then. Since none of the museum officials had arrived yet, we got a feeling that the museum would not open on time and this is what the guard was warning us against. So we left knowing that we would probably not get a chance to return to it (we were planning to exit the fort from the western entrance). 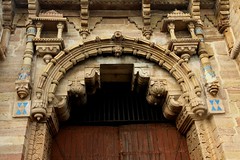 ul views of the fort’s facade and we were totally looking forward to this. However, even though it was past 9am, there was heavy fog and we realized that our pictures are not going to be great. The walk up to the fort is via a steep, stone path and we enjoyed it thoroughly. It wasn’t too strenuous and it afforded great views of the Man Mandir Palace, in spite of the fog.

We entered Gwalior Fort through an ornate entrance called Hathi Pul (Elephant Gate). Inside we bought tickets that were valid for entrance into all the sights within the fort. Right across the ticket counter is the fabulous Man Mandir Palace and we decided to visit this first. The palace was built in the 15th century by Raja Man Singh for his eight queens. It is also called Chit Mandir (Painted Palace) because of the turquoise, yellow and green tiles that once adorned the facade of the palace. Today only a few of these tiles remain but they still look beautiful and give us a glimpse of the palace’s original glory. We hired a guide for Rs.50 and he showed us around the interiors of the palace. The highlights were the Diwan-i-Aam and Diwan-i-Khas both of which had inner, open courtyards, surrounded by carved and pillared halls. The guide then took us to the basement where no sunlight reaches. He showed us around with the help of a torch. One of the rooms, called Phansighar (Hanging room), was where Aurangzeb hung his brother, Murad, to death – I got the shivers down here. Another room was the Kesar Kund where the queens bathed in a small kund (tank) built into the earth. When Raja Man Singh was defeated by the Mughals, the water was drained from the tank and a pyre was built for the queens to commit Jauhar (Sati) . The basement rooms were later used by the Mughals and the British as prisons. It was all quite depressing.

Before leaving us, our guide mentioned that there were several palaces and temples to the north of Man Mandir Palace that were built by and for Raja Man Singh’s children. This area, set within a gated compound, was not mentioned in LP so we were a little hesitant to check it out. But since we had the time, we decided to explore it anyways. And I’m so glad we did! The place is hauntingly beautiful. There are several structures here, which are in absolute ruins with a lot of overgrown vegetation surrounding them. With the heavy fog rolling in, the place had a very strange feel to it. We loved wandering thru all of this. I hope the govt cleans up the area someday soon and maintains it just like the rest of the fort.

Diagonally across the Man Mandir Palace, is a museum by the Archaelogical Society of India. It’s a sad little museum with a few sculptures from the surrounding regions. We spent a few minutes here and then walked south towards the center of the fort. Here we visited a Gurudwara called 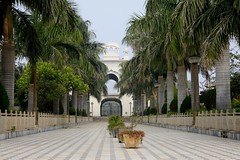 Gurudwara Datta Bandi Chhod. Legend goes that Sikhism’s sixth guru, Guru Har Gobind Singh, was imprisoned here at the Gwalior Fort. When Emperor Jehangir sought to release the Guru, he insisted on the release of 52 kings who were also imprisoned at the fort. The Emperor agreed to release all those kings who could hold on to the Guru’s cloak. The Guru cleverly had 52 tails added to his cloak and therefore, was able to obtain the release of all the kings. The Gurudwara has been built in memory of this particular incident. Interesting!

The Gurudwara is beautifully maintained and looks pristine in white marble. This is the first Sikh temple we’ve visited in our travels so this visit was special. A long, rectangular garden leads up to the temple from the main entrance. We removed our shoes and deposited them at a shoe stand outside the temple premises. We were then instructed to wash our hands at basins setup in front of the shoe stand. A short flight of stairs leads up to the temple. Before climbing the stairs, we had to wade thru a shallow (less than ankle-deep) pool of water, which ensured that our feet were also clean before entering the Gurudwara. Inside, it was very quiet and peaceful.We offered our prayers, ate the yummy prasad offered to us by a Sevadaar and walked around the complex enjoying it’s ambiance. It was a lovely experience!

Our next stop was a temple complex called the Saas-Bahu Mandir, which were to the west of the gurudwara. The complex consists of two temples, one bigger than the other. Built in the 11th century, 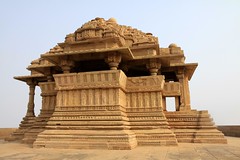 both are absolutely beautiful and have been well-maintained by the govt. Today no idols exist within the temples, so we were able to enter them and walk around without having to remove our shoes.  From here we walked further south to another, beautiful temple called Teli ka Mandir. This was also built in the 11th century and is considered to be the oldest and tallest temple within the fort. Architecturally the temple is a stunning mix of north-indian and south-indian styles, which makes it look very different from the ones we’ve seen so far in North India. This was originally a Vishnu temple but today there’s nothing inside.

We exited the fort thru its western gate called Urvai Gate. By this time it was past 2:30pm and we were really tired. We had been on our feet since 9am. Thankfully, the weather was quite pleasant and that had helped a great deal. As we walked out of Urvai Gate, we realized that the path leading down to the base of the hill was quite steep. We were very glad that we had walked up the less strenuous and more scenic north eastern entrance, instead of this one. On our way down the western ramp, we saw many sculptures of Jain Tirthankars cut into the cliffs facing the ramp. They were eerie and beautiful!

At the base of the hill, we caught an auto-rickshaw ride to Gwalior’s other attraction, the Jai Vilas Palace. This is situated in the center of town and was just a few minutes away. When we got 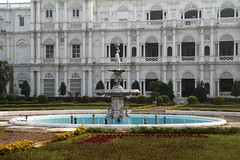 there, I was amazed and surprised by it’s scale and grandeur. It looked quite out-of-place in a small town like Gwalior; it would have probably looked better in New Delhi or in Europe. There is no doubt that the Scindias liked to live in style. For Rs.30 per head we were able to tour a portion of the palace and small museum within.

The museum is not very impressive. There are some stuffed animal skins of animals hunted down by the Maharajas (heartbreaking!) alongwith photographs and paintings of the family. The most striking features 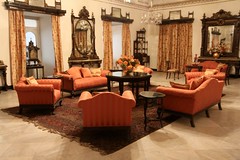 of the palace are in the living quarters upstairs. Some of the rooms, open for visit, are simply stunning in decor, while others are quite gaudy and flashy. A large hall displays the photographs and events from the life of Madhavrao Scindia (1945-2001) who was involved in Indian politics as well. He was a very well-known figure and I remember him mostly as the BCCI president. Today his son, Jyotiraditya, and grandson, Maharyaman, carry on the lineage of the family. Apart from this hall, I loved a room that was furnished completely in dark ebony wood. The carvings on the furniture here is absolutely breathtaking and truly belonged to a Maharaja’s home! In another wing of the palace are two huge banquet halls, for which the palace is most renowned. The one on the lower floor is famous for a rail track that was built on top of the central banquet table to carry food items to the guests seated around it. The banquet hall above is famous for the gold-adorned ceiling and two huge chandeliers that must weigh tons.

We spent about an hour at the palace by the end of which we were truly exhausted. It had been a long, tiring day with a lot to take in. Both the Gwalior Fort and the Jai Vilas Palace are definitely worth a visit and can easily be covered in a day. It’s a small town so getting around in auto-rickshaws is quite easy and doesn’t cost much. Apart from these two, Gwalior is also famous for the Tomb of Tansen, but Madhu and I are not too interested in visiting it. So tomorrow we plan to head out towards Orchha, our next stop in MP.