Madhya Pradesh doesn’t seem very well connected by bus or trains. The state-run buses exist but they look so beaten up that Madhu and I haven’t had the guts to try them yet. As for trains, there aren’t many. One would imagine that a place as famed as Khajuraho would have tons of connections from and to anywhere. Well, that wasn’t so! There were no private buses running between Orchha and Khajuraho. There was just one train, a passenger train at that, which left Orchha at 7:15am in the morning – a little too early for a winter morning. So we eventually hired a private taxi to drive us to Khajuraho – a 180km, 4-hr, Rs.1,300 ride.

I’ve read and heard a lot about the beauty of Khajuraho’s temples; after all it is a UNESCO World Heritage site. It’s a dream-come-true to be here! From the Bundela 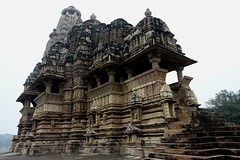 kingdom’s 16th century capital of Orchha, we arrived at this 10th century capital of the Chandela kingdom at around 1pm. We checked into Hotel Zen and lazed for a while. We had planned on resting the afternoon away but we soon itched to get out and see the famed temples.

The temples are spread around Khajuraho in 3 major groups based on their location. The western group is the largest and the best, and it is this cluster that has been listed as a world heritage site. The other two groups are to the east and south of town. We decided to explore these today and leave the western group for tomorrow. Since the temples in the eastern and southern group are spread out quite a bit, we hired an auto-rickshaw to take us around.

One problem with cold weather is that drying clothes takes much longer. In Orchha, it took them 2 days to get our laundry done. In Khajuraho, our hotel guys are not able to give us fresh towels 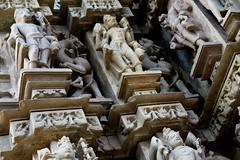 in the morning because their laundry is not getting done on time either. So we were very happy to hear that there is one laundry shop that owns a dryer machine. It turned out to be owned by a family member of our auto-driver, Mr. Chhatresh. We dropped off our laundry there before heading out to the temples. In this day and age, why don’t hotels own dryers too? Strange!

Back to the temples – Chhatresh took us to the farthest temple first, Chhaturbhuj. This temple is 3km south of Khajuraho and is famed for the 11ft high idol of Vishnu within. Built in the 12th century, it was one of the last temples built in Khajuraho during the Chandela period. The first thing we noticed was how well the temple and it surroundings were maintained. The temple was enclosed within a gated compound that was landscaped beautifully. In Gujarat, the temples, including the fantastic Modhera Sun Temple, were infested with bats and/or pigeons, and were quite dirty. But here, all the openings in the temple were protected with mesh windows and doors, thus keeping the birds away. The temple was absolutely spotless and it was a pleasure visiting it. The Vishnu idol within was spectacular as well.  There weren’t many carvings, though. From here, we were taken to the other southern temple, Dhuladeo. It was similarly well maintained. It was built after the Chhaturbhuj temple and is the last temple of Khajuraho. It is said to have the best sculptures of Shalabhanjikas (tree goddess/woman posing with a tree, a sign of fertility). Dedicated to Lord Shiva, the inner sanctum enshrines a beautiful Shiva Lingam. The outer walls of the temple had beautiful sculptures and a couple of those that Khajuraho is most famous for – the erotic ones.

The next stop was the cluster of 3 Jain temples that fall within the eastern group. All 3 temples are enclosed within a large compound. Here the main temple near the entrance, Shantinath temple, was built 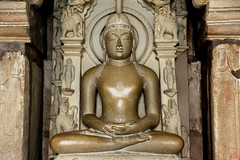 just about a hundred years ago using stones found in the ruins of other Jain temples in the area. It is the only Jain temple that is still being used in Khajuraho. Inside is a fantastic 14ft high idol of Lord Adinath. It is well polished and shines with a glossy luster even today. The other 2 temples within the compound, Parsvanath and Adinath, were built in the 10th and 11th century, respectively. The Parsvanath temple has been beautifully preserved and is whole, with beautifully carved sculptures. There is a lovely, black idol of a seated Lord Parsvanath with the hood of a serpent above his head. The door to the inner sanctum is flanked by sculptures of Ganga and Yamuna as well as Dwarpals (door guards) – it was all very fascinating. On the other hand, only the inner sanctum exists of the Adinath temple. Inside, there are hardly any carvings and it is quite simple. However, outside the sculptures are fantastic.

Up until Khajuraho, we’ve never noticed any sculptures to have any expressions. But here, not only do the sculptures look like they are alive in motion, but also have beautiful expressions – it’s unbelievable! The guide books brought one particular sculpture to our attention – it depicts a woman holding a letter in one hand. The letter is clearly visible and the grief caused by the message is vividly expressed in her face and the other hand that clutches her heart – magical!

Later Chhatresh drove us to Vamana temple, which falls within the eastern group. As the name suggests, it is dedicated to the Vamana avatar of Lord Vishnu. This 11th century temple is built on a high 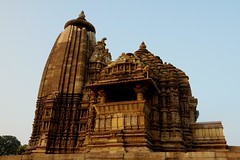 platform and is quite gorgeous in structure. Inside the inner sanctum is a beautiful idol of Vamana. There are images of Lord Vishnu’s other avatars, Varaha and Narasimha, within the sanctum as well. Our last stop within the eastern group, was at the Javari temple, which is just about 200m from the Vamana temple. It’s a smaller temple in proportion but just as beautiful. It is also dated to be built around the same time as the Vamana temple. The guide books mentioned that the sculptures in this temple, in terms of style and presentation, resemble the ones in Gujarat’s temple. Madhu and I, of course, couldn’t make this out. Nevertheless, the sculptures were all extraordinarily beautiful and that was enough to keep us staring.

All temples in Khajuraho open at dawn and close after sunset. Since it was 5pm and close to sunset, Chhatresh decided to call it a day. On the way back, he took us to a Shiva temple called the Matangeshwar Mandir, which is the only Hindu temple that is being used in Khajuraho. It’s a relatively simple temple with hardly any sculptures or carvings. But the Shiva Lingam inside is huge and quite grand. When we got there, a couple was being married on the temple’s high platform. I tried to get a closer look and found the groom chatting on his cell phone while the bride sat demurely by his side and the pujari continued with the marriage rituals – it was hilarious!

We saw 7 temples in total today and there are still more to see tomorrow. I doubt Khajuraho’s temples can be seen entirely in a single day. It may be possible time-wise but it’s easy to get too overwhelmed (and bored?) with all the architecture. I’m glad we are spacing out our visits. Tomorrow morning, we may go to Raneh Waterfalls, which are about 20km south of Khajuraho. It may be nice, even necessary, to see something different before seeing more temples.