For some strange reason, we had no expectations at all from Madhya Pradesh. It was just one of the states that was on our list. But our very first MP visit to Bandhavgarh National Park created a lasting impression. We loved the greenery and the mild-mannered people. And when we checked our guidebooks and notes, we realized that the state housed 3 of India’s World Heritage sites, including the famed Khajuraho temples. So after the national park visit, we immediately set off to tour the rest of the state.

MP has 3 well-known national parks – Panna, Kanha and Bandhavgarh. Conservation efforts haven’t gone well in Panna, leading to a massive decline in tiger population. So we skipped it. Kanha was on our list, but 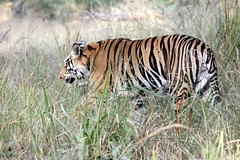 when we were in the area, it was raining and very cold with heavy fog. In such conditions, it’s very difficult to spot any wildlife, especially in a large park like Kanha. So we had to skip it as well. Hopefully, we’ll get to visit it someday in the future.

We spent a total of 21 days in Madhya Pradesh, starting at Gwalior in the north and finishing with Mandu in the south-west. Here’s what we loved most about the state:

The only negative I can think of, is transportation. One would imagine that top tourist towns like Khajuraho, Bhopal, Indore, Mandu would have tons of transport options between them. But that’s not how it is. The main problem seems to be that the roadways connecting these towns are not fully developed yet. So hardly any (private) buses ply between them. Trains don’t have the best connections either. I guess this is one state where having our own car would have made traveling a little more comfortable.

Our MP route and related blogs: