We woke up early in order to go see Orchha’s birds that Shyamlal promised would show up for feeding at the cenotaphs. On a normal day, waking up at 7:30am wouldn’t be termed as ‘waking up early’ but on an unusually cold, winter morning, trust me, it was a little too early for us . However, we managed to get out of our hotel room on time and even found time for some chai and piping hot samosas from a roadside stall – the best breakfast ever !

In our eagerness, we got to the cenotaphs even before Shyamlal. He arrived 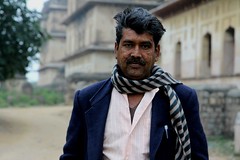 a few minutes after 9am on a cute, pink Scooty , lugging a sack filled with grains for the birds. He apologized for being late saying that he swung by a grocery store to stock up on the grains. And since he cannot carry the sack on his bicycle, which he rides to work everyday, he borrowed his daughter’s Scooty instead . He immediately filled a small tray with grains, walked out to the center of the cenotaphs and spread them on the ground. He warned us to keep our distance so as not to scare the birds away. He also said that since today was an exceptionally cold day, there may not be as many birds. We waited patiently for a while and slowly one by one the birds flew in¦

At one point, I counted and found that there were at least a hundred birds, majority of them being parrots, pecking on the grains in the compound – it was an amazing sight! Madhu had a blast with his 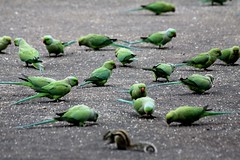 camera while I couldn’t take my eyes off them. We noticed that a few crows had joined the group and were actually scaring the rest of the birds away. Shyamlal immediately tried to shoo them away. Apparently, crows feast on doves and use these feeding grounds as an easy place to spot a prey. In spite of this, the parrots and doves kept returning for their morning breakfast. We stood around for nearly an hour watching all this – time had flown by quickly!

Later as we left, we chatted a little while longer with Shyamlal. We found out that since he cannot really speak any English, he is unable to request visitors for donations to feed the birds. Madhu immediately offered to put down a request in writing in English for him. Shyamlal was super-happy with this idea and gave Madhu a little notebook in which he stores important contact info. Madhu wrote out the request in it and told Shyamlal that he should present this to every English-speaking tourist that visits the cenotaph. Shyamlal comes across as a very nice person who does his job sincerely; we are quite confident that visitors will definitely contribute.

Yesterday when we visited the palaces, we missed visiting the museum Saaket that’s just outside the palace complex. So today we went back there. After crossing the bridge, instead of entering the palace complex, we walked up a pathway that went to the right of the palaces. The museum was a small one and did not charge any entry fee. It displayed folk paintings from different states of the country. They were mostly on cloth using vegetable colors. We liked them all but we especially loved the Kalamkari style of paintings from Andhra Pradesh and the Patta style from Orissa – they were worth buying and displaying at home. The museum was managed by a young chap who led us through each of the galleries and gave a brief explanation of them as well. We signed the museum’s guest book before leaving – it is definitely worth visiting!

From Saaket, we saw that the path continued around the palace complex and there were 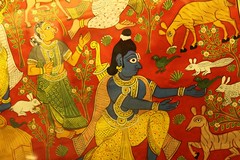 more ruins strewn along it. So even though there were no marked signs, we walked up the path to take a closer look at the ruins. Not only was the walk magical (the weather was perfect; overcast and cool) but the ruins were spectacular too. Luckily most of them had a sign posted outside, giving a brief description of what the structure originally was. We passed ruins of camel and horse stables, a couple of homes and a hammam. We eventually got to the 3rd palace that we had missed yesterday – Rai Praveen Mahal. Today, though, the palace gates were unlocked and we were able to walk in. The palace was built by Maharaja Veer Deo’s brother for the court danseuse, Rai Praveen. It’s a much smaller palace and is right behind the Raja palace complex. It has a large, though completely ruined, garden in the front.

Since it was time for lunch, we ate at our usual restaurant in the market. And we had our usual friends for company – stray dogs ! The restaurant’s seating is on the pavement and therefore the dogs have easy access to all the patrons there. They come and sit by the tables and stare earnestly at us, waiting patiently for a morsel to be thrown their way. Foreign tourists at the restaurant tend to feed these dogs so they are used to the routine. These dogs are super-cute and super-friendly. In our 3 days at Orchha, we ate almost all our meals here and the dogs never once got aggressive. They can be a little annoying by being at our side all the time , but apart from that I loved having them around . After our meal, we walked across to a stall, bought a pack of Parle G biscuits and fed them to the dogs. They accepted each biscuit from my hands without any aggression. In fact, even when 4 or 5 dogs surrounded us, they didn’t fight amongst themselves for the biscuits; they just waited for me to turn around to them and offer them one; such sweethearts! Later we bought some bananas and fed some of the stray cows in Orchha as well – it was fantastic!

From the market, we walked west, past our hotel to Laxmi Narayan temple – our last stop in Orchha. It’s perched atop a small hill and almost looks like a cathedral in scale and size. Viewed from afar, the 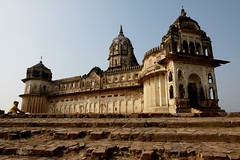 temple looks to be triangular in shape, which is never done in Hindu architecture. The temple is actually quadrangular; it’s just the way it’s positioned on the hill that makes it look otherwise. Inside, it has lovely paintings on the ceilings and walls. However, the ones on the walls have been defaced and written/scratched over; it’s quite sad. In the center of the quadrangle is the inner sanctum of the temple. Unfortunately, the idols that were once within the temple have been stolen and now it’s just a vacant space. We could climb up a level, from where the views were quite nice.

Our Orchha visit has been magical! The town deserves all the attention it is getting and much more. In fact, the state govt should definitely do something to preserve and maintain the monuments better. They are some of the finest we’ve seen but desperately need some TLC. Apart from the ruins, the people of Orchha won our hearts too. They’ve all been warm and quite friendly. We are really loving Madhya Pradesh now; can’t wait to get to Khajuraho tomorrow!

2 Responses to Orchha : Cenotaphs, a Museum and a Temple