Yesterday we had visited Mandu’s Rewa Kund group and Sagar Talao group of monuments. Today, we decided to check out the Royal Enclave group, which is within walking distance (less than 2kms) of our hotel. This group is the only one that’s enclosed within a fence and therefore, easier to explore. It’s also reputed to be the finest set of monuments in Mandu.

We got to the group’s entrance around 9:30am. Right outside the fenced area were several 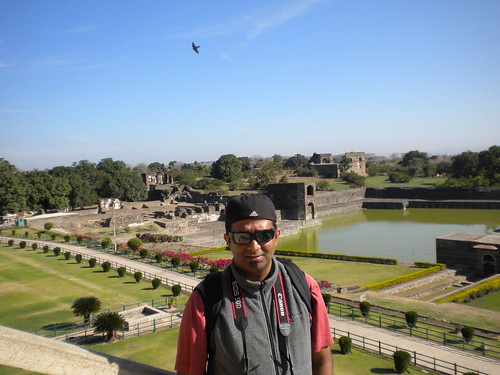 food stalls – there was none of this near the Rewa Kund group. When we entered the enclave, we were probably amongst the first few visitors; there was hardly anybody around. And right as we walked in, we were impressed  with how well the site was maintained. Green areas with flower beds spread out on either side of the road. Of course, the fantastic Jahaz Mahal (Ship Palace) and the Kapur Talao (man-made water body) added to the beauty of the place. But before heading to the palace, we took a right towards Archaeological Survey of India’s museum, which is housed inside Taveli Haveli, formerly used as the royal stables. The museum is quite small with just one gallery displaying some sculptures found during excavations in the Mandu area. Since, for some reason, I’m quite enchanted with the Dashavataram theme, a sculpture portraying Vishnu in the Ananda Shayanam pose with carvings of all his 10 avatars above him, fascinated me the most!

Built in the late 15th century by the 5th sultan of Malwa,

Jahaz Mahal is so called because, unlike other palaces, it is built on a narrow strip of land between 2 water bodies – the Kapur Talao, which it faces, and the Munja Talao, which is behind. During monsoon, when the lakes are full, it gives the impression of an anchored ship. The most interesting thing about the palace is that it was used as a ‘pleasure’ palace; it was housed and staffed completely by the Sultan’s harem of 15,000 women who also served as his bodyguards! Unbelievable stuff!

The lower level of the palace is the living quarters, which has arched hallways and a projected, arched entrance in the center. The terrace has domed, pillared pavilions and the best of all: a terrace pool! This pool and another one on the lower level are probably the best features of the palace. They are fed by water channels, which pump water from the adjoining lakes. These water channels have intricate spiral designs, adding to the beauty of the setting. It gives opulence to an otherwise simple architecture. We could just imagine the Sultan relaxing in the pool surrounded by thousands of women! Lord!

Right next to Jahaz Mahal is the exquisite, T-shaped, Hindola Mahal (Swinging Palace). 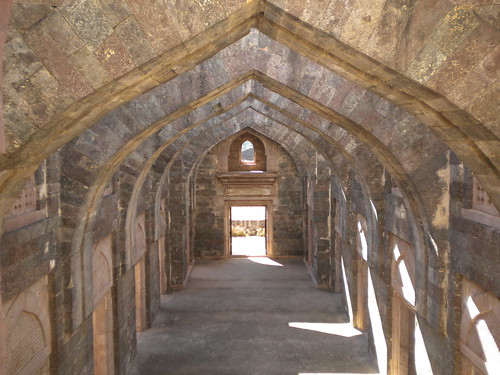 Its massive, inward sloping walls are said to give an impression that the building is swaying, hence the name. It was built in the late 15th century and used as an assembly hall. The hall is huge and reminded me of the colossal European churches that had similar arched entrances, ceilings and windows. Much simpler in design than the Jahaz Mahal, I think Hindola Mahal looks far more grand. I loved the pink sandstones and the dark hallways within.

As we exited Hindola Mahal, we stumbled on to some ruins. These turned out to be the royal palaces where the Sultans actually lived. It is fronted by a well, Champa Baodi, and a Hammam (Turkish bath) to the right. The open well is topped by a stone fence for safety. It’s so called because its water supposedly smelt as sweet as the Champak flower; not anymore, though. It’s also said that the well is connected to a series of subterranean rooms, which are cooled by water that flows in from the well. The royal family, and possibly the harem women, spent hot summer days here – charming! Nothing much remains of the palaces except for some pillared hallways. The Turkish bath, though, is better preserved and is quite pretty. Its rooms have domed ceilings perforated by stars and octagonal shapes that bring in light – loved the effect of this on the walls and floors of the hammam.

The last monument we visited within the Royal Enclave was a mosque built by Dilawar Khan, 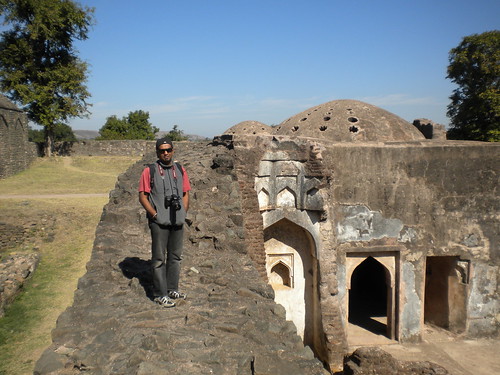 the Afghan, in 1405. It’s the earliest Muslim monument in Mandu and has a mix of Hindu-Afghan architecture. Strangely, there was no direct access to the mosque from the road within the Enclave. We had to enter it through a side entrance that opened into the forecourt of the Hindola Mahal. There is a large central courtyard with a dry water tank in the center. The mosque, itself, is pretty much in ruins today. The tourism dept hasn’t put up any sign or literature regarding it, either. We walked around the complex loving the small, shaded hallways that must have been perfect for praying.

By the time we finished touring the mosque, it was past 2pm and we were super tired. I guess, the heat wore us down. But we were done with the Royal Enclave and since we are going to stay another day there was no hurry to do any more sight-seeing; we were done for the day!

Right now we are in our hotel rooms, watching TV and updating our blogs. I’m so glad that we bought a wireless internet card from Gurgaon. Now we can surf the web from the comforts of our room instead of sitting in dark, cramped cyber cafes. Moreover, remote places like Mandu don’t have proper cyber cafes either.

Tomorrow will be our last day in Mandu. We’ve booked train tickets from Indore to Bombay for Saturday, the 23rd. From here we’ll probably hire a cab to Indore. No way will we make the mistake of boarding the local private buses again.

4 Responses to Palaces and more in Mandu

Leave a Reply to prato Click here to cancel reply.