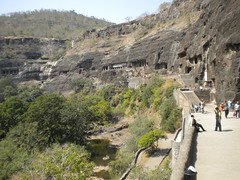 The Ajanta Caves are a richly decorated network of caves located in northern Maharashtra that have become icons of early Buddhist religious art.

Having had a considerable influence on Indian art as a whole, the early Indian wall paintings in the caves have stood the test of time. The intricate architectural carvings are rare and are particularly spectacular and a visit to this area will be a highlight of any trip to India.

The caves were carved by hand into volcanic rock with a hammer and chisel and date back to around 200 BC. A second group of caves were then added in the fifth 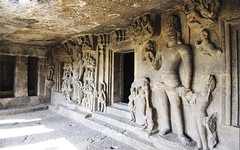 and sixth centuries during the Gupta and post-Gupta periods. In total there are 29 caves awaiting exploration.

Once a destination for Buddhist scholars and followers, the caves were abandoned in 650 AD when the nearby (200 km) Ellora Caves became the preferred choice among the Buddhist community for academic and religious purposes. At the height of their use, five of the caves were used as temples and 24 were monasteries which were frequented by monks and artists. 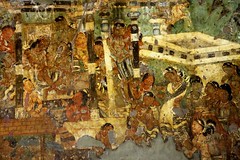 Over time, the caves were forgotten until a British group hunting tigers stumbled across them in 1819.

The impressive caves are resplendent with many carvings and sculptures that show the life of Buddha. The magnificent art is reputed as being the beginning of classical Indian art. In 1983, the Ajanta Caves received UNESCO World Heritage status.

Situated amongst lush forest and hewn into the side 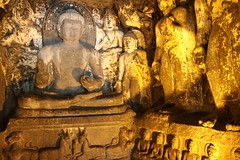 of the cliff along the Waghora River, the caves were once joined by a set of stairs that reached the waters edge. Now they are accessed by a road and a path runs along the side of the cliff allowing for easy access.

The caves are Buddhist monastic buildings and are numbered according to where they are located on the path starting from the entrance. Some of the caves are unfinished and some are smaller shrines