Almost everyone we spoke to, regarding our Maharashtra itinerary, discouraged us from stopping at Alibag. Even Lonely Planet did not mention it in their ‘Maharashtra coastline’ section . But Madhu and I, somehow, couldn’t let go of it. We’ve both visited it as kids and have fond memories of walking to the ‘fort in the sea’. So, adamantly, we took a State Transport bus from Thane at 9am this morning and got to Alibag around 12:30pm.

We checked into Akshay Bungalow, rested a while and then headed out towards Alibag beach. The bungalow’s caretaker made it sound like it’s just a few minutes away. And it probably was, but at 2pm in the heat, the walk felt long and laborious. Along the way we noticed how much Alibag has grown in size. When we last visited, it had felt like a small village-town with hardly any amenities. Today it is a mid-sized town with wide streets and plenty of stores, including a Reebok factory outlet .

A rectangular, narrow, stone-paved promenade sits parallel to Alibag beach. It is lined with Bhelpuri stalls and coconut-sellers along with a few benches to relax on. Someone had told us that there’s a small museum near the beach that we could visit. So the plan was to spend the afternoon at the museum and then head out to Kolaba fort in the evening by which time tides would be low. But when we got to the beach, a local auto-rickshaw driver informed us that the museum is about 25kms away and not really within Alibag . Suddenly we had nothing to do until the tides lower, which wasn’t expected to happen until at least 4:30pm. So, instead of waiting in the heat, we snacked on some coconuts and took an auto back to our hotel. After a refreshing nap, we again headed out to the beach at 4:30pm.

Kolaba Fort was constructed on an island off the Alibag beach in 1680 by the Maratha ruler, 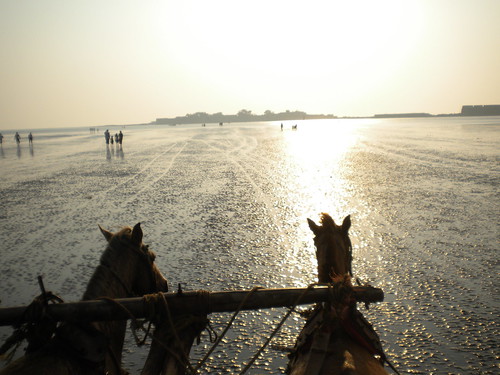 Chhatrapati Shivaji. The island is close enough to the beach and can be accessed on foot during low tides. And this is what we were waiting for. We sat on a bench at the beach promenade until 5:30pm and then slowly the water started receding. We saw many locals beginning to walk across to the fort, wading in ankle-deep and in some places, calf-deep water; it didn’t look very appeasing. So we hired a horse carriage to take us across, wait and bring us back .

It was a bumpy ride across to the fort but short and quite fun! We alighted at the 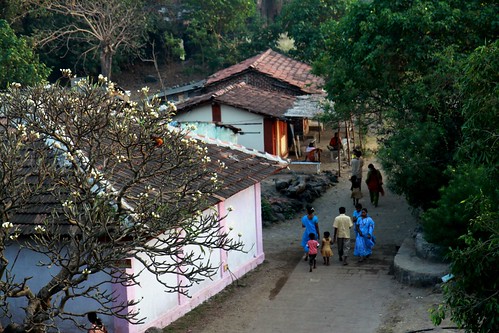 entrance and entered the fort through an enormous, stone archway. It had carvings, though quite eroded, of tigers, elephants and peacocks. Inside we bought tickets (no camera fee) and were amazed to find a small hamlet within the fort walls. There were actually people living there! The Kolaba Fort is a national, protected monument so it was surprising to see that the govt was letting people live within. But to their credit, the place was well-maintained and not dirty.

The fort, today, is simply a huge ruin of bastions and ramparts in a beautiful sea-side setting. 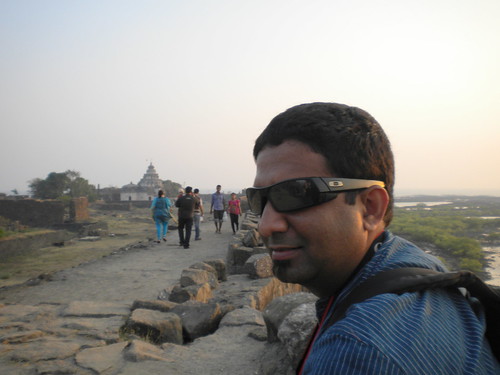 We walked atop its walls and loved the views out to the sea or the Alibag shoreline. A beautiful temple dedicated to Lord Ganesha sits at the center of the fort. Right across from it is a large sweet-water tank, which must have been used as a cleansing area before visiting the temple. In the lovely evening light, the fort ruins felt amazing and we were glad that we decided to spend an afternoon here. The experience of walking (or, as in our case, riding) across the shallow waters to the fort and then watching the tide submerge the path was novel and very interesting!

Apart from Kolaba Fort, there’s nothing else to do in Alibag . The beach is not big enough or nice enough to spend time at. So tomorrow we’ll head further south to the town of Murud to visit Shivaji’s other, more reputed, sea-fort at Janjira.