We got to Aurangabad around 8am today morning. As soon as we got off the bus, we were surrounded by auto-drivers asking us where we would want to be taken. Over the past 2 and ½ weeks in Maharashtra, we’ve never been hassled by auto-drivers or other touts; in fact, we’ve been largely left alone. But here, things immediately looked different. I could sense the ‘tourist town’ feel in the air.

This was the first time that we had undertaken an overnight bus journey. The Deluxe ‘Sleeper’ bus had single or twin beds, instead of regular chair seats. Even though it wasn’t the most comfortable bed we’ve laid on, it was definitely better than sitting through such a long journey. Till date, the longest bus journey we’ve been on is probably the 6hr one from Jaipur to Gurgaon. And that had been a torture, mainly because I’m unable to make myself use the restrooms provided by the roadside hotels! Most often than not, they are stinky and quite poorly maintained. So I usually stop drinking any liquids a couple of hours before the journey, and throughout it as well, to ensure that there are no emergencies. And this has more or less worked well for me, except on the Jaipur-Gurgaon stretch, which turned out to be a little too long. With the overnight trip, I knew I would have to use the restroom at least once and I mentally braved myself to deal with it. Thankfully, though, one of the restaurants the bus stopped at had a relatively usable restroom and this saved me for the rest of the trip. I doubt I’ll be this lucky every time, but now I’m a little more confident of undertaking long bus journeys.

At Aurangabad, the bus dropped us off near the railway station from where MTDC’s Holiday Resort is quite close. So we checked into it, ate breakfast at their onsite restaurant and then relaxed for a couple of hours before heading out to explore the city.

Aurangabad was never prominent in India’s ancient history until Aurangzeb decided to make it his capital in the 17th century. And it was during this period that Bibi-ka-Maqbara, Aurangzeb’s wife’s tomb, a replica of the Taj Mahal, was built. However, Aurangabad’s main reason for popularity in the tourist circuit is that it’s an excellent base to visit the World Heritage sites of Ellora and Ajanta. And this is why we are here too! But, of course, since we are here, there’s no leaving without visiting the city’s prominent landmarks.

We hired a private taxi to take us around town for Rs.400. Our first stop was Aurangabad’s caves, 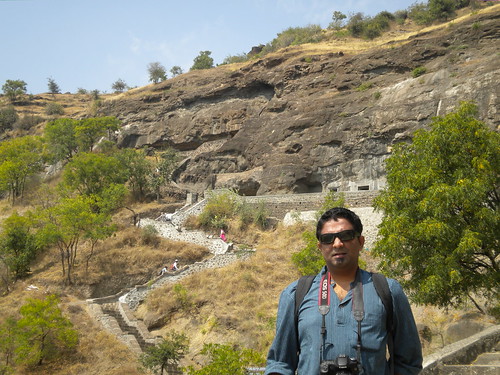 some 3km north. These were carved out of the hillside by Buddhist monks in the 6th and 7th century AD. There are about 10 caves comprising of 2 groups, which are about a kilometer apart. The road leading up to the caves, forks at one point with 5 caves on the left and the rest on the right. We were taken to the ones on the left first. We bought tickets at the entrance and then climbed quite a few stone steps to get to the caves. The hillside, though dry, was picturesque and we loved the fact that there weren’t many other visitors around. 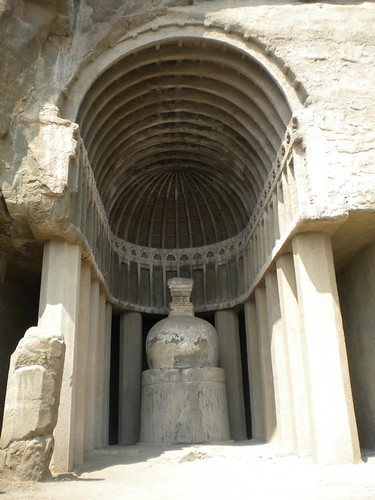 they weren’t very special. But we were so wrong! These caves are quite spectacular and if nothing, are a great precursor for what was in store for us at Ellora and Ajanta. Most of the caves have pillared verandahs with square bases and bracket capitals decorated with female figurines. One of the caves has a large, seated Buddha with his hands in the preaching mudra – this was absolutely breath-taking! Cave# 4 was the oldest of the lot with a stone stupa in the center and arched, stone beams adorning the ceiling. The stupa here  represented the Buddha and his teachings.

In the 2nd group of caves, Cave# 7 was absolutely spectacular! It had an inner sanctum, which enshrined a lovely Buddha idol. Small, dark cells at the back had more images of the Buddha and were probably living quarters for the monks. But it was the singing and chanting of the foreign visitors in this cave that made the visit very memorable. They were a large group; a couple of them sat within the inner sanctum meditating, while a couple of them stood behind the shrine and chanted quietly creating a lovely vibration throughout the cave. One lady sang something in a foreign language; it sounded like a choir song at church and was absolutely mesmerizing. The entire experience gave us a taste of what it must have felt like for the monks when they sat in the hall to pray collectively.

Our next stop was Bibi-ka-Maqbara, which wasn’t too far! This was a tomb built by Azam Shah, 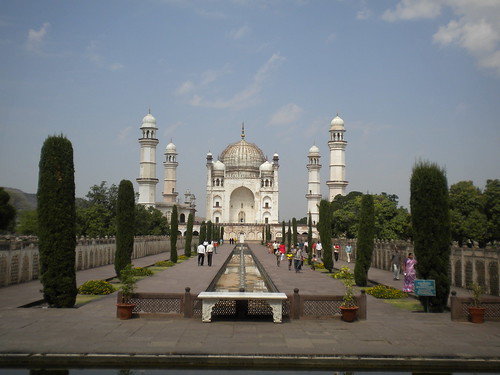 Aurangzeb’s son, for his mother, Rabia-ud-Daurani. He wanted to make an exact replica of the Taj, albeit at a smaller scale. However, Aurangzeb, who is known for his frugal lifestyle, did not want to spend too much of the state’s treasures on a tomb, so the budget for its construction was limited. Because of this, Bibi-ka-Maqbara is mainly covered with white plaster instead of marble, which is used sparingly on the structure’s front facade. The tomb is enclosed within a large compound, surrounded by lawns on all four sides. As we entered the complex, we realized that it is quite a poor replica of the Taj . It is considerably smaller in scale and doesn’t have even an ounce of Taj’s graceful beauty! Like Madhu says, if an attempt hadn’t been made at replicating something as monumental as the Taj, Bibi-ka-Maqbara could have been known for its own architecture and not as a replica.

The lawns in the front of the tomb are nicely maintained and quite green but work is still in progress on the lawns behind, where the grass has completely dried up and weeds abound. Inside the structure, we were able to view the tomb, which is placed at a lower level. Unlike the Taj where Mumtaz’s actual tomb is not visible to the public, Rabia-ud-Daurani’s tomb is the true one. It is covered with a large, green cloth and people had thrown many coins on it (not sure why!).

The last stop of the day was Panchakki. It is basically a water system, which brought in 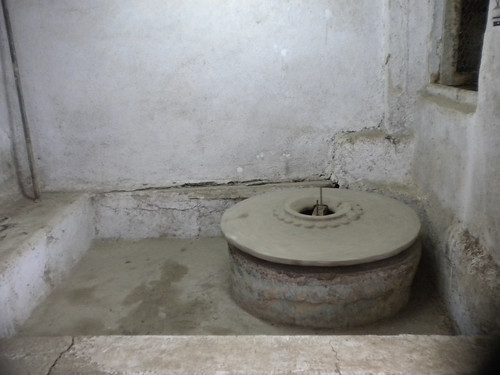 water from 6kms away using earthen pipes and was used to grind grains. Back in the day this was an engineering marvel and therefore, attracted a lot of attention. Today there’s no real reason to visit this site unless one wants to pay respects at the tomb of Baba Musafir Shah who is buried here. We went out of curiosity and found it to be a complete waste of time! The ‘chakki’ that grinds the grain is still working to this day but is quite boring to look at!

We got back to our hotel room late in the afternoon and spent the evening relaxing. Later at night, Madhu’s cousin who lives in Jalna (some 45kms away) dropped by and took us out to dinner. Tomorrow we will head out to see our first World Heritage site within Maharashtra – quite excited!