The tour of Ellora was done by around 12:30pm, after which we had a refreshing lunch at MTDC’s Kailash Restaurant. We had the whole afternoon to check out Aurangzeb’s tomb and fort before heading back to the hotel. Aurangzeb is buried in a small, walled village called Khuldabad, which is just 3kms from Ellora; so that was our first stop. 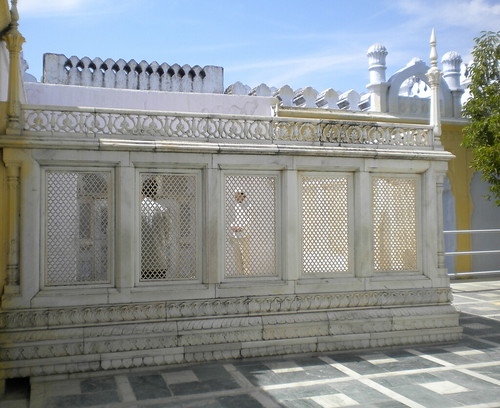 Aurangzeb and his family being amongst the last. In spite of his state’s vast riches, Aurangzeb is known to have led a very frugal lifestyle and wanted this maintained for his burial chamber as well. He insisted on a simple one that could be constructed using only the money that he had made from sewing and selling Muslim skullcaps. This amounted to Rs.14 and change, with which only a mud tomb could be built in the courtyard of Alamgir Dargah. This is amazing considering that nearly Rs.7lakhs (Rs.700,000) was spent on his wife’s tomb (Bibi-ka-Maqbara – built by their son) and Rs.3.2crores (Rs.32million) on the phenomenal Taj, all three having been built within a century of each other!

A marble platform was later built around Aurangzeb’s mud tomb and this was enclosed within  a latticed, marble enclosure. As we walked into Alamgir Dargah, we were directed towards this enclosure by a blind volunteer who then proceeded to give us a brief history of Aurangzeb and his death in Hindi. While we stood listening to him, a few men entered the enclosure and paid their respects by placing flowers on the marble platform and splashing drops of Ithar (perfume) on the pall. It was quite interesting to watch.

Behind Aurangzeb’s tomb is a small, domed, white marble structure that houses the tomb of Saint 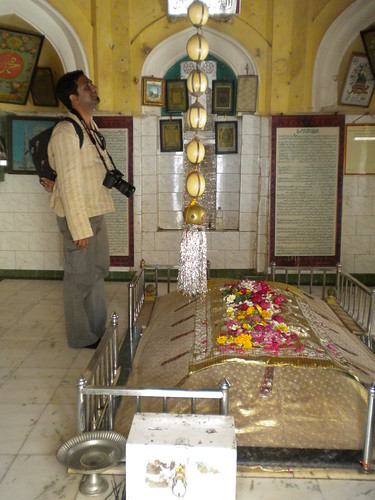 Burhanuddin Gharib Chishti. It dates back to the 14th century. Women are not allowed inside but I could stand near the doorway and peek in. Its interiors are quite pretty and definitely worth a look. From here we were led to the back of the Dargah where a sealed door encloses, what is said to be, the robe of the Prophet Mohammed. Once a year, on the Prophet’s birthday, the robe is placed outside for public viewing. There was a donation box next to the door, collections from which are used to feed orphan kids, irrespective of their religion – really nice!

After Khuldabad, our next stop was to be Daulatabad but en route we noticed several showrooms/stores selling hand-woven Himroo fabrics, which were introduced in the region by Mohammed Tughlaq in the 14th century. Himroo uses Persian designs and is usually made from cotton and silk threads. Back in the day, gold and silver threads were used to make fancy brocade-work for the royals. Today most Himroo shawls and saris are mass-produced using machines. However, some traditional workshops still exist in the city and the showrooms we saw promoted this dying culture. I couldn’t let go of the opportunity to shop .

After shopping (mainly gifts for family), we drove on to Daulatabad where we were dropped off right in 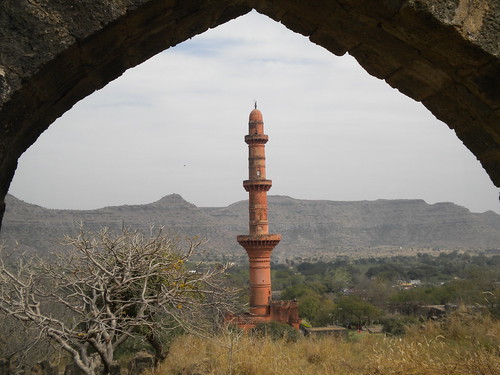 front of the town’s only attraction – the 12th century fort built by the Yadava rulers of the region. It was renamed as Daulatabad (City of Fortune) in the 14th century by Mohammed Tughlaq who decided to move his capital here from Delhi. We entered the fort thru a massive arched gateway beyond which was a small courtyard lined with canons from Tughlaq’s days. Another arched gateway opened out to a dirt path that led to the fort’s most visible landmark – the 60m high Chand Minar. After visiting this as a child, I had often confused this structure to be the same as Delhi’s Qutb Minar .

Chand Minar (Tower of Moon) was built by Tughlaq in 1435 as a 4-storied victory monument. 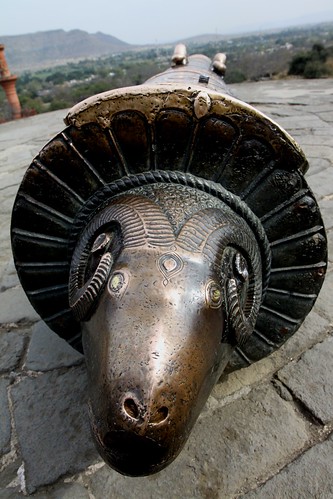 Today,  it looks pretty well-maintained but has been painted an unnatural shade of rust. To avoid any accidents, intentional or otherwise, the tower is closed to the public. Just across from the tower is a large, square courtyard with a Bhagwati temple within its pillared hall. From here, we walked on towards the Devagiri hill where we had to pass thru another gated entrance. Here, set in a corner, is Chini Mahal, a palace where the king of Golconda is rumored to have held captive for 12 years! It is pretty much in ruins today. A 6m long canon sits atop a tall, stone platform close to the palace. It is made of a blend of 5 metals and has some engravings in Persian, which includes Aurangzeb’s name.

The fort is famed for its design as it has several doorways at odd angles with spike studded doors to prevent elephant charges. We had passed thru three of these already. In addition to these, there is a deep moat, which is rumored to have been filled with murderous crocodiles to discourage any swimmers from getting across. We crossed this over a rickety bridge that got me quite nervous! After yet another doorway we had to pass thru a dark, bat-infested passageway. This truly got my heart racing and the stink of bat-urine made it worse !

At the other side, a set of steep stone steps led to an upper platform but this was newly 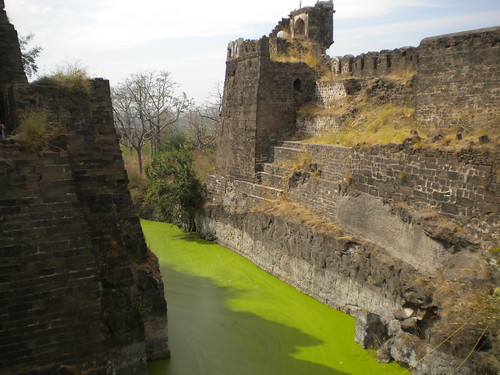 built by the govt for the convenience of visitors. The original path to the upper levels of the fort is thru a series of caves that are dark and stinky and infested with more bats. This treacherous path is locally known as the ‘Bhool Bhulaiya’ . A guide stood at the mouth of the cave with a kerosene-lighted torch in hand, offering to guide visitors thru the caves to the upper level for Rs.30. I refused to set foot in it . But Madhu couldn’t let go of the opportunity to experience this. So he signed up for the cave-walk while I decided to use the newly-laid stone steps. When we met at the platform on the upper level, Madhu said 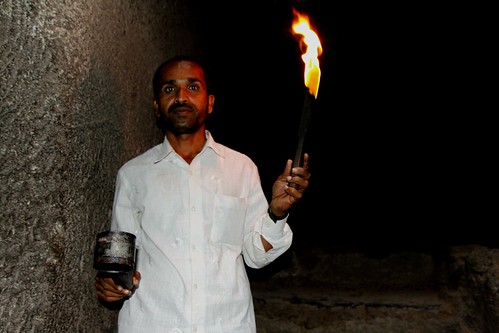 that it wasn’t all that scary especially since the path was well lighted by the torch. However, at one point the guide had extinguished the torch and that had plunged the whole place into pure and complete darkness. Madhu claimed that their walk thru Bhool Bhulaiya was the highlight of his visit of Daulatabad fort ! The platform where we stood was only mid-way. More dark caves and passageways lead eventually to the top of the hill. These measures made the fort quite impregnable in its day. They surely impressed me!

We were back in our hotel room by 4pm. It had been a tiring, though fun, day. While surfing the net we found that the newly-released Hindi movie, My Name is Khan, which opened to fantastic reviews, was running in one of Aurangabad’s premier cinema halls – PVR. Madhu and I are total movie buffs and have tried not to miss any good Hindi movies while we are out here . So we ran out to catch the 6:30pm show of this movie. How I wish we had stayed in our hotel room and relaxed instead! The movie was a disaster; the first half was bearable because of beautiful Kajol but the second half made us cringe! Can’t believe this movie received a 5-star rating in the papers! Later for dinner we stopped at Domino’s for a pizza, which was even worse than the movie! Sadly, the day had ended quite disastrously !