Yesterday we boarded the Tapovan Express train from Jalna at 1:23pm and got to Nasik around 6pm. From the train station, we took an auto to Ginger Hotel, which we had called in advance for our stay. It was a good 12kms away. En route I was surprised to find the streets of Nasik more developed than what we have seen elsewhere in Maharashtra. I had expected it to be similar to Aurangabad, which had a distinct small-town feel to it. Nasik, though, gave a nicer vibe, wasn’t as congested and had a, comparatively, milder climate. We immediately took a liking to it.

Nasik sits on the holy river Godavari, known as the Ganges of the south, making it one of Maharashtra’s top pilgrimage towns. Moreover, it is said to have been the site where Laxmana, of the epic Ramayana, cut off the nose of the demon Surpanaka, Ravana’s sister; the town has many temples and sites associated with this story. Nasik is also the base from which to explore the famed temples of Trimbak and Shirdi. Quite rightly, the state govt has put up signs of ‘Welcome to the City of Pilgrimage’ on the main highways leading to town. Madhu and I plan to cover just a couple of the main temples within the city and the temple at Trimbak. However, our most important reason to visit Nasik was to tour the famed Sula Vineyards – not exactly a pilgrimage stop ! 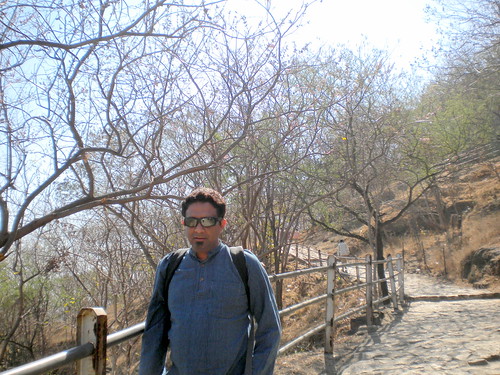 dating from 1st century BC to 2nd century AD. Before coming to Maharashtra, we had no idea that the state had such a treasure trove of Buddhist architecture! There are ancient caves on an island off the Mumbai coast and then many inland, including those at Nasik, Ellora, Ajanta and Aurangabad.

Pandav Leni caves are about 8kms south of Nasik city on the Bombay highway. We took an auto to the base of the hill that houses the caves and then climbed some steep, stone steps to get to them. There are, in total, 24 east-facing caves – some have exquisite carvings while others are quite plain. Except Cave 18, which is a Chaitya (prayer/assembly hall), all other caves are Viharas (monasteries). We started at the southern end and walked thru all 24, enjoying every bit of them. The carvings were all really nice just like the ones in Aurangabad – in fact, these were a notch better! Some of the caves had Jain idols as well;  these had been carved out in the 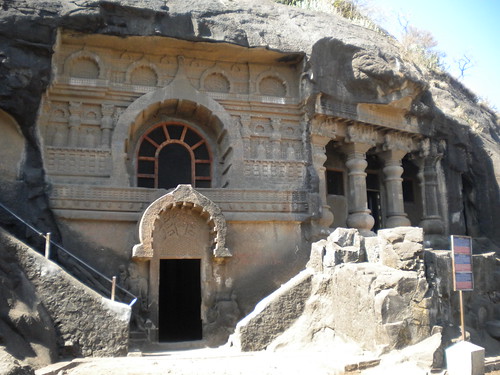 11th century. As we were walking thru the caves, we met a friendly couple with 2 kids. The man said that he had been to Pandav Leni 20 years ago and in those days all the caves had sculptures. Today, though, there are quite a few that are absolutely devoid of any. He claimed that these caves have been looted over the years . Only as recently as 3 years ago did the Archaeological Survey of India bring them under their maintenance and care!

Then something funny happened ! We were exiting one of the large Viharas when the caretaker stopped by with torchlight in hand. He eyed us suspiciously and then, out of the blue, addressing Madhu, said 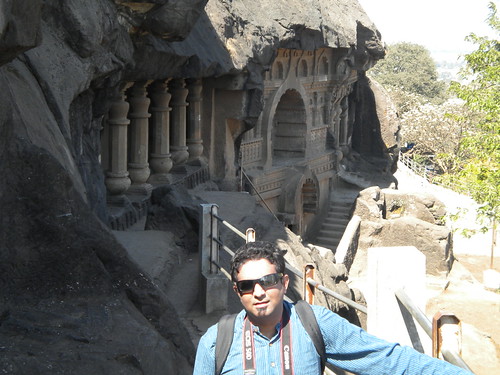 that this is a national monument and we must respect its sanctity. We were completely confused by this statement. We looked at each other and wondered what made him say this. When Madhu asked him if there was a problem, the caretaker said that some visitor, while exiting the caves, had complained to his office that a couple was cozying up in one of the dark corners of the caves and behaving in a ‘vulgar’ manner. We were both shocked and amused ! I laughed and assured him that Madhu and I have been married a little too long to go about searching for dark corners in public areas LOL ! Madhu demanded to know who had complained and whether they had pointed to us specifically. Seeing our reaction, the caretaker probably realized that he had got the wrong people. He apologized and admitted that the complainant hadn’t really pointed to anyone specific. Since we were the first ones he spotted, he assumed it to be us . I wonder if he eventually managed to catch the actual culprits – I hope he did! Just to be safe, Madhu and I kept a one-arm distance from each other for the rest of the tour, lest somebody else complains about us LOL .

At the bottom of the hill is a huge complex housing a Stupa-styled structure, called the 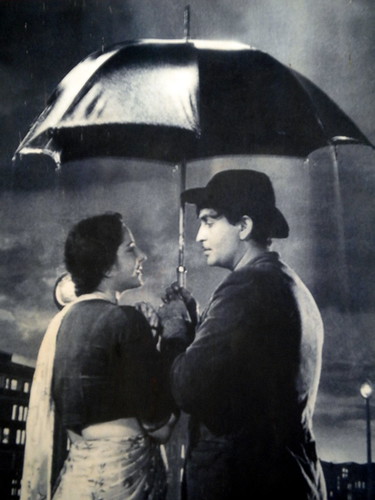 Buddha Vihar, and a memorial to Dadasaheb Phalke, the founder of Indian cinema. The complex is large but the space is not very well-utilized; it’s actually quite confusing. The Buddha Vihar sits in the foreground with the Dadasaheb Phalke memorial at the back, both separated by a parking lot, a large lawn and children’s playing area. We walked to the memorial first and found it to be a high-ceilinged, deserted hall with large posters of films and a brief history of the founder. Dadasaheb Phalke wrote, directed and produced India’s first full-length feature film, called Raja Harishchandra. He made about 90-odd full-length films in his 37-year long film-making career and these were mostly based on stories related to Indian mythology. Today’s generation may not be familiar with his work but his name is well known, especially because of the Dadasaheb Phalke Award, instituted by the govt of India for lifetime contribution to cinema. The memorial hall displayed large posters of popular Hindi films from Raja Harishchandra to the most recent ones – it was quite a colorful sight!

Later we walked into the Buddha Vihar after leaving our shoes near the entrance. The Stupa-shaped,  domed structure houses a large, circular, meditation hall with a huge, gold-plated idol of the Buddha. It was a beautifully, serene place. What amazed us was the fantastic acoustics within the hall; every little sound, even that of tapping of a finger reverberated throughout it clearly; loved it! Madhu and I sat here for a while and realized that it’s probably one of the best places to meditate in peace, especially early in the mornings. The circular wall had many windows making the place airy and cool, despite the outside heat.

Our auto driver dropped us off at the heart of Nasik’s old pilgrim town at the center of which lies the fascinating Ram Kund. It is believed that Lord Ram and Sita, from the epic Ramayana, bathed at this spot some time during their 14-year exile. In 1696, a holy tank was built on the spot where it is believed they took their bath. Since then, devotees have been gathering here to plunge the ashes of family, on the strong belief that it will help the dead to get salvation. This place is absolutely fascinating! We got there mid-afternoon and hung around just for a few minutes; stopping by sometime around sunset would have been nicer and cooler! A colorful vegetable bazaar lines one end of the Ram Kund. There were also some stalls selling yummy-looking sweets and wax diyas. Several old temples surround the ghats. We visited one of them and were amazed to see that it was in South-Indian style with many Tamil-speaking visitors.

Our next stop was across the street, up a narrow, hilly road, at the Kala Ram Mandir. En route, we stopped at an old, family-run tea stall. They served us the best tea we’ve tasted in Maharashtra thus far – it was fantastic! We noticed a large pile of powdered sugar mixed with powdered dry fruits and some spices in one corner of the room. Out of curiosity I asked about it to the boy who had served us tea. He mumbled something vaguely about it being used for preparing tea but that didn’t make complete sense; either he was not in a mood to share too much information or that was their family’s secret recipe for the fabulous concoction we had just tasted !

The Kala Ram Mandir is an old temple built by the Peshwa rulers of the region in the 18th century. The words Kala Ram literally mean ‘Black Ram’, which alludes to the idol of Lord Rama built of black stone enshrined within the temple. Black stone idols of Laxmana (brother) and Sita (wife) flank the idol of Lord Rama. Sadly, no photography was allowed inside. The temple sits in a lovely stone courtyard enclosed by arched, stone aisles where a few stalls sold pooja-related items and pictures of the temple and the idols.

A few meters ahead of the temple is the Sita Gumpha (Sita Caves). It is believed that Sita was kidnapped by the demon Ravana from this very spot! This temple is a subterranean cave, which is accessed via extremely narrow, low tunnels. I’m slightly claustrophobic so this wasn’t a fun exercise for me . We had to get down on all four limbs to go through the tunnels, which eventually lowered us into a small, stone hall. This hall enshrined a stone Shiva Lingam, while another adjoining hall enshrined the idols of Lord Ram, Laxman and Sita. From here, another set of narrow tunnels led us, thankfully, back up to the world. Madhu had totally enjoyed himself while I was just happy to be able to breathe again normally!

This area of Nasik, known as the Panchavati, has many other small temples and sites relating to the Ramayana but Madhu and I had had enough for one day. Moreover, it was almost 3pm and we hadn’t had anything to eat since breakfast at the hotel. Lonely Planet had recommended a small Udupi restaurant so we took an auto there, ate our fill and then headed back to the hotel.

For tomorrow we have booked a car to take us to Trimbak and then to Sula Vineyards. It will be our last day of sight-seeing before we head back home to my parents’ place.