North of Harihareshwar are 2 small beach towns – Shrivardhan and Diveagar – that are also quite prominent on the Konkan coast. So today morning we headed out to explore them. As expected there was no other way to get to either of them other than our favorite Duggis; not that we were complaining! 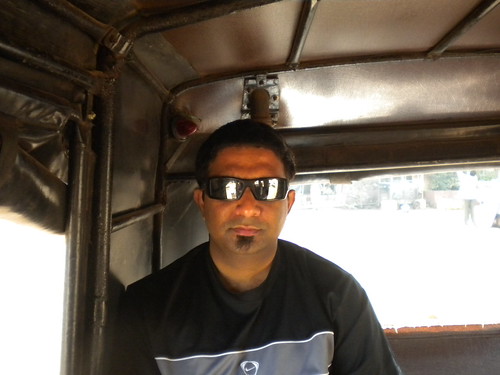 to Shrivardhan, which is 18kms up the coast and from there we took another Duggi to Dive-agar, which is another 18kms north. The first 18kms took just about 45minutes but the last 18 took more than 1hr 15minutes . And this is because the road to Diveagar passes thru some small, coastal fishing villages where the roads are still quite undeveloped. The hilly terrain doesn’t help matters either. En route we saw fish being dried out in the sun right by the roads; the area stank quite a bit! We were tired by the time we got to Diveagar and I started to wonder whether it was truly worth the 2hr bumpy ride. But I shouldn’t have worried !

Diveagar is a gem of a coastal village. It’s incredibly small with neat bungalow-lined 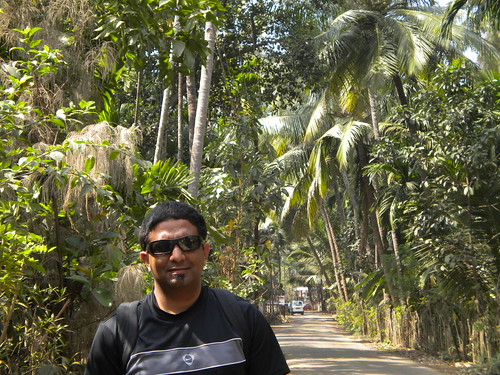 roads and tons of banana plantations, coconut groves and betel-nut palms. Compared to Harihareshwar, it seemed wealthier, less crowded and more chilled-out. We immediately wished we had stayed here instead of the former; if only we had known!

Before heading to the beach, we stopped and ate fried fish and rice on the porch of 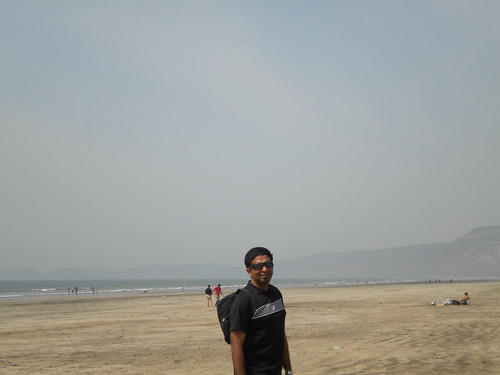 a Diveagar family’s home – it was heavenly! From here the beach was just a few minutes away and it was quite spectacular. In length, it is probably twice as long as the one next to the MTDC resort in Harihareshwar, and wider. There was no shaded place to sit so we walked towards its northern end enjoying the lovely landscape. As we walked on, we saw a bunch of birds crowded near the edge of the water. We tried to get a closer look and found that they were waiting around for the fishermen who had walked into the water with a long net. We had never seen fishermen in action, so we waited around with the birds as well .

The men waded out into waist-deep water with the net. Within just a few minutes, 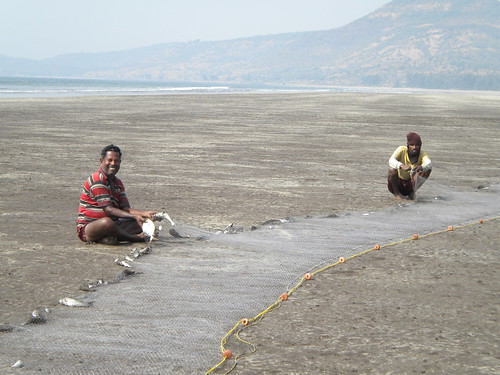 they dragged it back on to the shore while we watched with baited breath. The entire length of the net had fishes trapped in it ! The men then sat down and started picking and sorting them, breaking their sharp fins and placing them in a basket. When we started to take pictures, they seemed amused and posed with the fish for us . We started chatting with a local who was also standing around watching them and he started naming some of the fish for us. The catch was mainly of Catfish, locally known as ‘Shingada’. There were also a few Pomfrets but these were African Pomfret as their fins had a yellow tinge; apparently Indian Pomfrets have a light blue tinge. They threw away little Blowfish that were also caught in the net – the locals don’t eat or sell them. The birds were probably waiting for these .

The local we were chatting with turned out to be a Mumbai resident. He, Deepak, 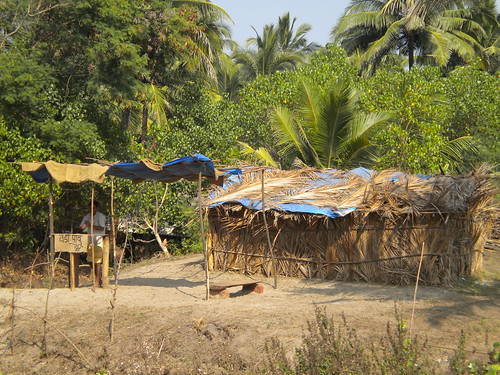 was born and raised there. He worked at a diamond merchant’s place sorting and polishing diamonds but left it all in 1998 to return to his ancestral home-town of Diveagar and has been here since. His wife, Deepika, and daughter, Sneha, also came out to the beach to survey the day’s catch. They had hoped to buy some but didn’t care much for Shingada, so they didn’t buy anything. They were very warm and talkative. Deepak runs tourist cars for a living and also has a small restaurant where they cook food on order. Deepika offered to fry fish for us; she said that most customers buy fish off the beach and bring it to them for preparation . Eventually, Deepak invited us to have some tea at their place, which was just off the northern end of the beach between the woods. Madhu later told me that they had seemed a little too warm and he had almost anticipated that they would try to sell something to us once we go to their home. But they did nothing of that sort. In fact, they are probably the most genuinely warm people we have ever met in our lives till date! When Deepak said he ran a restaurant, we expected something which would have four walls, ev 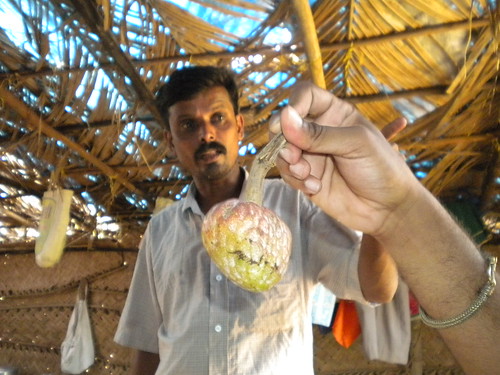 en if they were made of mud. But his restaurant was nothing but a thatched roof supported by 4 wooden poles and a few chairs thrown around. Behind this was his little mud home, inside which we were cordially invited. Their home was a small 10×10 place neatly arranged with a chair and a small stool for seating, a prayer area, a cooking area, an utensils area and a clothes area. The center of the shack was empty and that’s probably where the family of 3 slept. Madhu and I were amazed at how well every corner of the house was utilized and yet how perfectly clean and neat it was. We occupied the chair and stool and chatted with Deepak while Deepika made us some yummy chai. Deepak talked about setting up a proper restaurant, one with walls, in a year’s time. He was waiting for some permit to come through. His parents are now no more and he has no relatives to speak of, so his wife (and her relatives) and child are his only family. He seemed to have big plans for his future restaurant and we’re sure he’ll do well. When we finished our chai, Deepika gifted us a fruit called ‘Ram-phal’, which is grown near her brother’s home in the same area. By this time, Madhu and I were just a little overwhelmed with all their warmth – it was absolutely humbling. The couple was obviously not financially well-off and must lead a hard life but they seemed so cheerful and absolutely content – it was amazing! In fact, that’s what we noticed all along the Konkan coast. Most locals who shared the Duggis with us would have big smiles for all seated within and would happily chat away. They all seemed so happy with life! It’s so rare to see this in urban, city life.

Madhu and I left Deepak and Deepika with best wishes for their future restaurant. They are people who we’ll never forget all our lives¦

We walked back south on the beach and stopped by a coconut vendor for some refreshing coconut water drink. We asked the vendor for directions to Diveagar’s other attraction – a Ganpati temple. Apparently, in 1998, a local woman found a gold Ganpati mask adorned with some gold ornaments buried in her yard. She surrendered the findings to the local panchayat, which installed it in the local Ganpati mandir. Since the mask was discovered on a very auspicious day and time, it was considered a divine intervention and shot to immediate fame. The coconut vendor said that Diveagar has had many visitors since then and it is due to them that businesses like his still run – he sounded grateful to the phenomenon.

The temple was just a few minutes away and was, surprisingly, not commercial at all. There are few flower and coconut vendors outside and a large parking facility in the front. The temple structure is a simple, white-washed, square one with the mask and an orange Ganpati idol housed within a caged enclosure. On display was a copper chest in which the mask was buried – it looked beautifully ancient! Since it wasn’t crowded or chaotic, the place felt serene and calming. What a contrast from most other famous temples we’ve been to!

Madhu had read online that the lady, Draupadibai Patil, who found the mask and surrendered it, never got any recognition or support from the govt and was quite ignored. But visitors can stop by her land where the mask was found and help out in any way they can. So we asked around and found that her land is situated just behind the temple on a parallel road. When we got there we found a lovely plot with banana and coconut trees, beautifully maintained. There was a small shrine at the spot where the mask was found and a shaded, seating area. We found Draupadibai Patil herself sweeping the yard at the back. She is a frail, unassuming, warm, elderly lady. She said that she lives in the neighboring village Borli (about a km away) but comes here to work in the yard from dawn to dusk. We took a picture with her, placed some money in her donation box and bought a picture of the mask as a souvenir for my mom.

As we boarded a Shrivardhan-bound Duggi at 4:30pm, we realized that we had had the most amazing day at Diveagar. It was the people there who made all the difference – we had been treated with such warmth and kindness!

There is a beach at Shrivardhan too so we before hopping on to a Harihareshwar-bound Duggi, we went to check it out. The town itself is a little more developed than Harihareshwar or Diveagar but looks like any other Indian small town; there’s no unique charm. So we didn’t bother exploring it. We hadn’t heard a lot of good things about the beach either, so our expectations were low; and rightly so. The beach was a little filthy and there was hardly any sand to talk of. We walked around for about 10 minutes and then took off without wasting too much time. And thank God for that ‘coz when we got to the Duggi-stand around 6:30pm, we got the last Harihareshwar-bound one .

4 Responses to Day trip to Diveagar