We had 3 beach-towns listed between Murud and Ganpatipule – Harihareshwar, Dapoli and Guhagar. Getting to Harihareshwar from Murud had been quite a trek. So we knew that getting from there to Dapoli is going to be equally tiring. And we weren’t wrong !

Yesterday morning we took a Duggi from Harihareshwar to Baghmand (4km) from where we took a ferry (a 10-minute ride) to Bankot. From there we took another Duggi to Devhare (20kms) from where we took a State Transport bus to Mandangad (10kms) and then again another State Transport bus to Dapoli (35kms). After all this, we had still not reached our destination. Dapoli is a hill-station with its beaches a good 15km downhill. So we took an auto from the bus station and eventually got to the end of our journey at Dapoli’s Karde Beach. We had to hop 6 different modes of transport to get here – CRAZY !

But it was definitely worth the trek. Karde Beach is absolutely gorgeous! 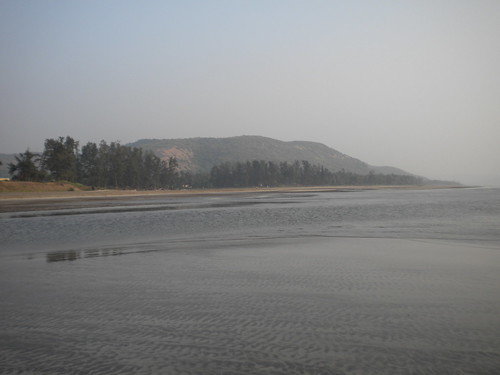 Our auto driver had mentioned that it’s a 12km stretch of sand; we had found that a little hard to believe. But when we got here, we realized that it’s probably true. The beach stretches on and on forever ! We checked into Hotel Sagar Sawli, which had a great location with the beach just across the street. Around 5pm we walked at least 2km north on it and enjoyed the lovely landscape. We ate Bhelpuri at one of the snack-stands and watched the sun set. And suddenly, before we knew it, it started to get dark and we had 2km of lonely stretch of beach ahead of us to get back to the hotel. So we started hurrying back quickly.

On the way we saw a couple of buffaloes and a calf walking along the beach; they looked a 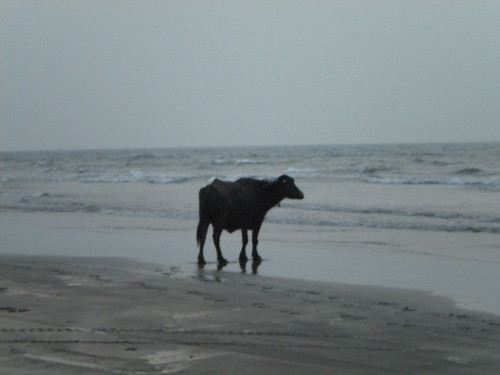 little lost. Suddenly a pack of dogs came running out of nowhere barking ferociously! For a second, we thought they were running towards us but instead they ran straight to the buffaloes. For some reason, dogs get really territorial after dark. They chased the poor buffaloes for quite a while. We tried to keep walking on but kept glancing back at this sight. Eventually, the male buffalo took a stance and seemed to stand up to the dogs that kept barking but wouldn’t dare get close; one kick from the buffalo could have sent all of them packing . We realized that as it got darker, the stray dogs could have a go at us too. There was no one else on the beach, which was a little worrying. So we left the beach and got on to the main road where the resorts were lined up and eventually got to our Sagar Sawli, which is one of the last ones, safely. Phew!

Again, for the 4th consecutive day, we are off the grid. Dapoli seems to be as remote as Harihareshwar. We couldn’t get internet access through our wireless card. My Airtel couldn’t find network coverage while Madhu’s Vodaphone would work if we stood in the balcony of our hotel. Thank God for that! Our folks would have started worrying if they hadn’t heard from us and not seen any updates on our website as well .

When we had walked the Pradakshina Marg at Harihareshwar the day before, I thought I had seen a dolphin flip up into the air and crash into the water . I couldn’t truly believe I had seen it. But Madhu assured me that I must have really seen it as he had read about their existence off the Konkan coast. I was thrilled! And to our utter glee, we found that, out here in Dapoli, locals offer boating in the morning to go see dolphins ! So today morning we woke up early to go dolphin-watching! 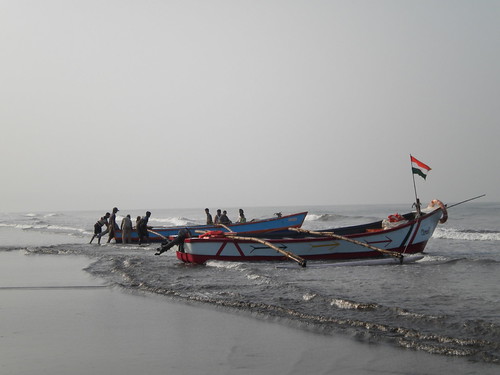 with a bunch of other patrons. We hopped on and sat in the middle row with a group of men up front and a family with kids at the back along with 2 boatmen. As we pushed off into the waters, we realized how unsafe the whole expedition was. None of us had been given any life-jackets or even instructions on what to do in case of an emergency. Moreover, the launch itself was pretty tiny and in rough seas, falling overboard would be inevitable. Oh well! We said our prayers and held tight!

Fortunately, the water was quite calm and in fact, quite relaxing. Or at least it could have been if one of the men sitting up front would just shut up! He was an animated sort and kept trying to shout out something funny to his buddies who didn’t seem to reciprocate as he would have liked. The boatmen tried telling us that it would be better to be quiet in order to have a better chance at seeing dolphins but this man just didn’t seem to get it. I was so darn annoyed with him. Madhu caught me shushing him but I couldn’t help it! I was afraid that he would scare the dolphins away¦

But he didn’t! The Arabian Sea off the Konkan Coast must be filled with dolphins ‘coz we saw many . They seemed to be moving about in pairs and kept showing up unexpectedly here and there. Most times we could only see their fins and a sliver of their bodies as they grazed the surface of the water but we also saw them flip up into the air a couple of times . It was so exciting! Unfortunately, they were a little too quick for pictures. Locals had said that the boat ride would last for up to an hour as the boatmen would never bring us back to shore without ensuring that we saw at least one dolphin. But since we saw so many within a short span of time, we were taken back to the shore by 8:30am. I also suspect that the boatmen must have had enough of the loud, brash man who hadn’t given up yelling .

Madhu had read about the Swarndurga fort, which was built by Shivaji off the coast (like the Janjira fort) from Harne Beach, some 13km north from where we were. Since we had nothing else to do, we decided to check the place out. So after breakfast, we took an auto out to Harne Beach. We were told that we could get boats out to the fort from there. It took us nearly 45minutes to get there. As the auto crossed Harne beach to take us near the boat docking area, we were appalled at the filth and litter everywhere! Even worse was the stink! Harne Beach is also famous, locally, for its fish market that’s held every evening. And that’s probably why the beach was so bad. When the auto driver dropped us off near the dock we asked him if he would wait for us to return. But he said he couldn’t and that we would have to walk along the beach to the main road in town to get an auto for our return trip. Madhu, who has a very low tolerance level for filth and fishy smells, started to feel nauseous just at the thought of walking on that beach . There was no one else at the dock so the boatman said he would charge Rs.400 to take us to the fort and back in his boat. This felt like a complete rip-off and coupled with the dirty beach, it was enough impetus for us to abort our plans of exploring Swarnadurga fort . The auto driver who had dropped us there had just about turned around to leave when we yelled and ran after him to stop. We begged him to drop us off in town from where we could get another auto back to our beloved Karde Beach. If our hotel guys were surprised to see us return from the fort so quickly, they were kind enough not to show it !

Just so that we are not stuck at the beach after dark again, we started our evening 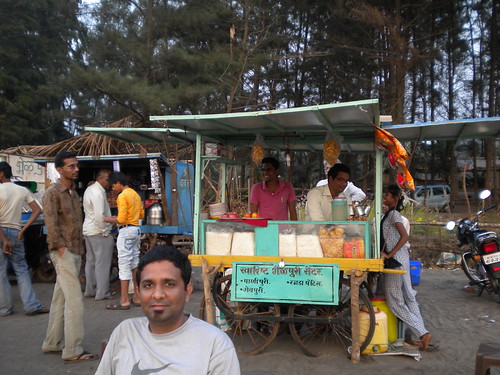 beach walk at 4pm. We walked 2km out, wading thru the shallow shore water, to the Bhelpuri stalls and settled down for some snacks. Madhu noticed a guy who had an ATV for hire. For Rs.100, it could be driven on the beach for about a kilometer and back. Madhu couldn’t resist and signed up for it. I hopped on behind him and we had a fun ride around the beach . Around 6pm, we started our 2km trek back and this time were back in our hotel room before it got too dark.

Dapoli is a great place for a 2-day beach break. The dolphins make it special and the remoteness of the place makes it a true getaway from the rest of the world. Tomorrow we will head to Guhagar, which is our last stop before Ganapatipule. I have a feeling it’s going to be as remote as Dapoli, which is nice ¦. But I’m also starting to miss my connection with the outside world .

One Response to Dapoli