Taking time to leisurely explore the carvings and sculptures of Elephanta caves on Elephanta Island will transport you to a world vastly different from the frenetic hum of nearby Mumbai.

Located just 10 kilometres to the east of the city in 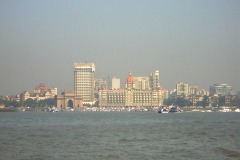 Mumbai Harbor, Elephanta Island (traditionally known as Gharapuri which translates to ‘the city of caves’) is a peaceful retreat of religious significance with a temple dedicated to the Hindu God, Lord Shiva.

Cut from solid basalt rock, it is believed that the caves were created between the 5th and 8th centuries but the identity of the architects who actually built them is largely disputed by historians.

Historically a place for Hindus to come and worship, this 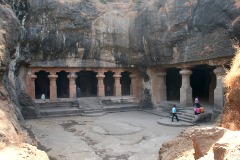 changed when Portuguese rule started in 1534. It was then that the island took on the name ‘Elephanta’, given because the Portuguese first saw the impressive Elephant statue at the entrance. Unfortunately this famous statue cannot be seen on the island as it now resides at the Bhau Daji Lad Museum in Mumbai.

Slowly the caves fell into disrepair but after a huge renovation project was implemented in the 1970s, the site was bestowed UNESCO World Heritage status. 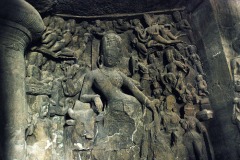 groups of caves which are located on separate hills. Five Hindu caves are situated on the western hill and are renowned for their sculptures which depict religious mythology carvings of Lord Shiva. The main cave looks out to the sea and is a temple that covers 60,000 square feet.

The smaller group of two caves on the eastern hill are of Buddhist origin. It is known as Stupa Hill due to the Stupa monument made of brick which is housed in the first cave while the other one is actually incomplete.

At the time of their construction, the caves were painted 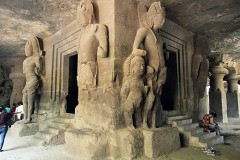 with glorious colours but time has erased much of this and only traces can now be seen.

Elephanta island is 1.5 miles long and if you have time to explore the island aside from the typical cave attraction, the natural scenery offers much to see. Forests of mango, tamarind and karang trees are interspersed with palm trees and rice fields cover the valley between two large hills.

Beware the cheeky monkeys who have no hesitation in grabbing your water bottles off you and unscrewing the cap with their nimble fingers for a drink. Keep all valuables safely hidden away or they may suffer the same fate.

How to get there

Elephanta Caves can be accessed by a ferry (one hour) that that departs from the Gateway of India.

The cave is closed on Monday.