Ganpatipule derives its name from the 400-year old Ganapati temple on its shore. 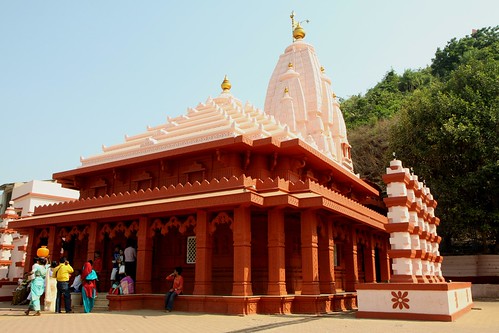 The naturally occurring or Swayambhu Ganapati idol which it houses is considered to be one of the eight sacred Ganapati sites in India known as the Ashta Ganapatis. This attracts thousands of visitors every year making it a very popular pilgrimage destination; my devout mom has been here too . Yesterday we decided to pay our respects as well.

The temple is right on the beach and within walking distance of our MTDC resort. We got there around 10am fearing long queues but, fortunately, there was hardly anyone around. We entered the west-facing temple through its northern entrance passing a lovely, 4-ft tall statue of a rat, Ganapati’s favored mode of transport, holding his favorite food – a Modak . The temple structure does not look 400 years old at all. It has a fresh coat of paint and looks like it was built yesterday! It’s nicely maintained but I would have loved to see what it looked like in its original veneer¦

Inside, we were able to get a good darshan and also sit awhile. We exited through the western gate, which opens out into a fenced-in compound, beyond which is the beach and the sea – a lovely setting! On our way out, we bought a packet of Laddoos, which are also given out as Prasad. It was yummy!

While checking into the MTDC Resort, Madhu had found a pamphlet advertising a local museum called Pracheen Konkan, a kilometer away. It sounded interesting enough, so after the temple, we headed there on foot. One kilometer can definitely be walked, but in the afternoon heat, it felt a little too long . 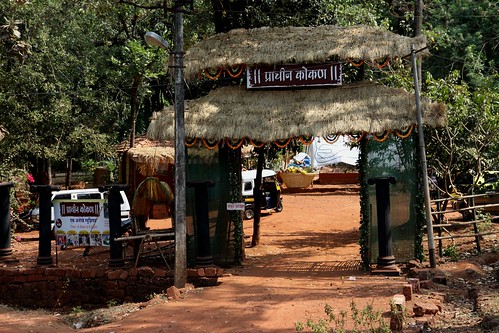 with life-size displays set in natural surroundings. The entrance fee includes a guided tour of the place. Our tour included a group of elderly Gujarati ladies and our guide was a young, local girl. In fact, the whole place was staffed entirely by young girls; they ran the ticket, store and cafeteria counters, and acted as guides as well .

The tour led us through a designated path that started off with a life-size statue of Lord Parasurama, who, according to legend, had created the Konkan Coast from the ocean. From here it led on to show models of Konkani homes, people, their craft, Shivaji’s ocean warfare and much more. It also had a ‘Nakshatra Bag’ (Horoscope Garden), which had a tree dedicated to each star sign. Konkani tradition believes that if one nurtures the tree, which is dedicated to their star sign, it will bring immense wealth and prosperity. Madhu took a picture of the tree dedicated to Gemini – now we just need to find a place to plant one and nurture it . 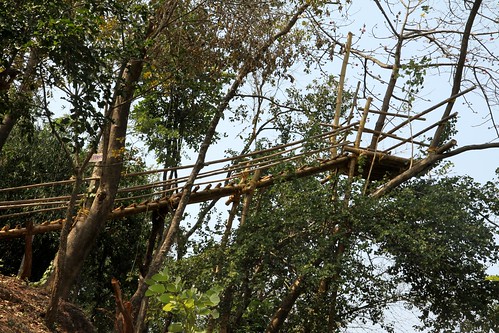 spectacular views of the surrounding area. A couple of the Gujarati ladies were adventurous enough climb up with us as well . They were a loud, sweet and fun bunch !

The museum store sells wooden toys, jewelry and other handicrafts. We bought a packet of dried mango, which seemed to be a specialty of the mango-producing area . The cafeteria is a small shack serving traditional Konkani food items like Modak and Kokam Serbet. We tried the Modak, which was quite similar to a Kerala snack called Kozhkatta. It tastes quite similar but is shaped like a ball instead of the unique shape of a Modak We also tried Kokam Serbet and Karwanda Serbet, both of which were quite good; the former being the best.

The MTDC Resort has an Ayurvedic Massage center on its grounds. So in the afternoon Madhu 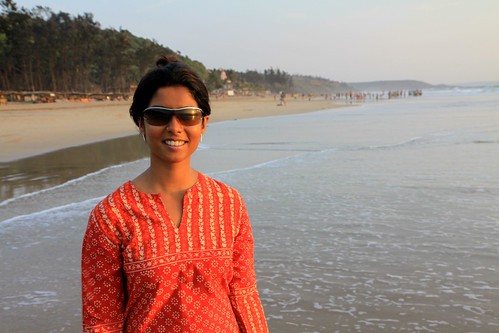 and I indulged ourselves with a massage each . After the previous day’s tiresome journey, this was heaven-sent! Later in the evening, we ventured out to the beach and watched another fabulous sunset along the Konkan Coast! Near the temple many coconut and Bhelpuri vendors line the shore. But the rest of the beach is secluded and gorgeous. North of the temple, we saw some hut accommodations ensconced among palm trees with probably the best sea views ever. These may have been part of the MTDC Resort or some other hotel. Either way, we were envious !

Just like at Harihareshwar, we couldn’t get reservations at the MTDC resort for the weekend . So today we checked out of there and checked into Abhishek Beach Resort, which is a little away from the temple area. We stayed indoors pretty much the entire day to relax and also catch up on our website, which we couldn’t update for the past few days.

Tomorrow we plan to head out to Kolhapur and the only option seems to be a 5hr ride on an 8am State Transport bus out of Ganpatipule . It’s going to be another long, tiring day! How we miss having a car right now ¦