The guidebooks haven’t been very useful when it comes to exploring the Konkan coast. From them, I could only find Alibag, Murud and Ganpathiphule listed as places to visit. But our friend Kiran gave us some suggestions on what to visit and where. He listed quite a few destinations in between these towns and beyond (close to the Goa border). From this list Madhu figured that our next stop should be Harihareshwar. MTDC (Maharashtra Tourism Development Corp.) has a sea-facing resort here and it had rave reviews online. So we knew this would be a good place to stop by. 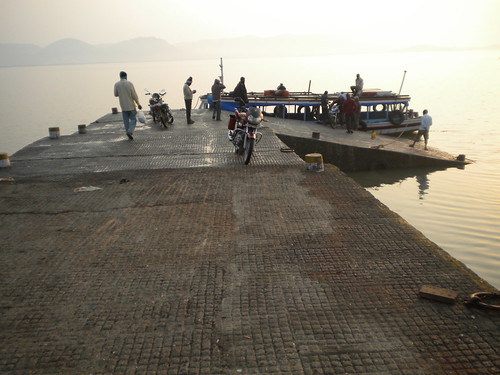 But as expected there were no direct connections to here. The problem is that there is no direct coastal route; the main highway is more inland. Even though the distance between Murud and Harihareshwar is just about 60kms as the crow flies, the driving distance is around 120kms, which is quite circuitous. We tried to book a car to take us there but even they felt that it was both a waste of time and money to drive the distance. Instead they told us to go to the nearest port, take a launch across the bay and then take shared-autos to our destination. This sounded deliciously adventurous! Moreover, we had no options!

Today morning we woke up early, checked out of our hotel around 7:30am and took an auto to Agardanda, which is about 10kms away, for the launch across the bay to Dighi port. We could have got a boat from Rajpuri port (same place from where we took a boat to Janjira Fort) as well, especially since it’s closer at 5kms. But the launch from there wouldn’t leave until 9am, while the one from Agardanda left at 8am. The road to there was through some rural hamlets and absolutely gorgeous! We also passed a huge construction site where teams from abroad were working on building a new port in the area – cool!

The launch left Agardanda at 8am sharp and it was a fun 15-minute ride. Apart from us, there were just a few other locals along with 3 motorbikes , being ferried across! We were told to take ‘Duggis’ (aka ‘Dum Dums’) or six-seater shared-autos from Dighi port to our destination. We knew we wouldn’t get one to take us directly to Harihareshwar and we were right; it took 3 of them to get us there . The first one was from Dighi Port to Borli (12kms), then Borli to Shrivardhan (16kms) and finally Shrivardhan to Harihareshwar (18kms). It was so much fun and sooo cheap ! They charge a rupee for each kilometer, so we paid Rs.112 in total . And thankfully, this time we didn’t have to share any of the rides with fisherwomen and their smelly baskets !

The third Duggi dropped us right outside the temple that Harihareshwar is most famous for. This is 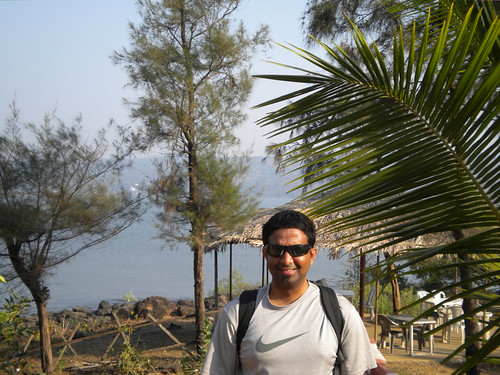 also the main part of town. From here we asked for directions to MTDC’s resort and walked for nearly 20 minutes, slightly uphill, in the heat; it was quite tiring especially with our huge backpacks! We wanted to stay 2 nights here but when we got to the resort we got booking for just 1 night; apparently Saturdays are their busiest days. We took what we got.

After checking in, we had tea and snacks in an absolutely breathtaking setting: under a shaded shack facing the gorgeous sea and mountains! Unbelievably beautiful! The shacks were built atop a low, rocky cliff with fantastic views of a secluded beach and the calm sea. Since we were the only ones around, we spent a leisurely hour here – it was incredible! The hotel manager had warned us that by evening and early tomorrow, the place would be crowded with weekend revelers – so we were glad to have this time and space now.

Back in our room we realized that our cell-phones had no network here and our wireless internet card didn’t work either, making it official that Harihareshwar is truly the most remote village we’ve stayed at . For lunch we walked out to the main village road and ate in one of the many homes that run restaurants on their front or back porches – it was a fantastic home-made meal. 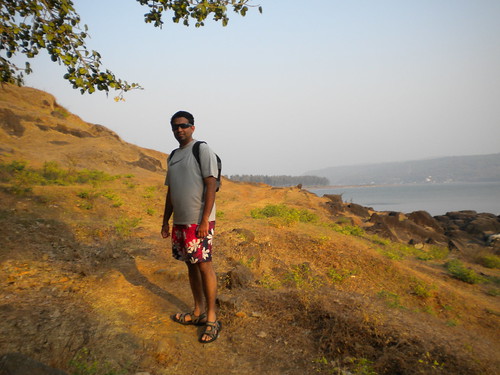 At around 4pm we sauntered back to the lovely sea-side cafeteria for tea before walking along the side of a muddy cliff to get to the beach – there’s a road access too, but we found that only later. And it is a spectacular beach! For almost an hour we were the only ones there – it was heavenly! Later we were joined by another family who played in the water for a while and then sat around quietly and watched the sunset along with us. We’ve realized that Maharashrian families love traveling in large groups but are usually very well-behaved and seem to respect the sanctity of the place a lot more than our north-Indian friends . 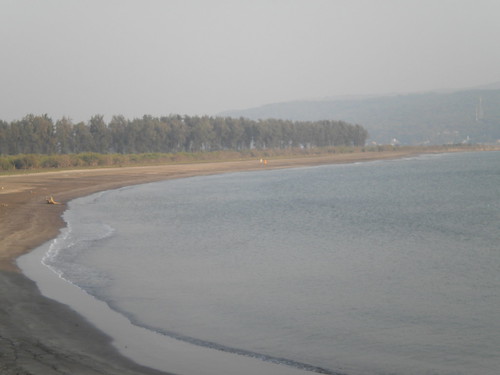 Harihareshwar is known as the Dakshin Kashi (Southern Kashi) because of a Shiva temple established at its shore in the early 20th century. And it is this temple that brought the town into prominence attracting thousands of devotees from across the state. The lodging and restaurant facilities are mainly geared towards these visitors and are therefore not very commercial, which is very refreshing. The only downside to this is that almost all the signboards, menus, etc. are written in Marathi. Since I have studied in Bombay where Marathi was a compulsory 3rd language until the 8th grade, I can read and understand most of it quite well; we can also speak it to a certain extent. But this is definitely not conducive to outside travelers. The Konkan coast is littered with fantastic beaches and I’m sure beach-loving foreign tourists would find heaven here. With a little support from MTDC this region can flourish as much as Kerala and Goa have.

We intend to stay at least 2 more nights here ¦.