Today we decided to explore Harihareshwar’s famous temple, which is located at the end of the main road that runs into town. Although it’s quite famous in the area, there is no information in the guidebooks regarding this town or the temple. From a couple of pictures of the temple that were posted on signboards in town, we knew that it wasn’t architecturally special. But since we were here, there was no way we would leave without visiting it. So after a fabulous breakfast of Kanda Pohe and Vada Pav , we walked to it. 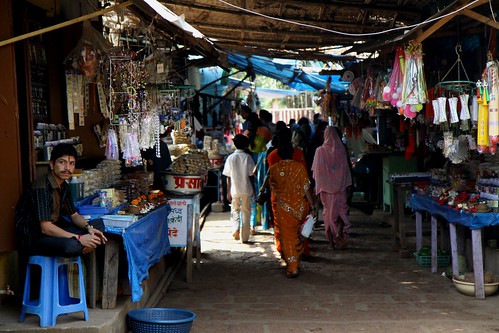 leads up to the temple. It is located against a hill at the corner of a beach – quite a picturesque location! It consists of 2 mandapas, one dedicated to Kal Bhairava and the other to Harihareshwar, both being different names/forms of Lord Shiva. A sign in Marathi suggested that devotees should pay respects at the Kal Bhairava mandapa before heading to the other one. But we didn’t see this , so we walked into the Harihareshwar mandapa first. It was not crowded and a friendly priest guided us into the inner sanctum, which housed a small, stone lingam with a copper, serpent hood over it. It was a very peaceful darshan. But there was a long line for the darshan of Kal Bhairava and a couple of priests policed it fiercely. We had to wait for about 15 minutes to get close to the black, stone idol of Lord Shiva and even then were shooed off by the priests quickly in order to keep the line moving.

Behind the Kal Bhairava mandapa, a sign read ‘Pradakshina Marg‘ and pointed to a flight of stone 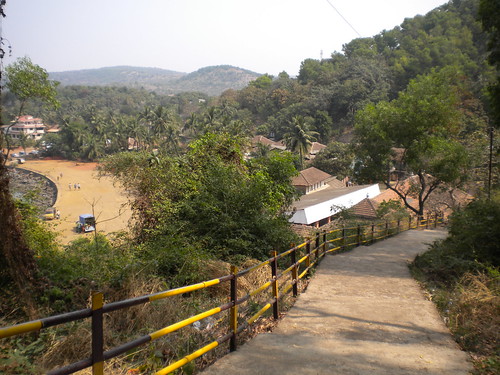 steps that climbed into the adjoining hill. Pradakshina is the term used to describe the circular path that the devotees take around the deity, always keeping their right shoulder towards it. But the stone steps behind the Harihareshwar temple seemed to lead away from it, which we found quite strange. But it looked interesting enough, so we started climbing it. Half way up we realized that we were climbing barefoot while most others had their footwear on. For one, we were in no mood to climb back down, wear our shoes and then climb back up again. Secondly, who does Pradakshina with their shoes on?! So we continued barefoot¦

The stone steps were roughly hewn into the cliff making it a torture for our bare feet. 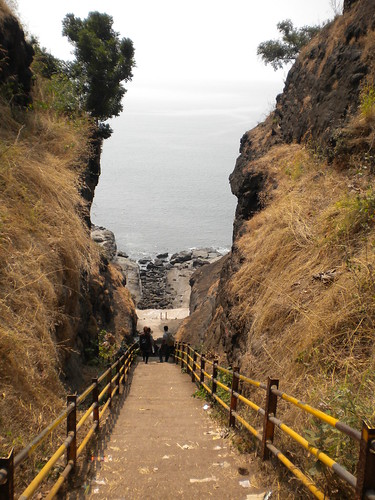 But the views of the shore and the sea kept getting better as we climbed and that kept us going. At the top, the steps abruptly ended and the path turned left. When we got there, the view took our breath away! There were more stone steps but these led steeply down to the rocks and the sea beyond. On either side of the steps were large boulders giving the place a unique look; it was simply fantastic!

There were a couple of signs at the bottom of the steps warning tourists of the dangers of the sea. Everyone was requested to stay away from the rocky edge as the sea was rough and was known to have caused casualties. In spite of this, we saw many people standing or sitting precariously at the edge of the rocks – why tempt fate?! Anyways, Madhu and I were careful and stayed on the broad base of black rock and 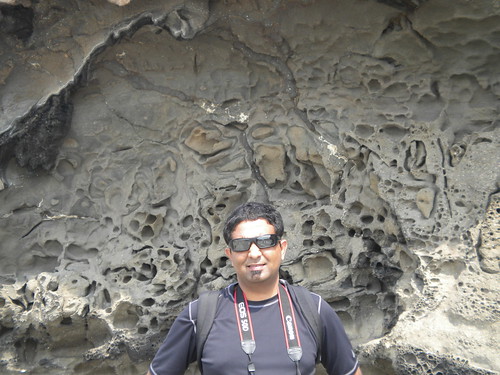 found the landscape to be absolutely beautiful. Small pools of water were collected in the crevasses of the rocks and some even had fish and/or crabs in them. As we continued walking clockwise, to our left was the sea and to our right was the temple. But between the temple and us, was a large overhang of rocks, which were pockmarked with holes caused by erosion over time; it looked unique and wonderful!

The rocks led us out to the beach and from there we could re-enter the temple through a side gate. We had successfully completed the Pradakshina around the temple  and barefoot at that!

Later after another meal of fried fish , we walked back to our hotel for a well-deserved siesta. In the evening we walked to the beach near the MTDC resort and spent a wonderful time gazing out to the sea. This is our last night in Harihareshwar and it has been a truly magical stay. We have had no cell-phone coverage or internet access over the last 3 days, which was a little annoying. But it is this lack of connectivity with the rest of our world that made the stay much more special!

We haven’t had enough of the Konkan coast yet! So tomorrow we plan to head to another beach-town called Dapoli. Can’t wait to see what it has in store for us, apart from no connectivity, that is!