The original plan was to stop at Guhagar, which lies between Dapoli and Ganpatipule. So today morning, around 9am, we took an auto to the town of Dapoli and then a shared jeep to the port of Dabhol, remembered most for the infamous Enron Power Plant. The jeep, with 2 rows of seating in the middle and bench seats at the back, should have ideally accommodated about 11 (1 + 3 + 3 + 4) passengers plus the driver but at one point, there were 17 (3 + 4 + 4 + 6) of us plus the driver  LOL.

From Dabhol, we took a boat to the port across, called Verdul. And from here, 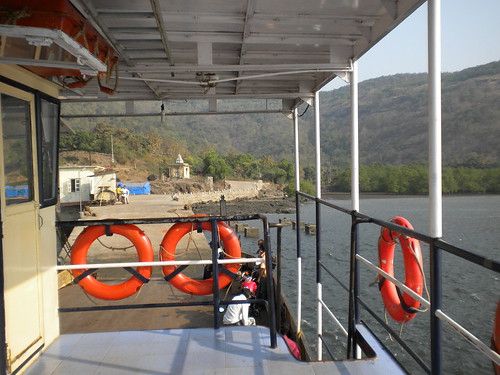 we took a shared-auto (thankfully, just a 4-seater this time ) to Guhagar. When we got there, I was quite happy that we had managed to get there quickly and without any delays; I should have bit my tongue right then¦

The auto dropped us in the heart of town. We figured that just like our stay in Dapoli we could get another auto to take us to Guhagar’s beach resorts. But when we asked around, we were told that the beach is within walking distance and there was no need for an auto, so we dragged ourselves and our backpacks there. It was a beautiful beach – a long and wide sandy stretch. The waters here looked bluer than what we had seen north. There were many Bhelpuri stalls lined up at the shore, so we sat under one of their shaded shacks for a break. We realized that there were no beach resorts here, which was a little disappointing. In his original email to us on the Konkan Coast, our friend Kiran had suggested a hotel in Guhagar as well, but since we didn’t have internet access over the last few days, we didn’t know where to go . Back in town we tried asking around but none of the locals knew of any resort in the area. They pointed us to a couple of lodges but these looked run down and not worth checking out. We found one decent-looking place but even that didn’t seem nice enough. So, with no other options, we decided to head off to Ganpatipule directly.

From Guhagar, we took a State Transport bus to Chiplun. This was probably the most tiring 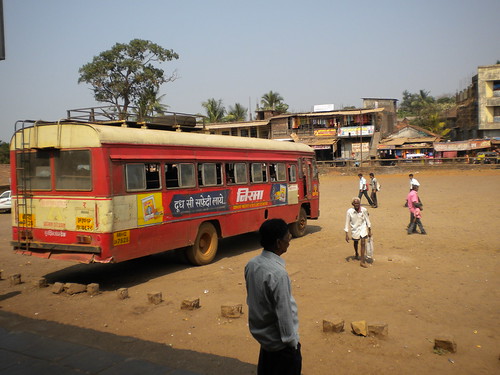 ride we’ve ever had using public transport . The afternoon heat bore down at us and the one hour ride seemed never-ending. At Chiplun, we took another State Transport bus, a Ratnagiri-bound one, to a place called Nivali; it took 2 hours. Ganpatipule is 32kms from here. By this time, Madhu and I were completely exhausted. Other than Bhelpuri, we hadn’t had anything to eat since morning and were famished. So we took a break at a nearby restaurant, ate a proper meal and then boarded the third State Transport bus of the day to our final destination. And, thank God for small mercies, it dropped us off right outside the MTDC resort at Ganpathiphule! We had been on the road for nearly 8 hours !

After such a tiring day, we could only laze the rest of the evening away¦