Murud is just about 50km south of Alibag and the konkan coast route connecting these two towns is absolutely gorgeous! However, apart from State Transport buses there are hardly any other options for traveling between them. So yesterday we took an auto from Alibag’s auto-stand and spent the next hour gazing out at the fantastic scenery to Murud. En route, we passed Kashid beach, which is 17km north of Murud and looked heavenly! The guide books had mentioned this beach to be one of the nicest here. If we had been driving by in our own car, we would have definitely stopped for a while. But yesterday we had to just watch it go by !

As usual, we hadn’t booked any place to stay in advance. We were keen on trying some home-stays and had found one online that looked quite nice and reasonably priced. But when we called them, they said that the rooms were closed for maintenance. So we decided to simply get to Murud and search in person. Unfortunately, this took longer than we expected . There are not many hotels and out of a couple that we checked out, one looked quite run-down and the other was too expensive. There were a couple of home-stays as well but they were a little too basic for our taste. Eventually, we found a hotel, Nishijeet Palace, which is brand new with parts of it still under construction. But the rooms are really nice and within our budget, so we were relieved to have found it.

After checking in, lunch and a brief siesta, we headed out to Murud’s most famous attraction (apart from the beaches, of course!), the Janjira Fort. It is an imposing, island fortress built 500m off 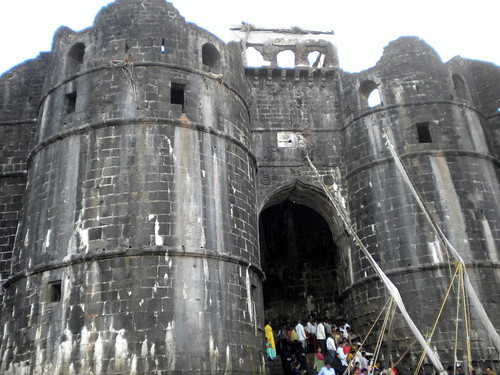 the Konkan coast 5kms south of Murud. The only way to visit is by boats, which ply from 8am to 6pm daily from the closest port, Rajpuri. For some reason, I had always believed that this fort was built and commanded by Shivaji. However, from the guidebooks I learnt that it was built in the 12th century (much before Shivaji’s time) by the Siddis, descendants of traders from the Horn of Africa. They apparently settled here and made a living through piracy in the seas. The fort was impregnable for centuries and withstood many wars against the Siddis; even Shivaji made several attempts to win it but failed. Eventually, his son, Sambhaji Rao, is said to have gained control over it in the 17th century. Today, the 12m high walls still stand tall and strong but most of the palaces and mosques built by the Siddis have turned to rubble.

When we got to Rajpuri it was around 4:30pm. We figured that we had ample time to explore the fort. Unfortunately, many local schools decided to visit Janjira Fort at the same time as well . 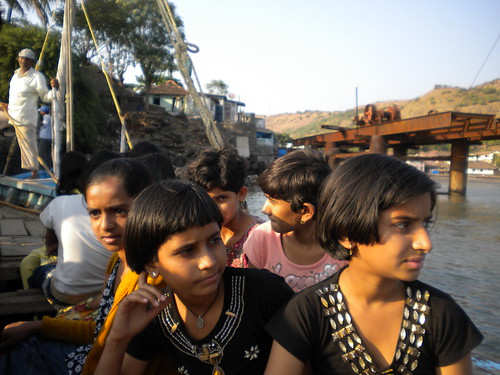 There was a huge line of students waiting to board the boats and we waited impatiently behind them. They were a raucous bunch of teenaged boys; I began to wonder if we should come back another day. To make matters worse, behind us another line of around 100 students, 8 to 10 year olds, formed a line behind us. We realized that we are going to be completely surrounded by kids at the fort . Thankfully, we boarded the boat along with little girls and not with the loud, crazy boys. The boats didn’t look very sturdy; didn’t want to risk being capsized by unruly children . To our relief the girls were all super-sweet and well-behaved. They sang and hailed Shivaji throughout the 10-minute journey across to the fort. It was a beautiful ride with the evening sun, a lovely breeze, the gentle bobbing of the boat and the girls’ songs .

The entrance to the fort is superbly hidden between 2 curved walls of the fort. 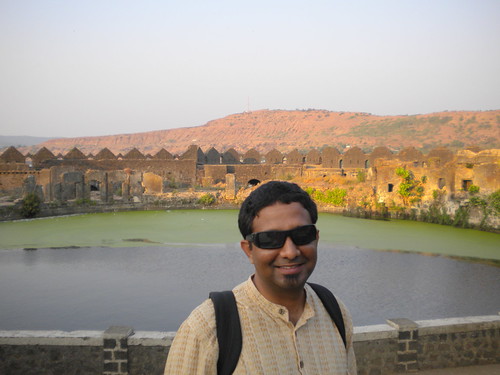 We couldn’t see it until the boat got close enough. We saw many canons peering out of the roof and it made the place look quite formidable. The boatmen told us that we had one hour to explore the fort before the last boat back, which leaves at 6pm. At the fort we found more children and quite a few families as well. I have never seen so many crowds at any Indian monument other than the Taj Mahal. It was a little annoying ! The fort is unbelievably beautiful, the ruins giving it a very haunted, eerie feel. It would have been an awesome place to sit and enjoy the sea-views in solitude. But that was not to be! We walked around along with the others and tried our best to enjoy the place. In spite of the noise and cacophony of the kids, it was a great place to explore. A large, sweet-water tank in the middle of the fort looked especially wonderful. The ruins of arched walls around it must have looked fantastic back in the day. But we were appalled to see a huge chunk of trash (plastic bottles) lining the sides of the tank. How can people have the heart to trash such a beautiful place!? How can the govt not clean it up!? Heartbreaking!

One hour went by quickly. I wish we had arrived sooner or the kids hadn’t showed up. Oh well! We boarded one of the last boats back to the port, again accompanied by at least 50 kids . At Rajpuri we hailed a shared-auto and rode to Murud along with a few locals including a fisher-woman; was a bit of a smelly ride . We alighted just as the auto entered town and walked back to our hotel along the main street that runs parallel to the beach. Unlike Alibag, Murud is still a small fishing village and has retained its rural charm. It reminded us of Kerala; the narrow roads and foliage looked quite similar!

We had decided to spend today lazing and exploring Murud’s beach. But we couldn’t get Kashid beach out of our heads, so we decided head back there . We hired an auto, which would take us there, wait and bring us back for Rs.300 – a good deal for the 35kms round trip. On the way, our auto-driver pointed out the Ahmedganj Palace that sits at the edge of a cliff just outside town, overlooking the sea – a fabulous location. It was built by the Siddi family and has stayed with them since. Today it is partially in ruins as the family doesn’t live there anymore nor does it allow visitors. The auto-driver said that the locals were hoping it would either get converted into a hotel or a museum with ticketed entry to boost tourism in Murud. A Hindi film called Purani Haveli (sounds like a Ramsay production ) was filmed here years ago and that was the only time people got a close look at the place. It looked magnificent from the outside – we would have definitely paid to get a peek within.

At 11am in the morning, Kashid beach was quite secluded, except for a couple of families, and 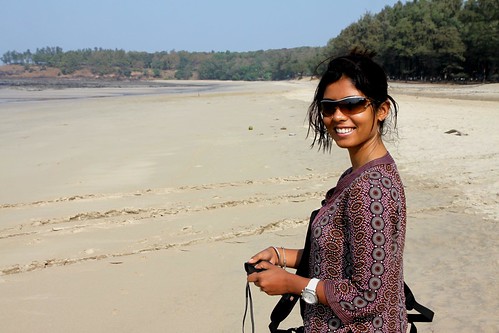 looked absolutely stunning! Between the beach and the road, many shacks were set up with hammocks to laze in – heavenly! We walked along the shore and loved the cool sea-breeze under the warm sun! Later we sipped chai at one of the shacks and enjoyed the lovely view. It was a fantastic place to chill; a true taste of the Konkan Coast. Compared to this, Alibag’s beach is hardly worth a mention.

We got back to our hotel after lunch and rested the afternoon away. At around 4pm we walked out to Murud beach, access to which is just across the street from our hotel. What a lovely beach this one is too! It must be at least a 2km stretch of sand. There was hardly anybody around at that time. We walked the entire length and back enjoying the relative solitude. As we were walking, a stray dog took a liking to us and started walking along . 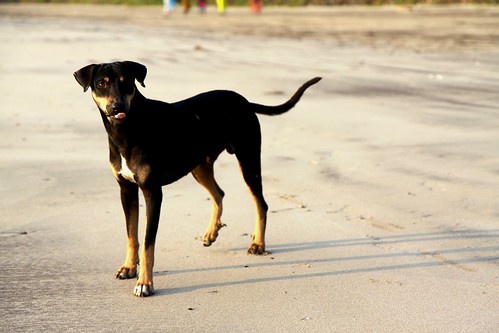 He was so sweet; wagged his tail every time we turned around to look at him. Madhu went to a nearby beach shack and bought a couple of packets of biscuits for him. He opened one pack and dropped the biscuits on one of the steps that led up to the shack. The dog sniffed them but didn’t eat them immediately. When we turned around to walk away, he quickly gulped them down and started following us again . Eventually we opened the second pack and offered those biscuits to him as well. This time he looked like he would prefer walking with us instead of eating the biscuits. But when we ignored him a bit, he turned around to eat. Later we sat on some stone steps amidst a few people and saw the dog loitering around the beach looking lost. I’d like to think that he was looking for us .

As the evening wore on, several groups of boys showed up to play cricket on the sand. 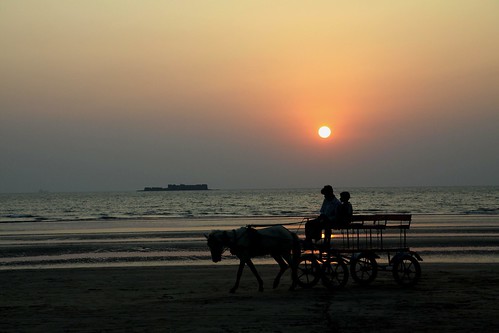 A few families frolicked in the waters and rode horse carriages around the beach. Yet the place didn’t seem crowded. We sat until sunset chatting with a young boy whose 6 year-old horse Raja was the finest looking one around. He did good business as several families were thrilled to get a chance to ride such a tall, regal looking horse. Apparently, the horse was brought from Matheran where it had been ill-treated and was quite sick. The young boy and his uncle nursed the horse back to life and today it looks healthy and well. A sweet story !

Our Murud stop has been absolutely refreshing and romantic ! After Alibag, we didn’t have many expectations from Maharashtra’s coastline. But this has been a complete eye-opener. Now we are determined to see more of it. We researched online and found many more villages along the coast that are supposed to be heavenly. But, unfortunately, there’s no easy way to get to them without a car . So we need to figure something out. Lets see ¦