We booked the same taxi that we had taken to tour Aurangabad and Ellora, to take us to Ajanta Caves as well. We checked out of our hotel, loaded the car with our stuff and headed off around 9am. The plan was to tour Ajanta Caves and then get the taxi to drop us off at Madhu’s cousin’s home in Jalna. Two days ago we had met him for the first time in 10 years and now we plan to spend some more quality time with him. This has been the best part of our time off – we have been able to reconnect with family like never before!

Ajanta Caves is about 110kms NE of Aurangabad. It took us 2.5 hrs to get there and surprisingly, the ride 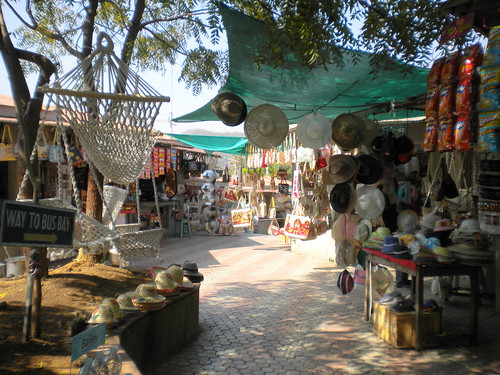 felt long and tiring. It would have surely been worse if we had taken the bus tour from MTDC! We parked in the parking lot and walked thru an ‘Amenities Area’ where many souvenir stores and food stalls lined the path leading to a bus stand. Apparently, visitors are no longer allowed to drive up the hill to the caves as the pollution caused by the traffic was damaging the fragile Ajanta paintings. Buses have been provided by the ASI for the 4km climb up and back. These are available every 10 minutes or so – some are air-conditioned while others are not with fares varying accordingly. Before boarding one of these, we decided to build up some energy by snacking at one of the food stalls.

Around 11am we boarded the next available bus to the caves. Up the hill, there’s a MTDC 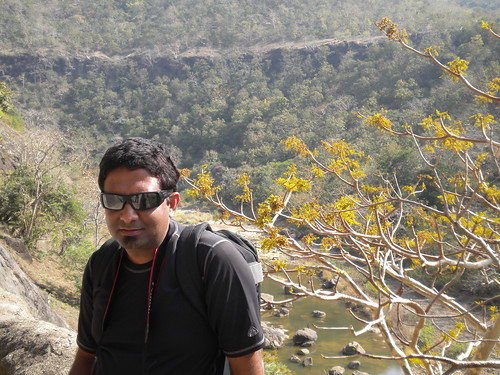 restaurant and hotel where the bus dropped us off. This used to be where the visitors could drive up to and park, back in the day. From here, a short flight of steep stone steps lead up to the caves. When we got to the top, we were immediately impressed by the fantastic scenery before us! The caves were carved into a horse-shoe shaped cliff-side and we stood at its eastern end. To the left of us was another small hillock, with a rocky valley and stream in between – the entire setting was beautiful!

Ajanta has about 30 caves dating from 2nd century BC until 5thcentury AD, when they were abandoned. They were discovered in the early 19th 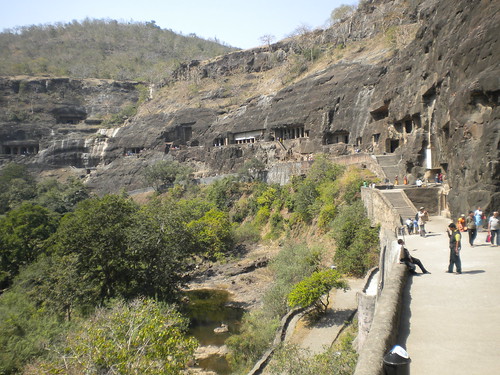 century by a British hunting party and later granted a UNESCO World Heritage Site status in 1983. As a child I remember visiting these caves as part of a large tour (probably one organized by MTDC) and finding the caves, and the crowd in them, to be a little too claustrophobic. Strangely, I didn’t remember much about the caves themselves; I only remember feeling quite miserable in the heat and crowds. So I came here without any expectations whatsoever, which was good, ‘coz Ajanta Caves turned out to be the highlight of our Maharashtra tour¦

In Ellora we had found a guide near the ticket counter itself, but here, because of the steep climb up, guides can be found only near the entrance of Cave 1, the first cave that we approached. However, we couldn’t find a guide for quite a while as they were all already engaged. Finally, a shabbily dressed, elderly gentleman with hennaed hair walked up to us. He was an official Ajanta Caves guide and offered to show us around for Rs.600. This is the standard rate for both Ajanta and Ellora, so it was an expected amount. But before we could say yes or no, he said that it would be better if we could share the tour with some other visitors, which would bring our cost down. Madhu and I considered this but felt that a private tour, like the one we had in Ellora, would suit us best. However, the guide suddenly walked away and entered Cave 1. We had no options but to follow suit. Inside we found him talking to a Caucasian male and an Asian lady offering to guide them as well. When they agreed, he said he would charge each couple Rs.400 since we were sharing his services. Madhu and I shrugged and agreed as well; there were no other guides around and we didn’t want to waste anymore time. This entire dealing, however, left me a little unhappy.

The tour started with Cave 1, which we were already inside. Every inch of this Vihara (monastery), built in the 5th century, was originally painted but today much of it has worn away. Restoration work is still ongoing and they seem to be doing a good job. The painted walls are barricaded so that visitors don’t touch them and cause more damage. Small spotlights softly highlight the important sections of the cave without flooding it with a glare. This gave the place a very museum-like ambiance; we were impressed! Said to be one of the latest caves to be excavated at this site, Cave 1 has Ajanta Caves’ most recognized paintings – that of Padmapani and Vajrapani Bodhisattvas (Buddha’s previous lives). These flank the entrance to the inner sanctum, which enshrines a large image of a preaching, seated Buddha. We later learnt that this sculpture of Buddha is quite famous as it conveys different moods – solemn when seen from the left, joyful from the right and serene when viewed from the front! Unfortunately, we never got to witness this as our guide didn’t point it out to us. 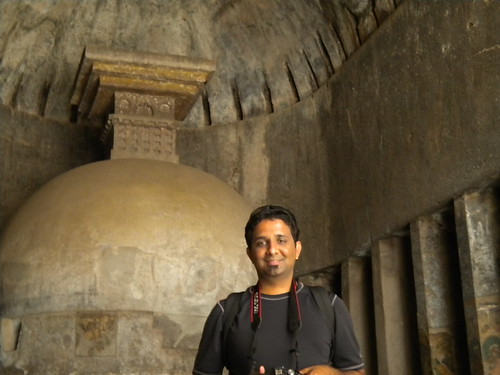 the ceiling and that’s what we remembered most about it. It was also built around the same time as Cave 1, but is much smaller. Caves 9 and 10 are amongst the oldest ones in Ajanta. In fact, Cave 10 is the oldest having been built in the 2nd century BC! Both these caves are prayer halls (Chaitya) and have beautiful Stupas enshrined within them. Caves 16 and 17, which are monasteries, have fantastic paintings and the one I remember the most is that of a tall Buddha image begging for alms from his wife and little son – it was quite beautiful! The ceiling of Cave 17 has a fantastic central mural. Our guide explained that all these were done using natural ingredients as colors. Our last stop with the guide was Cave 19, which had a fantastic entrance with carved figurines flanking the door and a horseshoe shaped window on the top. It is a prayer-hall and is one of the nicest in Ajanta. We were asked to tour Cave 26 on our own as it is similar to 19 except for the reclining statue of the Buddha. So we let go of the guide and headed there on our own.

Cave 26 is at the western end of the cliff and, just as the guide said, is quite similar to Cave 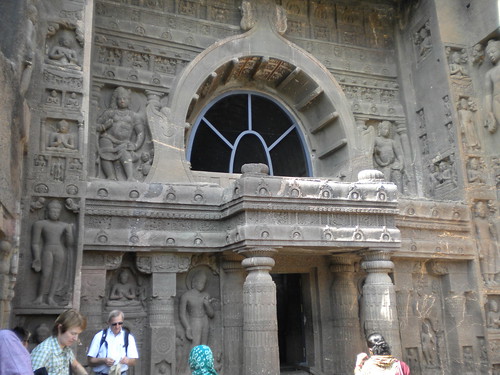 19. Just inside the entrance, to the left, is the lovely statue of the reclining Buddha. This is also known as Buddha attaining Parinirvana, which means ‘ultimate enlightenment upon death’. I loved this sculpture as well as many others that were unique to the cave. Cave 26 was easily one of my favorite ones in Ajanta. Later we worked our way back to Cave 1 and walked thru each and every cave in between. Some of the caves were not complete and it was fascinating to see the process of excavation!

By the time we left Ajanta Caves it was about 3:30pm; we had spent 4 hours touring it! And surprisingly, 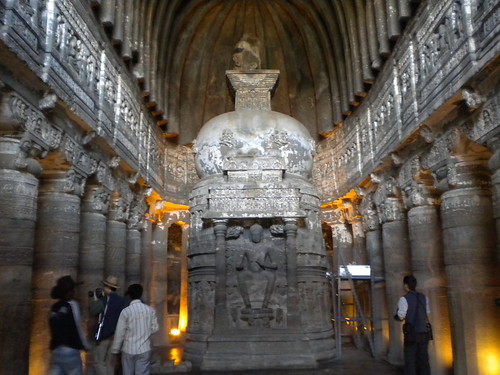 it hadn’t felt that long. Ellora has fantastic temples but Ajanta’s paintings are quite unique and absolutely mesmerizing. So if we were to choose between the two, it would have to be Ajanta Caves. Moreover, the govt seems to be doing a great job restoring and preserving the place. It is said that some Buddhist Japanese trust has donated a lot of money towards the restoration work. And thankfully, the money seems to have been put to good use.

We climbed down the stone steps to the bus stand where a bus was waiting to leave. Since it was completely full, we decided to wait for the next one, which came around in about 10 minutes. As we took our seats, a couple of young Canadian girls took the seats next to us across the aisle. A bunch of Indian boys then boarded the bus, out of which two sat in front of the girls and promptly struck a conversation with them. At first the girls were polite and even smiled warmly when the boys asked if they were married. Then suddenly one of the boys whipped out his camera-phone and asked if he could take a picture of them; the girls firmly refused. But this guy was persistent and kept begging for a picture. Thankfully the girls were quite firm as well and didn’t give in. To our dismay the guy went ahead and clicked a picture without their permission. The poor girls could do nothing but shield their faces and stick out their palms to block the frame. It was SO embarrassing to watch all this. Foreigners, especially women, get way too much unsolicited attention in our country. It’s a wonder that so many women continue to travel alone despite such behavior!

After some tea and snacks at the food stalls near the parking lot, we headed out to Madhu’s cousin’s home in Jalna. We got there around 7pm. After such a long and tiring day it was nice to be in a home and with family. We plan to spend the night here and then, tomorrow, head out to Lonar, which is less than a 100kms from Jalna. But before that, we need some good rest.