Even though the main agenda for the day was a leisurely stop at the famed Sula Winery, we decided to have a more sober start. So we headed out to the Trimbakeshwar temple, which is about 33kms from Nashik. Our pre-booked taxi arrived on time and we left Nashik around 9am in the morning. It was a pleasant ride through the country-side and we had a feeling it was going to be a fun day. Thankfully, we weren’t disappointed!

Built in 1786 by Bajirao Peshwa, the Trimbakeshwar temple is situated in the town of Trimbak. The main attraction of this temple, apart from the gorgeous architecture, is that it’s considered to be the first of the 12 Jyotirlingas in India. Another feature that sets it apart is that the Lingam enshrined within the temple has 3 faces, representing the Hindu Trinity of Gods – Brahma, Vishnu, Maheshwara. I remember visiting this place as a child and had enjoyed it then. That’s why, even though Madhu and I are not religious and have seen far nicer temples, in terms of architecture, I was very keen on visiting Trimbakeshwar; I wish we hadn’t bothered !

The temple is still gorgeous, no doubt! But just like we’ve seen elsewhere, it has lost a little bit of its charm with all the security and chaos that surrounds a popular religious spot. We knew we wouldn’t be allowed to click pictures within the temple but surprisingly we weren’t allowed to take pictures even within the walled courtyard. We joined a smallish queue, which snaked out of the temple onto the compound. The queue was formed within steel barricades to ensure that the crowd was contained in a proper manner. I’ve seen these barricades in other temples too. They are definitely effective but do not particularly have any aesthetic value. Here especially, they looked completely out of place in the beautiful 18th century stone courtyard.

The queue moved along quickly and we entered the temple through a small antechamber, which housed a lovely stone idol of Nandi Bull. From here we entered the Sabha Mandap where steel barricades ensured that the queue moved along the right-hand-side wall and snaked around to the front door of the inner sanctum. The temple ceiling had gorgeous carvings and these stood out in spite of the unsightly wires and lights that hung from them. As we neared the door of the inner sanctum I noticed a couple of security personnel – a woman and a man – prodding the queue to keep moving. Sadly, they were yelling and creating quite a chaos themselves. When I got in front of the inner sanctum and bowed my head to pay my respects, the lady guard touched my shoulder firmly (not really a push) to make me move. I felt really bad about this. I wondered about devout people like my mother who travel from afar to sacred temples like this one only to be pushed around by security personnel without being given even a single, peaceful second to pray in! What would be the point of visiting then! Some pandits sat in a row next to the inner sanctum willing to give devotees a ‘Prasad’ of holy water and Tikka, for a small donation, of course.

Outside the temple compound, a colorful bazaar lines the narrow village streets. We strolled thru this for a while finding nothing interesting or tasteful, fed some cows with grass that was being sold by locals (quite cheap at Rs.5 for a bunch), gave a beggar boy a packet of Bourbon biscuits and then hurried back to our car.

In spite of the not-so-fun temple visit, our spirits weren’t dampened as we realized that it was just 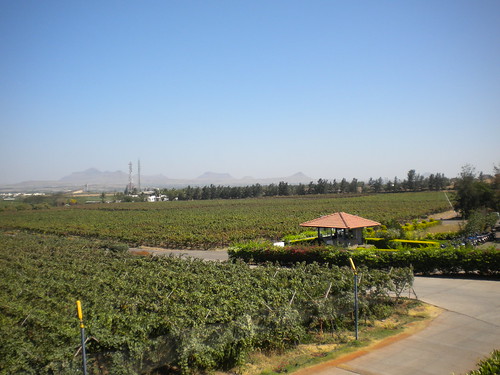 10:30am and we had the whole day ahead of us to tour Sula Winery. We got to it just past 11am when the winery was just about opening and there was no one around except for staff; I guess visitors during the opening hours of a weekday isn’t the norm around here. As we alighted from the car, we were taken in by the wonderful landscape around us. The two-storied structure, which houses a reception area on the lower floor and the tasting room upstairs, is set back from the main entrance of the winery with vineyards flanking the road leading up to it. We walked up to the upper floor and booked ourselves for their first tour of the day (Rs.300 per person), which was at 11:30am and had no other takers.

The tour started at 11:30 sharp and was led by a young Nashik boy, who was quite warm and 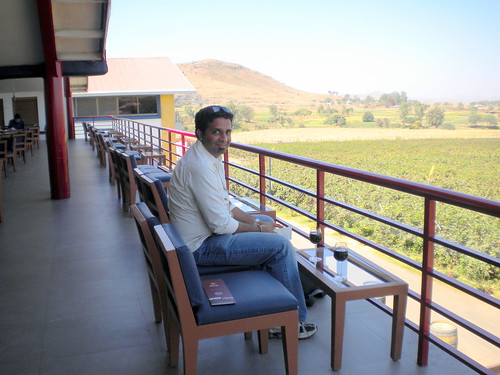 friendly. He started off by giving us a background on Sula and its founder, Rajeev Samant. Back in the US, we had heard about the growing popularity of Sula wines and about Stanford-educated Rajeev. We assumed that Rajeev was from a wealthy business family, which decided to tap into India’s booming economy with the introduction of locally-produced wine. We figured that Rajeev must have come to California exclusively to study wine-making and its intricacies. However, to our utter surprise, we learnt that he was a MBA-Economics grad from Stanford and had even worked at Oracle’s finance dept for a while. His father owned 20 acres of farmland in Nashik and it was just this piece of property and an entrepreneurial inclination that got him to start India’s first winery in 1999; simply amazing! Of course, his timing couldn’t have been better – his wine is affordable and India’s youth, brimming with the burgeoning economy, lapped it up happily! Sula proudly states that they don’t bother with exports as the domestic market is enough to keep them going.

We were taken out to see the vineyard, from which hung thousands of grapes. Apparently, 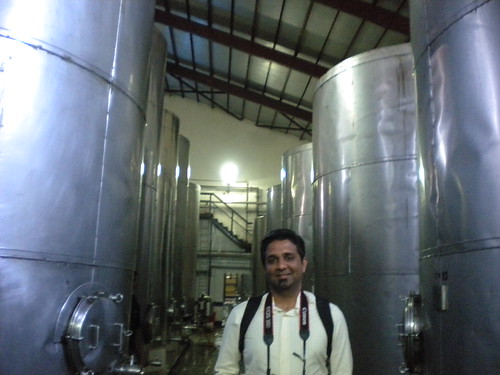 harvesting would soon begin in a month as, unlike California, Nashik receives a lot of sun even during the winter season. We were then taken to a structure adjoining the one we were in – this is where the grapes are sorted, crushed and fermented to make wine. The wines are aged in huge steel barrels, which is quite unlike the wines of California that are aged in French-Oak barrels. This is mainly because French Oak is not locally available in India and importing them would drive the cost of wine-making north. Since the Indian market is not yet ready to spend thousands of rupees on a single bottle of wine, it was decided to produce ‘young’ wines that are not aged in the true sense of wine-making. Therefore, most Indian wines are ready for consumption as soon as they hit the market and cannot be stored like the aged wines from abroad.

From the tasting room upstairs, we could gawk at Sula’s bottling facility through large glass windows. 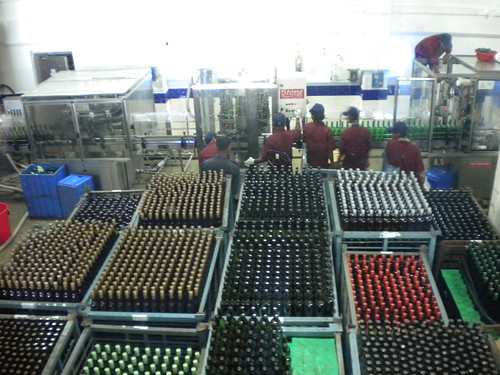 It was fascinating to see machines bottle about 8 bottles (or was it 10?) at a time and move them through a conveyor belt for sealing and labeling. Later we were able to taste 6 of Sula’s popular wines and especially loved their Dindori Reserve Shiraz. Then we bought a glass of wine each, ordered a platter of cold cuts & cheese and settled into a couple of seats that overlooked the lovely landscape before us; it was absolutely heavenly! For lunch, we walked across to their onsite restaurants: Kareems serving fabulous Indian kebabs and Little Italy serving, obviously, Italian food. We, of course, opted for Indian; we haven’t yet started craving non-Indian food of which we were equally fond of in the US.

After a sumptuous lunch of grilled prawns and biryani, accompanied by more Sula wine, we walked back to the tasting room and bought a couple of bottles of their dessert wine as gifts for family. And then, reluctantly, around 4pm, we left! It had been a glorious end to our Maharashtra tour! Nashik, with its temples, caves, wineries and mild climate is a great place to explore and should definitely be promoted more aggressively as one of Maharashtra’s must-stop-by destination!

Today, we checked out of Ginger Hotel, took an auto to Nashik’s private taxi stand and then a shared taxi for Rs.375 per person to Thane; it was quite a comfortable ride and quick, as compared to bus rides, which are much slower. We intend to chill at home for a while before deciding on our next course of action!