Past the Konkan region, Maharashtra’s coastline extends further south to the Malvan region, also known as the Malvan Coast. Our initial plan was to go here as well to visit the beach towns of Malvan, Tarkarli and Vengurla. But by the time we got to Ganapatipule, we had started to tire a bit of beaches, if that’s possible at all . We were beginning to miss being in crowded, urban cities. Moreover, getting to Malvan would have been a trek, being almost 300km away. Since it’s quite close to the Goa border, we decided to skip it for now and cover it whenever we head down to visit Goa. So on Saturday morning, we took an 8am Kolhapur-bound bus from Ganapatipule’s State Transport bus-stand.

Kolhapur is just about 156kms SE from Ganapatipule but the State Transport bus took nearly 6 hours to cover this distance . The bus first headed to Ratnagiri and then retraced about 20kms heading back towards Kolhapur, making way too many stops in between. The hilly terrain with numerous Ghats didn’t help matters either. In fact, it’s probably because of this terrain that there are no rail connections between Ratnagiri and Kolhapur. So we endured the long, bumpy journey patiently and finally got to Kolhapur at 2pm. We checked into the first hotel we found as we were too tired to go any further. Thankfully, it turned out to be a plush one and helped us relax and rejuvenate completely after the long haul.

While we’ve been on the road, we’ve rarely paid attention to dates or days, except for minding weekends when popular destinations tend to get overcrowded. So February 14 took us by surprise when we woke up to it yesterday morning and found ourselves in Kolhapur, a town not really known for its romantic quotient ! But we’re not really complaining. This whole trip has been and is a celebration of sorts, so we didn’t feel the need to treat February 14 any differently ! Happy Valentines Day!

Kolhapur’s main attraction is the 7th century Mahalakshmi temple constructed by the Chalukya dynasty. It enshrines an idol of Amba Bai or Mother Goddes and is considered to be one of the 6 sacred sites in India dedicated to Goddess Shakti. This makes it hugely popular in the pilgrim circuit and I saw a glimpse of its popularity when we visited the temple yesterday morning. We entered or rather tried to enter the temple through its southern entrance but were stopped at the gate by a seated security lady. She wanted us to leave our bags – Madhu’s camera bag and my daypack – at the gate before entering. We just couldn’t do that; Madhu’s camera is too precious to be left around unguarded while my daypack had my wallet and point-and-shoot camera as well. So we decided to take turns entering the temple. I went in first as Madhu waited outside with both bags. This is one time where a car would have been handy. Oh well!

The temple complex was quite crowded and a long queue snaked out of the main mandap to its western entrance gate and beyond! It didn’t look like it was moving along quickly either so I didn’t bother joining the queue. Instead I walked past it around the complex, clockwise, admiring the lovely, black stone carvings on the outer walls of the temple. I was able to enter the sabha mandap or outer hall of the temple where there was no queue. From here I caught a glimpse of the famed, black idol of Amba Bai; it was absolutely gorgeous, adorned with tons of jewelry and a lovely green sari. There was a huge rush of humanity in the main mandap as they pushed and strained to get a good darshan and pay their respects. Content with my brief but stress-less darshan, I turned around to pay my respects to a fabulous idol of Lord Ganesha, who seemed to be getting a fair share of the attention as well.

The innards of the temple have beautiful columns and carvings just as the outer walls. But the shikharas atop the mandaps are newly built and look totally incongruous to the rest of the temple. They are white-washed, garish-looking outcrops that completely ruin the look of the temple . I guess this is what happens when such monuments are not brought under the protection and maintenance of the Archaeological Survey of India!

As I walked around, I noticed several foreign visitors walking around with daypacks as big as or larger than mine – why were they allowed to carry it in?! So unfair!

The temple is enclosed within a walled compound, which is lined with stalls selling pooja items and stone platforms where people could sit awhile. In quieter moments this place must surely feel quite special but at that time it couldn’t have been more chaotic; I simply hurried out of there. Madhu didn’t bother entering the temple once he heard of the crowds.

The guide books had mentioned that Kolhapur’s Chhattrapati Shahu Museum is worth visiting for its eclectic collection. So we bid adieu to Mahalakshmi temple and headed out to the museum in an auto. I must mention here that engaging autos in Maharashtra has been extremely hassle-free so far. Where the meter was not used, they quoted reasonable rates and never tried to fleece us. And then cities like Kolhapur and Mumbai have metered autos, which make it even more convenient. In the north we’ve always had to waste our time and energy, not to forget money, haggling over the rate; it was quite frustrating! 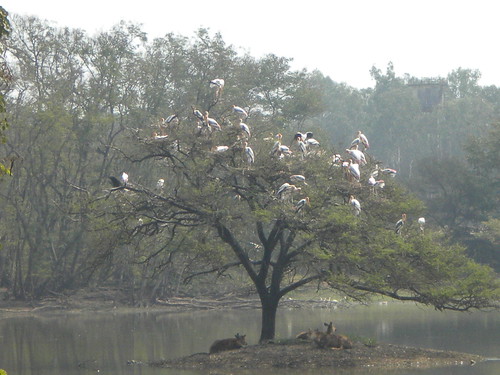 royal family still live on the upper floors. It was commissioned by its namesake, the then ruler of Kolhapur, and designed and built by a European architect, Charles Mant in 1884. It is located a bit away from the old quarters of town, built on a large piece of land, which also encloses a lake bordered by a sad-looking animal enclosure. There were several spotted deer and an Emu as well in this enclosure; they all looked terribly sad to me . The lake hosts many birds including white cranes, which was surprising!

The facade of the palace is quite impressive! Set in the midst of green lawns, it has a distinct European touch to it. On entrance, we were asked to remove our shoes outside and were also strictly prohibited from 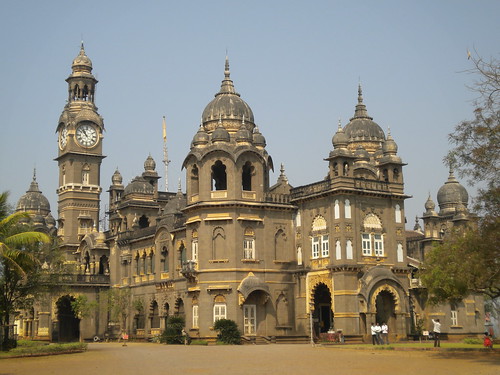 taking any photographs inside . This pissed us off then but, we later realized that there wasn’t much in the palace worth photographing anyway. The entry foyer has a couple of large portraits of the Maharaja mounted on a horse. They seem to be gathering dust and weren’t even hung properly. This itself warned us of what must lay ahead! The whole palace, or at least the ground floor, has a very dusty, musty feel to it. It’s poorly maintained and looks largely ignored. The furniture on display didn’t look unique or special. The Maharaja’s large collection of stuffed animal skins, including those of 6 adult tigers and 4 cubs, was extremely disturbing. So was a collection of animal parts, such as hooves, teeth and tusks used as lamp stands or ashtray holders or some such stuff – absolutely BIZARRE! We have seen world-class Indian palaces with beautifully maintained interiors like the Gaekwad Palace of Baroda and the Scindia Palace of Gwalior; they were totally worth a visit. This museum is definitely not worth a visit and shouldn’t even have been mentioned in the guidebooks.

Kolhapur’s kings had moved residence here after its completion and it is, therefore, 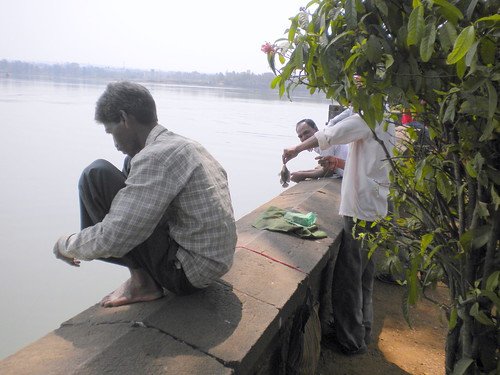 known as the ‘New Palace’. The old palace, from where they moved, is closer to the older parts of town. One of the staff members at the new palace said that the old one is also worth a visit. Lord knows why we listened to him, but we did and took an auto back to town. The old palace is also located on the banks of a large lake where boating is offered to visitors. We walked up to the entrance gate of the palace and found it to be locked. When we asked around, we found that it has been converted into a 5-star hotel and is, obviously, not open to the public for tours! We were truly disappointed by now. We watched a couple of men sitting on a wall at the edge of the lake and fishing – they were reeling in fishes by the dozen and it was fascinating to watch. This was probably the highlight of our day¦

Kolhapur is quite famous for its leather chappals. On our way to the old palace, we had passed a street 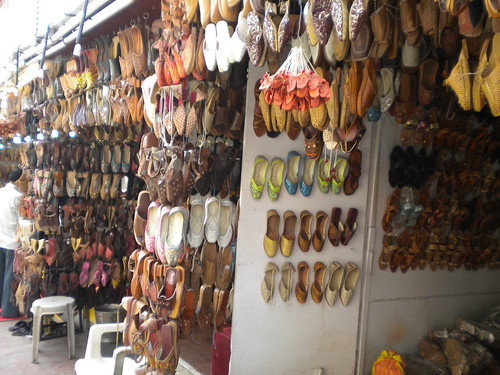 that was lined by many chappal stores so we thought that it might be worth checking out; we didn’t want to give up on Kolhapur easily . So we took another auto and it dropped us off at one end of the chappal street from where we walked up, window-shopping. The chappals looked quite interesting as they came in varied designs, especially the ones for women. I didn’t bother trying anything on as I’ve owned a pair before. Although, nice to look at, these were not particularly kind to the feet. In fact, Kolhapuri chappals are known to cause blisters till they are completely broken into, which takes quite a bit of wearing. So I had no intention of buying a pair right now; while traveling, comfortable shoes, no matter how ugly (which Madhu swears mine are ) are of utmost importance!

The street, though lined with chappal stores on either side, had no particular charm. We soon got tired of staring at all the leather. The afternoon heat was wearing down on us too so we gave up and decided to head back to the hotel. Our Valentine’s day out in Kolhapur had turned out to be quite boring .

We had planned on staying one more day in Kolhapur to visit Panhala Fort, which is about 20kms away. But after such a disastrous day in the city, we decided to give up on it completely and move on. Logically, the next stop from here should have been Pune but on Saturday, February 13, a bomb blast rocked Pune in the evening ! The blast occurred at the German Bakery, Pune’s most popular tourist-haunt. Madhu who spent 4 years in Pune, studying engineering, always talked of German Bakery as a great place to hang out in the evenings. The news of the blast devastated us and we knew that there would be no point visiting the city when it was under so much turmoil. So we now plan to head out to Aurangabad instead…

Deluxe, sleeper buses leave for Aunrangabad from Kolhapur every night around 9pm and reach 11 hours later, the next morning. We have booked tickets in one of these for tonight. During the day we stayed in our hotel room, watching India’s 1st innings batting in their 2nd Test match against South Africa. It has been a very relaxing day and we now feel ready for the long, overnight bus journey to Aurangabad !

2 Responses to Valentine’s Day at Kolhapur