Disappointed with Guwahati, we desperately looked through the guidebooks for some recommended travel experiences in Assam or the neighboring state of Meghalaya. I guess we weren’t in a mood to waste any time especially since soon it would be time to wrap up this wonderful traveling life sigh! 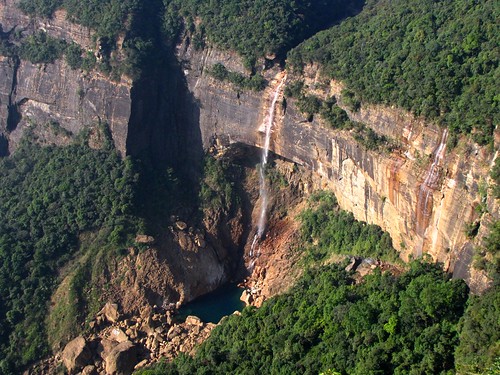 Apart from the national parks of Assam, a stay near which would require prior booking, Cherrapunjee’s hill forest stood out as an interesting place to visit. We immediately called the only resort that exists out there and were elated to find accommodation. So on the morning of Jan 4th, we boarded a Shillong-bound shared-jeep (Rs.140 per seat) from Guwahati’s Paltan Bazaar and endured a long, tiring ride through intense traffic to Meghalaya’s capital city. There we ate lunch at a small, decrepit restaurant near the town’s chaotic, filthy Bara Bazaar and then took another shared-jeep (Rs.50 per seat) to Cherrapunjee town.

About 15kms before Shillong we passed a lovely reservoir called Umiam Lake. It had a spectacular setting with low, rolling hills surrounding it – this was the highlight of the drive to Shillong. Beyond the city, though, the scenery became greener, less populated and more serene. As we neared Cherrapunjee, a viewpoint off the road gave a wonderful view of the heavily forested hills; it was exactly how we had expected a region that receives some of India’s highest rainfall to look like! However, strangely, the town of Cherrapunjee itself didn’t look green at all. Its hills were covered with dry, yellow grass or at some places, burnt grass – it was completely unexpected. The resort, Cherrapunjee Holiday Resort, is nestled about 15kms from town in the village of Laitkynsew. So we took a cab to there (Rs.300) and were relieved to leave the dry area behind, heading into the green forests beyond.

Situated on the east Khasi hills, Cherrapunjee’s original claim to fame was being the wettest place in the world! Even today it receives a tremendous amount of rain but a neighboring village has received more. The incredibly green cover and innumerable waterfalls over the Khasi hills stand testimony to the amount of water in this region. Famed poet Rabindranath Tagore has epitomized its beauty in several of his poems and this has led to Cherrapunjee being a favorite holiday destination for the Bengalis. In fact, they love coming here during the monsoons to witness its onslaught and revel in it. Cherrapunjee apparently is at its scenic best at that time sounds like a good enough reason to return someday.

The highlight of visiting Cherrapunjee is, no doubt, the hike to what is called ‘The Living Root Bridges‘. The Khasi tribals who live in these forests have perfected the technique of growing the roots of Rubber trees to form bridges across the numerous streams and waterways that dot the hills. They hollow out trunks of betel nut trees and use these as a mould to guide the roots of the rubber trees to grow straight out. Once they are long enough to span the waterway they are allowed to take root in the soil across. This whole process takes about 10 to 15 years – unbelievably amazing stuff!

There are quite a few Living Root Bridges in these Khasi Hills. However one has to trek into the forest to see them. The nearest one from the resort is about 2hrs away on foot while a double-decker one requires a strenuous half-day trek. We opted for the latter as we had a whole day to spare and the inclination for a nice trek. The resort owners arranged for a guide to meet us at 8am the following morning. The guide turned out to be a local Khasi lad named Peter, who had no faith in our walking abilities especially mine! He was sure that we would have trouble completing the trek and looked amused that we were even attempting it well, to my immense satisfaction, we did prove him wrong!

The trek to the double-decker 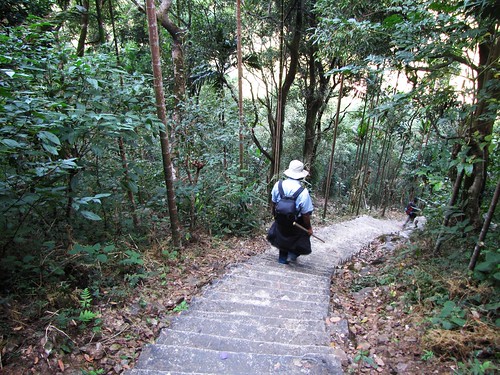 Living Bridge started with a walk from the resort for about 3kms on a mountain road with lovely views of the surrounding mountains and valley below. Upon reaching a small Khasi village, we trekked on a dirt road for another couple of kilometers until we reached some concrete steps that led down into the forest below. At the head of the steps we realized that while the descent from the resort had been gradual, here it was extremely steep and almost a little scary, especially considering that we would have to climb all of it back up; Peter chuckled at our anxious looks. It was unbelievably gorgeous as we descended through thick forests that formed a canopy above our heads and blocked out the strong morning sun! 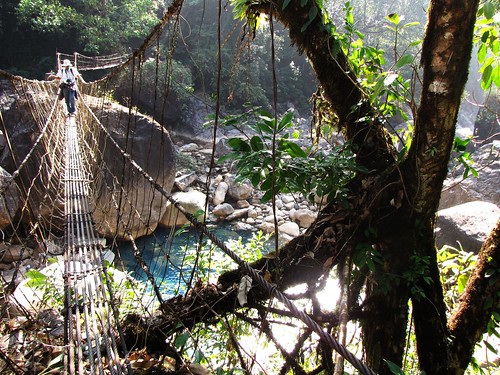 About 2000 steps later when we came upon a Khasi village, I felt my knees starting to strain a bit – we hoped that we were close to the bridge. But there were more steps ahead! This time the descent was interspersed by some spectacular crossings on long, narrow, wire suspension bridges over gushing streams below. This was absolutely exciting but a little nerve-wracking for someone like me who is afraid of both wobbly heights as well as deep waters! But I held my nerves long enough to get across safely and even enjoy the experience!

Before getting to the double-decker Living root bridge, we came across a single tiered one, which was short but quite spectacular. The double-decker one, though, was absolutely phenomenal and totally worth the trek until there. It was amazing how a tree’s roots could have been treated like that! Surprisingly the roots were quite strong, hardly bending under our combined weight on it. We spent a few minutes here before continuing on for another kilometer through the thick forest to a natural pool of crystal clear water where some of our fellow guests from the resort were swimming and relaxing. As they had an elderly couple amongst them, they had opted to take a cab from the resort to the head of the steps to save on the 5km walk – a smart option but we wondered how that elderly couple would manage to climb back to the top! We later learnt that they had managed quite well – hats off to them!

We spent about 45 minutes at the banks of the beautiful pool enjoying the lovely scenery and some Aloo Parathas that we had packed as lunch from the resort. It was a beautiful, sunny day and we once again regretted not having learnt to swim ye. 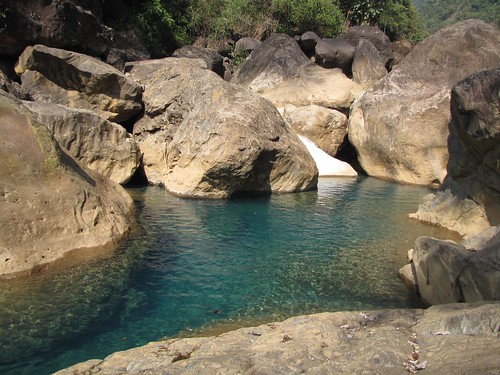 At around 1pm we started our long, tiring trek back to the resort. The steep climb back up to the road was as tiring as we had expected but keeping our minds focused on counting them helped us along. At the top we were exhilarated at having done it but the final 5kms back up to the resort was even more tiring. Peter expected us to call for a taxi but Madhu and I slowly trudged back and despite a couple of muscle cramps, made it to the resort by around 4:30pm with a smile on our faces – it had been a fabulously adventurous day!

The following day we checked out of the resort and hired a cab to take us to some of Cherrapunjee’s other attractions before dropping us off at Shillong for the night. Our first stop was at a viewing point to look at a huge rock formation called Pillar Rock. It’s a huge boulder, which looks unique because of its size and shape, but is not really a must-see attraction!

From there we were driven to Mawsmai 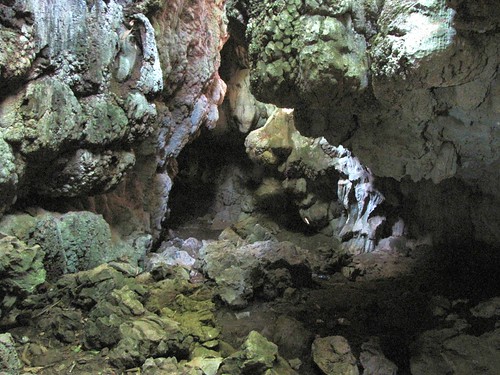 Cave. It is a 150m long cave through which visitors can traverse admiring the weird contortions of the rocks within it. The cave is completely lighted so it was easy to walk through. We were able to walk upright through most of the passageway but at certain points had to get down on all four to wriggle through a tight space or lower ourselves over huge boulders. It was an interesting experience especially because the cave has been nicely maintained by the authorities. Of course, there were the usual bits of trash left behind by the insensitive tourist but on the whole the place was quite nice!

Later we stopped at what is touted as the 4th

tallest waterfall in the world: Nohkalikai Waterfalls. Before checking it out we ate a small restaurant near its entrance for lunch. The food was refreshingly simple and well-made, not to mention cheap at just Rs.25 for a plate of 2 Chapatis and a sabzi!

A nice viewing platform has been built for visitors to be able to view and photograph the wonderfully photogenic Nohkalikai waterfall, which is right across on a lower hillock. Since the viewing platform is at a higher elevation than the top of the waterfall, it didn’t really look like it could be the 4th highest waterfall in the world. But it is definitely quite spectacular in spite of the fact that it was winter and water levels were low. The water collected in a wonderfully blue pool at the base of the waterfall and this, in addition to the intensely green surroundings, gave the place a picture-postcard look! We loved it!

There are a couple of other waterfalls in and around Cherrapunjee, which would have been most spectacular during the monsoons. We skipped them and opted to head to Shillong directly. Cherrapunjee fascinated us with its unique landscape and varied points of interest. After talking to fellow travelers and the resort owners we think that a visit during the rains would be quite magical! They say that just from the resort grounds visitors can spot about 15 to 20 waterfalls in the surrounding mountains – it must be absolutely spectacular! Maybe someday when the monsoon blues are too much to bear, a break at the Cherrapunjee Holiday Resort would be just the right thing to do!