From what we read and researched we knew that Shillong isn’t really a must-visit place in the Northeast travel circuit. However it was on our way from Cherrapunjee to Guwahati, so it made sense to stop for the night and rest. The following day before continuing on to Guwahati we looked around a bit.

Shillong’s top attraction is the 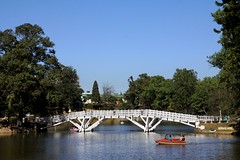 British-era Ward’s Lake, which was just about 5 minutes away on foot from Police Bazaar where our hotel was located. Built in 1894 in memory of Sir William Ward, the then Chief Commissioner of Assam, the lake has pretty blue waters with a white bridge spanning its center. Albeit small, it’s quite a picturesque place! We had a nice time strolling around its banks especially since it was a weekday morning and there was hardly anybody else around. At one end of the lake’s grounds we found

a few ducks and geese lounging in the grass with their little ones – they gave us the perfect photo opportunity!

Later we took a cab to the Don Bosco Center for Indigenous Cultures, which is a little away from the center of town. This brand new museum, inaugurated by Mrs. Sonia Gandhi in 2005, is dedicated to showcasing the entire north eastern region’s culture under one roof! The museum is about 7 stories tall and has been built on quite a lavish budget. We were met at the entrance by a pleasant staff 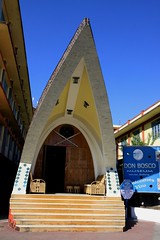 member who explained the layout of the building and how to make the most of our visit. We started with the galleries on the basement floor and then slowly worked our way up to the top. Each floor had a gallery on a specific topic starting from prehistoric man to the present day culture of the tribal regions. The textiles, jewelry, musical instruments and handicrafts from these areas were the best displays and I enjoyed them the most. Each gallery had a computer with a large LCD monitor where visitors could get more in-depth information on the stuff displayed.

A fabulous viewing gallery atop the museum called Skywalk offers fabulous views of Shillong. The wonderful mosaic tile flooring of the terrace added to the ambience of the place and we really enjoyed the space!

Back in Police bazaar, we had a long lunch, retrieved our bags from the hotel and then found a shared-jeep ride back to Guwahati at around 3:30pm. With heavy truck traffic along the way, we made it there only by around 8:30pm.

Meghalaya’s western Garo hills are also considered to be quite gorgeous and it was on our itinerary. But while we were in Guwahati, major clashes broke out between two different tribal groups causing villages on the Garo hills to be burnt down and a huge exodus of people to the plains of Assam-Meghalaya border – the whole area was reported to be in chaos. Sadly, we had no option but to stay away.