Our main reason for getting to Bhubaneswar was to visit the UNESCO World Heritage site of Konark. Although we are not religiously inclined, we decided to visit the famous Jagannath temple of Puri as well since we were in the area. Regular buses connect these two places with Bhubaneswar and each other but since we were not in a mood to rough it out, we took the easier option: renting an Indica car for Rs.1200.

Konark lies some 65kms east of Bhubaneswar and is most famous for its black-granite temple dedicated to the Sun God. Since the temple is listed under the World Heritage Site, we expected the area to be very well-maintained. However, even though the temple complex was as expected, the surrounding area was as chaotic as it can get with stores, restaurants, parking lots and tons of litter – not a pleasing sight!

The temple was built in the 13th century by the then ruler of the eastern Ganga dynasty, King Narasimhadeva I. The most unique feature 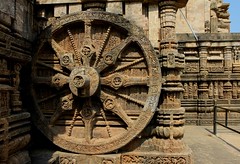 of the temple is that it has been built as the chariot of the Sun God with 12 pairs of wheels, drawn by 7 horses. The shrine sits atop a large platform, which has remnants of the seven horses that used to straddle either side of the steps that lead up to it. The wheels, which line the walls of the platform, are mostly intact or successfully reassembled by the ASI. For some strange reason we had expected the wheels to be much larger and more chariot-like than they actually are. So we were mildly disappointed with the architecture.

Also, sadly, the temple is pretty much in ruins today. The inner shrine and the Vimana that topped it are completely gone with just a few pillars propped up to show their original positioning. It is said that the east-facing temple is so perfectly designed that the first rays of the morning sun would hit the inner sanctum and illuminate the image within.

There are various theories about the image of Sun God, which was enshrined in the temple. Optimists believe that it was saved by the priests of the temple before 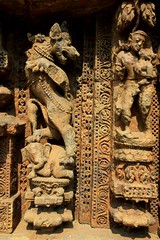 it was plagiarized by invaders and that it is the same one that is now in the safe hands of the National Museum of Delhi. Thankfully, the Vimana atop the sabha mandapa that fronts the inner sanctum is intact and gives the temple at least some shape and form. However, the mandapa is completely blocked with stone debris and cannot be entered. The beautiful Natya Sabha where dancers and musicians performed in praise of the Sun God exists in parts and still looks gorgeous!

We made the mistake of hiring a guide to tour the temple complex, which was a complete waste of time and money. Unlike the south-Indian temples where there are tons of images of deities and their different avatars that need explanation, there is not much of that in Konark. The sculptures are mainly of dancing women in beautiful poses, amorous couples and of the main Trinity of Hinduism – none of these needed any explanation! 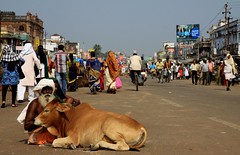 by the seashore and gave us beautiful views of the Bay of Bengal. In the small temple-town we headed straight towards the Jagannath Puri temple, the Vimana of which could be seen from quite a distance! The main avenue leading up to the temple was surprisingly quite wide and lined with a chaos of stores and restaurants on either side. If it had been a little more organized the place would have looked so much nicer! To manage traffic, cars are not allowed after a certain point. So we parked and then took a mini bus, which starts from the parking lot and drops visitors off some 200m before the temple entrance. The cost of Rs.7 per ticket included a return ride as well.

Built in the 12th century, Jagannath Puri temple is very sacred to the Hindus as it is believed to be one of the Char Dhams (four pilgrimage sites) that a Hindu must visit in their lifetime. Today, the temple is most famous for its annual Rath Yatra where the image of the enshrined deity (Lord Krishna) is taken out in a grand procession through the streets of the town.

As expected the entrance to the temple was terribly chaotic and rushed. We removed our shoes in a shoe-stand and since bags or cameras are not allowed, took turns to visit. As I walked in through the eastern gate along with a rush of other devotees, we were directed to go around the complex in an anti-clockwise direction, which was surprising. I noticed that the smaller shrines were as exquisitely carved as the big one. Inside the main shrine, the walls and ceilings have been freshly painted with garish colors but it didn’t take away from the feeling of antiquity within the prayer hall. I got a brief darshan of the enshrined image of Lord Krishna (avatar of Vishnu) after which I completed 3/4th of the parikrama (albeit in the opposite direction) and exited the complex via the southern gate. It wasn’t fun to walk barefoot on the cow-dung-littered streets back to the eastern gate where Madhu was waiting for me.

For lunch, we stopped at one of the many restaurants that line the main avenue. There we had a fabulous Orissa Thali, which came with a large bowl of rice soaked in diluted curds with a few spices and smaller bowls of vegetables and salads. It was an awesome meal especially since the curds were quite cooling after the terrible afternoon heat outdoors. Later we caught another mini-bus (they stop by at a pretty good frequency!) back to the parking lot where our taxi was parked.

On our way back to Bhubaneshwar, we stopped at the village of Pipli 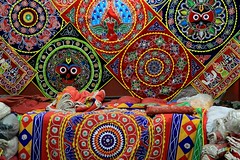 where a colorful string of stores sell local handicrafts. These mainly comprise of wall-hangings or lamp-shades with applique work and beaded purses/handbags. It was fun browsing through the stores but they all seemed to stock pretty much the same things. The items were all reasonably priced so we ended up buying one rectangular wall-hanging with applique work and a couple of beaded purses for our nieces.

Just before entering the city of Bhubaneswar, we stopped by 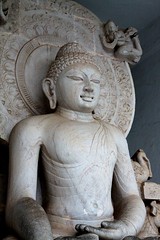 the beautiful Shanti Stupa (Peace Pagoda) that sits atop a small hillock overlooking the area where the great Kalinga battle is said to have been fought in the 3rd century BC. It was built in 1972 by a Japanese group to commemorate the battlefield and its importance in finally bringing about peace to the region through Buddhism. It has four fabulous statues of Lord Buddha in various forms and has wonderful views of the surrounding countryside. By the time we got here it was late in the afternoon, giving the place a gorgeous evening glow! So glad we stopped by!

Overall, Konark didn’t impress us as much as some of the other Orissa temples had. It is gorgeous, no doubt, but because of the destruction of its main tower and inner sanctum, the temple looks incomplete and not as grand as the better-preserved ones we’ve seen so far in our travels. Nevertheless, it was worth a look as it was always on our must-visit list. With this and Puri, we’ve finished our temple tour of the east and are now looking forward to the varied landscape and culture that the north-eastern states have to offer!