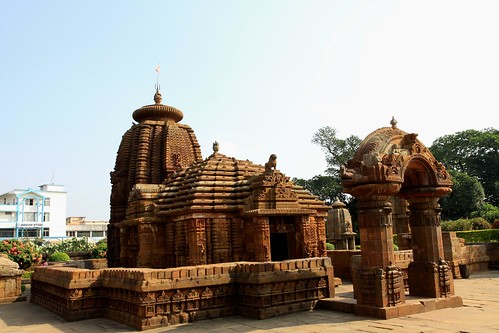 It’s amazing how magnificent temples of varied architecture & styles are spread all over India with some concentrated in one area, prompting the town or city to call itself a ‘City of Temples‘. So far we’ve already been to two self-proclaimed temple-towns: Nasik & Kumbakonam. Each gave us a flavor of the unique architecture of that region. Bhubaneswar has been no less!

As usual we tried to get train tickets from Hyderabad to Bhubaneswar just a day before the intended trip. Unfortunately, we couldn’t get any. Instead we booked overnight bus tickets to Vishakhapatnam and stayed there for a night before boarding a Bhubaneswar-bound train the following day. Later we realized that we could have simply flown there from Hyderebad for Rs.8200 instead of taking a detour via Vizag, which cost us a sleepless night in a bus, an entire day in a city that didn’t have much to offer and almost Rs.6k (Rs.1500 for overnight bus to Vizag, Rs.1800 for one-night stay, Rs.500 for food, Rs.2000 for train to Bhubaneswar)!

The city has a past that dates back at least 2000 years and is most famous, or rather infamous, for the great Kalinga war, which was fought in the 3rd century BC in an area called Dhauli some 8kms south of the city center. The blood bath caused by that war evoked such a sense of guilt and regret in Emperor Asoka that he turned to Buddhism for atonement. Since then a succession of rulers including those from the Ganga dynasty have built some beautiful Hindu temples between the 7th and 13th centuries.

The modern city of Bhubaneswar came into existence when it became the capital of Orissa in 1948. It is a planned city like Chandigarh and was designed by a German architect. However, while Chandigarh has wide, long avenues with neatly divided neighborhoods (or sectors) that look completely unlike any other Indian city, Bhubaneswar doesn’t look all that methodical. Most areas seem to center around a square or shopping area and have small patches of greenery, which are now almost lost amongst the burgeoning needs of the population. But one thing that immediately struck us was its short daylight hours as compared to the rest of the country. Here, especially now in winter, it starts to get dark by 5pm, which is rather sad and almost a little depressing. I remember my father-in-law once mentioning that our eastern states would have benefitted from a Daylight saving schedule like the ones in place in the western countries; makes complete sense!

On our first day in town, we headed to Udayagiri & Khandagiri hills, which are about 6kms 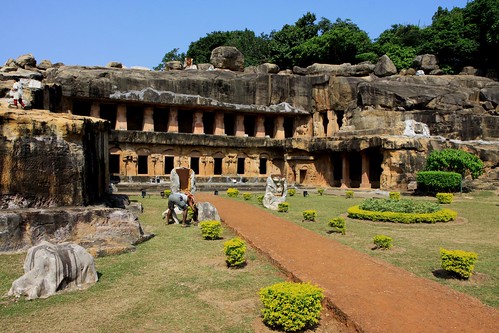 west of the city-center. An auto-ride cost us Rs.80 each way. The hills have rock-cut shelters that were built by Jain monks as far back as the 1st century BC! They are both under the protection of the ASI and have been quite well-maintained. One ticket of Rs.5 each allowed us entry to both hills. The Udayagiri hill is the nicer of the two as it has some wonderful caves with ancient carvings. With our guidebook in hand we strolled through the entire complex at our own pace and didn’t bother with a guided tour – it wasn’t necessary! We started with the caves right in front of the main entrance and then worked our way around in an anti-clockwise direction. The most notable amongst the caves was the 2-storey Cave 1 known as the Queen’s Cave. It had lovely carvings of battle-scenes and symbols pertaining to Jainism. Another cave, Cave 10, called the Ganesha Gumpha had a wonderful pair of elephants guarding its entrance. Cave 14, Hathi Gompha, had a 17-line inscription relating to its builder, King Kharavela of Kalinga. From here we had wonderful views of Khandagiri hill, which is just across the street. The 18th century Jain temple that sits atop it looked wonderful!

Unlike Udayagiri, Khandagiri doesn’t have any caves of note 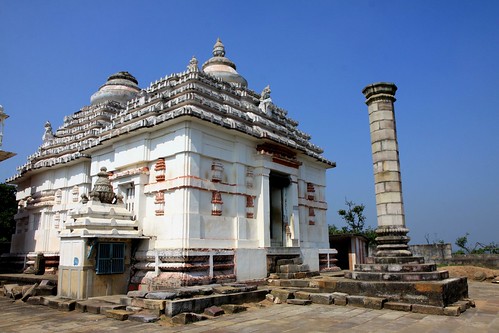 and is still being laid out by the ASI with a proper walking trail or steps; we saw many laborers at work. The temple at the top is pretty but it looked nicer from across the street where we could get a good shot of the entire complex. Lovely, marble images of the Tirthankars were enshrined within. Outside the temple entrance a man guarding the shoe stand claims to be able to describe a person’s characteristics based on the name – it was interesting, but not very true. The hill is infested with large gangs of Langurs, who, thankfully, are a lot less intimidating than the brown Macaques.

We started the temple tour of the city with the mighty Lingaraj temple. The entire complex of several shrines was completely built out by the 11th century. However, certain parts of it are probably 1400 years old! As the name implies, the main temple is dedicated to a Shiva Lingam. At 55m high, its Vimana towers over every other temple in the city. The outer walls have exquisite, detailed carvings and pay homage to Hari-hara, the composite image of Shiva & Vishnu. Unfortunately, no cameras are allowed into the temple. So Madhu and I took turns to visit the complex. It’s always difficult for me to appreciate a place fully when I’m forced to walk alone to check it out. I guess I’m so used to having Madhu around and walking leisurely that these one-off instances feel a little annoying! But the architecture of the shrines more than made up for the annoyance and I returned outside wishing that cameras had been allowed and we had had more time to explore the complex together.

From here we continued on foot, asked directions at every 100 meters, passed the Bindu Sagar tank around which the temples are scattered and 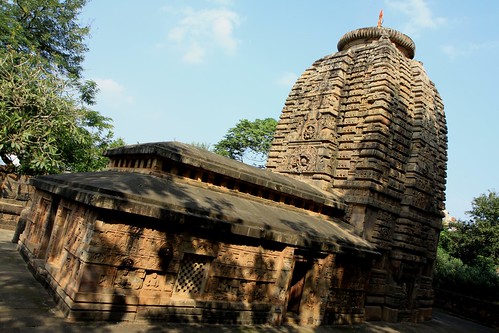 eventually found the beautiful Parsurameswar Temple. It sits in a small courtyard right across the street from a school. We found the premises to be well-maintained and absolutely clean – there was no vandalism either – amazing! Built in 650 AD, this was the oldest temple we visited in Orissa. It is said to be the best preserved temple of the early-Hindu architecture. We loved the carvings on its outer walls and the simple inner sanctum, which housed a Lingam.

A grassy lawn separates this temple from another complex that houses the Siddheshwar and Mukteshwar temples. They were both absolutely gorgeous and beautifully set amidst flowers and lawns. Of the two, Mukteshwar temple was more striking because of a beautifully arched and carved gateway in front of its entrance. It has a Buddhist touch to it and is therefore quite unique. In fact, this lovely piece of architecture is prominently displayed in almost all of Orissa’s tourism-related advertisements and hoardings. A low, 4ft tall with even more carvings surrounds the temple and merges at the gateway in the front. The temple is from the 10th century AD and is one of the most compact ones found in Bhubaneswar.

A couple of blocks from here is the beautiful Rajarani 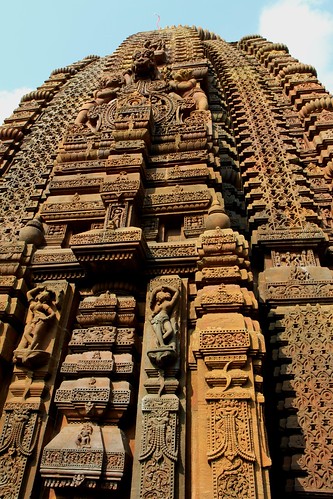 temple! This is the only one, of the four we visited, that had a ticketed entrance by the ASI. We think that’s because of the lovely gardens that surround the temple. Built in the 11th century, the temple is named after the type of red sandstone used to build it. It’s one of the few temples dedicated to Lord Brahma and just like the ones we saw before, has fabulous carvings all over! The carvings are mainly of women in different postures like holding a child or a mirror, dancing or playing an instrument – simply marvelous work!

Bhubaneswar’s State Museum is also supposed to be quite nice and was very close to the hotel that we were staying in. But since it was a Monday, the museum was closed and we never got a chance to visit it. Bummer!

Although, this city was never on our must-visit list (even though Konark always was), we are now quite glad that we got a chance to check it out, especially as it gave us a flavor of the unique temples of the east!