Situated about 162kms from Mamallapuram, Pondicherry was a French colony until 1954 and was known as Pondicherry right until 2006. The guidebooks said that it has retained a little bit of the colonial flavor and charm – Madhu and I set out in search of it!

We left from Mamallapuram in a portly Ambassador (I thought these plied only in Kerala!), hoping to be at our destination well before lunch. As luck would have had it, Mr. Karunanidhi decided to head towards Mamallapuram at the same time. Police personnel stopped all incoming and outgoing traffic some 10kms outside the village, asking us to pull over and wait till the Chief Minister’s cavalcade has passed. This took about 45minutes! Then just as the traffic was being allowed to trickle through, our Ambassador suddenly decided to give up and we were completely stranded! Luckily, since we were not too far from Mamallapuram, our driver was able to summon another car (NOT an Ambassador!) within 15minutes and we were finally able to resume our journey. I wasn’t too pleased with how the day had begun … but later Pondicherry more than made up for it!

When we had read about Pondicherry’s French influence and its quaint French bungalows, we had imagined European streets and flair. 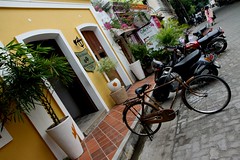 So imagine our disappointment when the car pulled into a noisy, chaotic Tamil Nadu city that didn’t look even remotely connected to Europe! However, the minute we turned off the main road and onto one that bordered the coastline, things changed suddenly! This was the eastern end of Pondicherry’s famed ‘French Quarters‘ – its downtown area. Here the streets were cleaner and less crowded. The buildings did have a bit of a European flavor as well; Madhu and I were immediately intrigued.

We found a fantastic heritage hotel, Les Hibiscus, right within the French Quarters and booked ourselves in for 4 nights. Not that Pondicherry required that many days to explore; the hotel room just seemed too nice to let go of in a hurry!

That first evening we walked along the beach promenade where locals were taking their evening strolls and indulging in snacks sold by beach-vendors. Thankfully, it wasn’t very crowded and we could almost feel Pondicherry’s languid pace. At the center of the promenade is a large statue of Mahatma Gandhi, which appeared to be under renovation. Next to it is the govt-run restaurant called Le Cafe. While munching on excellent sandwiches, we enjoyed lovely sea views from its porch seating. Strangely, in spite of being right by the bay, there was no sea-breeze whatsoever, which was quite odd.

The main attractions in Pondicherry are its churches, a temple and of course, the Sri Aurobindo Ashram. The ashram is located within the French quarters and was within walking distance of our hotel. Security personnel at its gate asked us to remove our footwear at a stand that was provided (free of cost) across the street. We were also asked to switch off our cell phones and maintain complete silence inside the complex. We were directed around the ashram in an anti-clockwise direction starting with a memorial to Sri Aurobindo where many devotees sat and meditated. From here we walked into a hall that had informative displays about the ashram and its founders. Another hall housed a small bookshop where books related to the ashram and its teachings were available. We browsed through all of this and were back out in the street within 10minutes. I was mildly disappointed by the visit as I had expected to see and experience more. But then I guess that can only be for Aurobindo followers and not casual tourists like us.

We visited three churches, of which 2 were across the canal 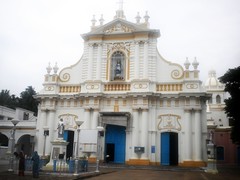 that borders the western end of the French Quarters. This ‘other’ side felt just like any town of Tamil Nadu and had no unique feel. The first church we visited was Our Lady of Immaculate Conception on Mission Street. It is a simple church in white with soft, brown trim and blue doors. It sits in a large stone courtyard and looks like a scaled-down (or simpler) version of the Portuguese churches we saw in Diu. It’s a 17th century church dedicated to St. Peters.

The Sacred Heart Church sits by a busy street and a school. It has a Gothic facade painted in cream with a dark-brown trim. It looked quite imposing from the outside. Inside, it had a similar paint scheme with lovely stained-glass windows. 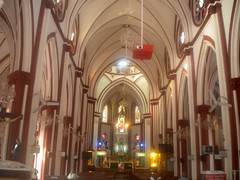 The ceiling soared above us in arches and gave the church a very grand feel! It’s more than 100 years old but didn’t feel that way because the paint looked fresh and the interiors seemed to have been recently renovated as well. Of the three churches we visited, this one had the nicest facade.

The third church is located within the French Quarters and has a pretty pink exterior. It’s called Notre Dame de Angels (Our Lady of Angels). When we walked up to it we saw several laborers milling around its compound; it seemed to be under some extensive renovation. Its main gate was closed but we could enter through a side entrance. The interiors were simple and austere!

One of Pondicherry’s most popular temples is the Managula Vinayagar Temple dedicated to Lord Ganesha. Since it didn’t have any architectural significance we weren’t too keen on checking it out. 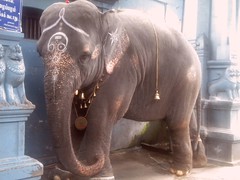 However, the guidebooks mentioned that an elephant at its entrance lovingly gives out blessings (for money, of course!) and I knew I had to see it. It is located within the French quarters on a street named after it and is just a couple of blocks from the Aurobindo Ashram. As expected a sweet-looking jumbo stood near its entrance swaying gently as visitors surrounded her with coins and bananas in hand. She accepted the coins in her trunk and then placed its tip gently on the head as a blessing. It was a sweet sight but we couldn’t ignore the fact that the poor animal was being made to stand around constricted to that corner of the temple all day.

On the outskirts of Pondicherry, some 15kms northeast lies the enigmatic Auroville township. Madhu and I rented a 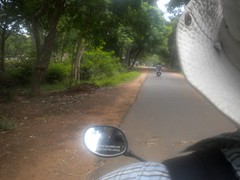 two-wheeler for the day (Rs.200) and set off as per directions given by the proprietor of our hotel. About 8kms north of town, an easy-to-miss yellow sign by the road indicated that we should take the next left towards Auroville. From this junction it was another 7 to 8kms inside. Road signs at regular intervals led the way and took us past villages and large farm lands that looked quite gorgeous. The route got very scenic and the two-wheeler just added to the fun!

Auroville was founded by The Mother (Mirra Alfassa) from Sri Aurobindo’s ashram as a place for believers to live freely as a community, emphasizing the spirit of humanity with no distinction based on nationality or race. It was founded in 1968 with a handful of people. Today, it is a well-laid out community housing about 2000 residents, all followers of Auribindo’s vision, belonging to some 43 different nationalities. The township has its own schools, hospitals, and industries that generate employment and help in making it self-sufficient in most aspects.

We parked our two-wheeler in the Visitor Center’s parking lot and then walked over to the Visitor Center complex, which consisted of an information hall, some stores and a nice cafeteria. Since we hadn’t had breakfast, we first took care of our tummies before heading back to the information hall. It had pictures and displays on the founding of Auroville, its founders and their beliefs. It was all quite interesting.

A man sat in a corner of the hall offering passes for visitors to take a long-distance peek at Auroville’s pride and joy – the Matrimandir. We took 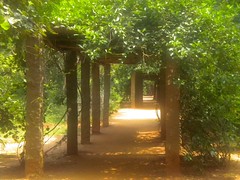 2 passes from him and then set off on the 1km walk to it. The path leading to the Matrimandir started right by the visitor’s center and headed into the woods beyond. It was a gorgeous route and parts of it were shaded by trellises covered with creepers. We strolled along slowly enjoying the lovely country air. About half a kilometer later the path hit the street and then ran parallel to it until we came upon a set of gates that enclosed a large courtyard. For people unable to walk this distance, a golf-cart ride is also offered!

A beautiful, old banyan tree sat at the back of the courtyard with branches that had become tree trunks. Plenty of cemented seats were provided below the shade of the tree. We sat here for a few minutes but not for long enough; the lucky residents of Auroville probably have all the time in the world to spend an afternoon lazing here! From here the view-point for Matrimandir was just about 100m away.

The Matrimandir was originally conceived by the Mother as a place for meditation. Construction began in 1971 and took a good 37yrs to complete!

I was amazed that a modern structure (with all the modern equipment and resources on hand) could take so much time to build. But when we finally saw the structure, it did look like something that would take that long! It’s a huge golf-ball-like sphere. Basically, a central dome that houses the meditation chamber has been covered with small, circular, gold-colored discs that reflect beautifully in the sunlight. The meditation chamber is said to contain an optically perfect crystal ball, which is supposed to enhance meditation. The sphere sits in the center of large, manicured grounds that can be explored provided prior permission is obtained from the Auroville administration – not really sure how to go about doing that! From our vantage point we could only gaze at the grounds in wonder and awe, envying the people who had access to it.

Back at the visitors center we browsed through the stores and found the quality of stuff to be exquisite. My favorites were hand-made candles of all sizes, shapes and scents. But mainly the stores seemed to be specializing in locally-made, western-style clothes using local materials. We didn’t buy anything but enjoyed browsing thru it all and then ended our visit with another visit to the cafeteria – food was really good!

With nothing more to ‘see’ in Pondicherry, Madhu and I spent the rest of our time walking the quaint streets of its French Quarters, trying out different restaurants and window-shopping at all the gorgeous handicrafts stores. Overall, Pondicherry surprised us with its laid-back charm. It’s not really a tourist destination. It’s one of those places that one could head to when they need to unwind and relax. All they need to do is find a charming boutique hotel to stay in and get pampered, and then walk, ride-a-bike and dine their days away!

One Response to Pondicherry, a charming former French Colony