One of the most iconic places of religious importance 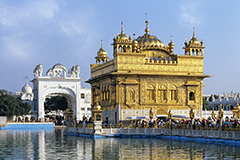 for Sikhs, the Golden Temple (Sri Harimandir Sahib) in Amritsar is a destination where people can come to express their faith in the face of true tolerance and equality.

An important pilgrimage site, Sikhs come from all over the world to pay their respects. The construction of the temple (Gurdwara) was authorized by the fifth Sikh guru, Guru Arjan, in the 16th Century in the hope that 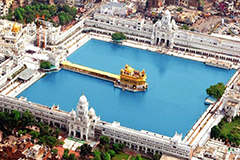 people of all creed and religion could use it as a holy place to worship God.

It was completed in 1604 with its final design featuring four distinctive doorways to symbolize Sikhs open embrace and acceptance of other ethnicities and religions. It was at this time that Guru Arjan placed the Guru Granth Sahib, a holy book of scriptures considered to be a spiritual guide, inside the 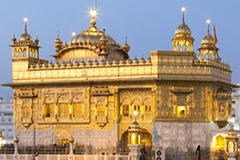 Its distinctive architecture differs from other normal Gurdwara’s that are built at a high level. The Golden Temple has been designed in such a way that devotees have to descend down steps rather than climb them to resemble an act of humility. 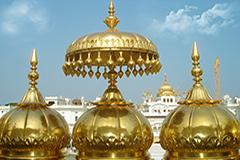 Maharaja Ranjit Singh decreed that the lotus shaped dome was to be covered in 100kg of gold, hence its name.

Within the temple, there are many shrines dedicated to noted Sikh gurus and saints. There are also many plaques that recognise important historical Sikh events.

Over 100,000 people visit the Golden Temple every day and as a visitor, it is critical to respect the sacred purity that is so revered by pilgrims. When entering the Gurdwara, you must always be barefoot and wash your feet in the small pool beforehand.

Once inside the Darhab Sahib, it is important to sit on 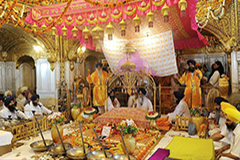 the ground as this is seen to be an act of deference to Guru Granth Sahib and to God.

There is a strict policy against eating meat, drinking alcohol or smoking when you are within the confines of the shrine. Women must be clothed respectfully and have their head covered although shawls can be provided or bought on-site to take home as a souvenir.

The Gurdwara is surrounded by a tranquil lake (Sarovar) which is said to contain holy water or ‘Amrit’. It is advised to allow yourself a few hours to explore the temple so you can absorb the majestic spirituality that emanates from this holy place.